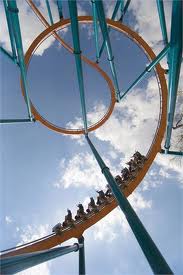 It's that time of the year when we are reaching for any excuse to be angry and not have to go to school.  Red's World Geography teacher was gracious enough to allow him to show the Six Flags video that he made over the weekend.  He didn't get the response he wanted or expected.

There were a couple of students who asked, "Why are we watching this? I hate Roller Coasters!" At least that is Red's interpretation of events.  This may or may not be what actually happened.  According to him,  there were other students who were on their phones texting, and not paying attention.  This is typical behavior for a group of teenagers. In fact not all that long ago we went to a film event after he completed a film camp last summer.  They were playing all of the short movies the students made in camp.  Red complained the whole time.  "This is boring!  When can we leave?"  He asked over and over again, only wanting to stay long enough to see the film that HE made.  I remind him of this.  "That was different.  I was tired," he says.  "Well, maybe the students in that class were tired."

I wasn't there, so I couldn't tell you from his report whether or not anyone had anything positive to say.  He chose to focus on the negative.  He comes home upset, yelling, with the angry face.  I am able to redirect him pretty quickly.  I tell him that all my readers on the blog loved his video!  (Yes...I stretched the truth.) But that was enough to get him off the negative trip...that is until this morning, when it was time to get on that bus to go to school.

He attempts flipping over the coffee table and bangs on a few doors and walls.  We have the run-of-the-mill screaming to the top of his lungs.  He throws a fit like that of your average toddler...only he's 15 years old and nearly 200 pounds.  He refuses to brush his teeth and get on the bus when it arrives.   Once his meds kicked in fully, he calms down, cleans up the mess, brushes his teeth and I take him to school.

Suddenly, he can't handle his classes.  "People in my classes are out of control,"  he says.  "They are loud. I can't handle it."  All of his teachers are mean ...they're not supportive.  It's so hard to figure out what is Live and what is Memorex.  What is real vs. what is imagined, magnified, exaggerated and plain old untrue.

His teachers paint a different picture.  He is passing all classes.  He is doing his work.  He is talking to peers in his classes.  He has a group to eat with at lunch.  Peers are talking to him.  He gets lots of high-fives and hellos in the hallways.  I witnessed a few "What's up man?" greetings this morning when I took him to school and walked him to his BASE class. 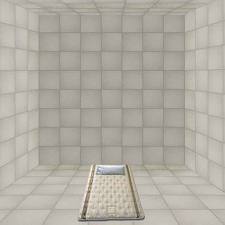 "I dreamed of a white padded room last night."

Show me some love!

Posted by Karen Wesley Writes at 9:11 AM