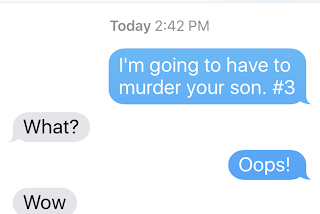 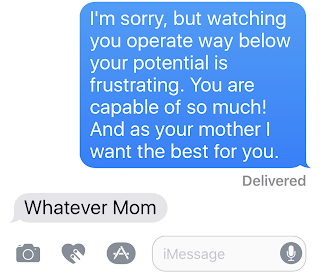 I spent four days this week listening to Kendal talking about his future...
He’s trying to convince me how good of a deal that would be for all of us.  It would save “us” so much money. Which is the translation for —I wouldn’t have to spend my money on my needs. I would have more freedom to spend it on my wants.

-It’s going to be too expensive for me to live on my own.
-Why can't I just move back home?
-Why are you holding a grudge based on how I used to act when I lived here?”
Um …because you traumatized me —for years.
-I’m not like that anymore. Besides, I’m busier now. I wouldn’t be here all the time. I work two jobs.
-Maybe I could go back to school and save money because I live here.”
-What if I don’t have enough money?
-If I drive, what if I get a ticket or get into a car accident?
-What if the apartment isn’t close enough to everything?
-What if I can show you how much I’ve changed over the next 6 months? Then would you let me move back home?

He has been his usual relentless self with these questions and statements on repeat, on a loop over the past several weeks.  When he sees my face, he takes it up a notch.  He must have my attention.
“Mom. Mom. Mom,” all day long!
“I need to talk to you. This is important.” I know I’ve said it a thousand times, but it’s important.
“It’s about my life.”

After all of this extra time with him this week (because he’s taking a break from the gym) I found myself wondering how I ever accomplished anything when he lived here?

I also wondered how in the hell I got myself into having him at my house 4 days in a row?

The time he spent at home brought back not so fond memories of when he lived here. Between the incessant talking, the meltdowns and fights with his brother, arguments with his dad and my mother, I don’t know how I ever put a coherent thought together much less, a sentence or a blog post or an essay that made any sense.

Thinking back, I realize that I was writing for my life. It was all I had. It was survival. I didn’t have a therapist. I was too busy taking him and his brother to various therapies to think about myself.  Writing was and still is, a part of my therapeutic process.  I don’t think I could live without it.

As for Kendal, with any change in life comes with anxiety, fear and “what-ifs.” The same thing happened before he moved out the first time and with each job change or transition.

“I’ve changed mom. I’m not the same person I was when I lived here,” he says.

And he’s absolutely right.  He has grown immensely. He’s working two jobs (part-time). He cooks, shops and takes care of his daily living without prompts (mostly). He makes social plans with friends and is involved with a group at his church. He even plans ahead when a movie is coming out and buys his tickets ahead of time.

I attribute this growth to not having me around as a savior and a distraction. I feel like I am his kryptonite.  (I wrote about that in Top 10 Reasons You Cant Live Here for 5 Years a few years ago before he moved.)

I am the person who pushes him. I am also the person he can always count on. At the same time, it’s like both boys think I am an extension of their brains and they want me to continue doing my part of their thinking.  That impedes progress.

I am so beyond ready for him to move out of the group home. In my opinion, the agency sucks. They don’t meet all of their responsibilities and I believe their staff is counterproductive for him in many ways. For instance, he told me a couple of days ago that one of the staff said, “You’re no different from the rest of these guys. Most of them have tried living on their own, and they all end up back here.”

I don’t know if I believe that is exactly what was said. I mean what adult in a position of helping people would say something so incredibly shitty, right? Yeah, these bitches probably would.

Things get lost in translation sometimes with Kendal. Whatever the case may be, somehow, he is getting the message that living there for an extended period of time is inevitable. That is not the message I want him receiving.

Kendal can come across with an air that he’s better than other people. Of course, he’s not. But, I have raised him to want more, and to speak up for himself.  Sometimes people in authority don’t like that. Especially, if it means that he is making their jobs harder because he doesn’t just accept whatever bullshit they try to sell him. He gets that from his mama and his grandfather (Hollywood). *Smiles with pride.

The ability to speak up and self-advocate is something that the group home staff don’t seem to be used to clients doing. It seems that they are used to serving folks who go along with the program and let them completely control their lives and their money. My son is not that person.

I want continual progress and eventual independence as much as possible for him. He wants that for himself. Of course, as far as he's concerned, it would be a lot better if he could have the best of all worlds. Independence, while we spend most of our money to make it happen. Not going to happen.

His intensive sales pitch almost had me sold on his moving back home temporarily.
And then I woke up! Hell No! You are not moving back here.

I told him if worse came to worse, and we couldn’t find a better option, he could move back here to the house …and I would get my own apartment! Sorry dude. If I can help it, we will NOT live together again. I’m trying to get rid of your brother! Why would I let you come back? My goal is zero people that I once housed in my uterus, living in my house.

I tried to sell him with the pitch, “Girls would rather date a guy who has his own place as opposed to one who lives with his parents.” Eventually, you want to get married. You need to be used to being independent first.

Who am I kidding? I’m not ready for all of the drama that comes with dating. But then again, how will he ever find a wonderful woman to eventually take him off my hands completely?

I would rather see forward movement instead of backward. So, I will trust that he will continue to grow and thrive with more independence.

Besides, I have dreams and goals of my own. Having him live here again would push my dreams further away just like his being here more this week, has pushed my “to do list” behind schedule (more than usual).

By the end of a full day with him talking and repeating, I remember the reason that I am so in love with “not talking” these days.  I crave solitude and quiet.

I remember why my phone stays on silent —the ringing causes me trauma.

The good news? Spending so much time with my son this week motivated me to get my ass up and out of the house to yoga more than I usually do.

Our time together also made me more determined than ever to move him to the next stage of independence, which will be his own apartment —not back home.

Having him move is scary for me too. However, I realize that success comes from taking the steps that scare us the most.  My friend Oprah taught me that. Yep! Me and Oprah are totally pals.