I’ve been on a quest to get to know the woman that I am becoming since my children are older. After years of focusing so much of my energy on them, I am definitely becoming a different person.

The boys are adults now. They are autistic and both have issues with anxiety and depression. They still need me, but they need me less, and that is by design. They need me less because I push them to depend on themselves more.

They are both working now. It’s such a relief to not be handing out money every five minutes. It’s also really good to have them occupied for at least thirty hours a week. I love that they don’t call me while they’re at work.

These days I say yes to myself and more no's to everyone else. This includes my 79-year-old mother who lives with me. Occasionally, I even say no to my husband of nearly 25 years. Sometimes, the more you give, the more the people in your life begin to expect. Before you know it, you're a second class citizen in your own life. I just can’t do it anymore. I can’t live for the sole purpose of taking care of everyone else.

As a result, of taking my life back I have been feeling less depressed. I’m almost afraid to say that out loud for fear of jinxing it.

This weekend I said so much yes to myself, it felt surreal. I was beside myself with happiness and a sense of freedom that I've been craving.

I went to see Michelle Obama here in Austin on her “Becoming” tour. And yes. She was as fabulous in real life as she is in my dreams when we're hanging out together. Seriously...it was exciting to be in her presence. It feels like we are old friends even though she has no idea about our “besties” status.

My heart was full and my eyes leaked with tears before she even hit the stage. Just watching the introduction video with interviews with her family, including her girls, made me teary. Her girls are adorable young women now.

I stayed in downtown Austin after my "Conversation with Michelle Obama." One of the perks of having a husband who travels a lot for business is that I can use points to stay in a hotel now and then. Another perk is that his business travel keeps us from killing each other. Seriously. It’s a good thing because sometimes, I just can’t take it at my house with all of the neediness and the constant phones calls from the child who no longer lives with me. I made it clear to the boys that I would not be available to talk on my two-day me-cation.

The adventurer in me has been buried alive underneath a heavy load of responsibility for the past twenty-five years. Being a wife and mother has clipped my wings and kept me close to the ground for the most part. I am beyond ready to fly.

I spend Friday morning in my hotel room at the Westin. Alan would be joining me later that evening. For the morning and afternoon, I would be on my own. Can I get a hallelujah! I slept until nine, ordered a Continental Breakfast via room service, and spent the morning listening to music of my choice (which included the Bee Gees, Barbra Streisand and Pat Metheny. Pat Metheny is my jam when I'm writing.) I am writing while overlooking the city of Austin. I'm in heaven! Alone.
Around three I think, I better get out of here and feed myself. Hmm. Shall I go downstairs and grab a bite or should I adventure out? Downtown has a lot to offer that my little suburban community does not. F*ck it! Adventure it is! I do enough of the safe thing every day of the week in my boring little suburban community. I’m in the city. The city...any city, gives me life!

I grew up in the city of Los Angeles. I left it behind for the safety of the suburbs, but the suburbs are beginning to literally bore me to death.

I call an Uber and within 10 minutes I arrive on South Congress at one of our favorite places for lunch, brunch, and cocktails --Perla’s. They have a great outdoor patio and the best crab and cheese grits that I have ever tasted in my life.

It is now four o'clock in the afternoon. Between lunch and dinner, the menu is limited. So after I eat my shrimp po'boy, and sip my South Congress Fizz (a spritzer with a punch) I decide to meander around the eclectic boutiques which line the trendy boulevard.

I take my time with no intention of buying anything. Although, I seriously contemplate a handmade silk scarf that is reminiscent of one I bought in France a couple of years ago. In fact, as I write this, I’m regretting that I didn’t buy it. The colors were luscious shades of turquoise and ocean blue. What was I thinking, leaving that behind?

When it comes to shopping, I’m trying really hard to be less impulsive. The happiness that comes from buying a thing is usually fleeting. It eventually makes me feel empty and wasteful. Especially, now since I’m trying to channel Marie Kondo and minimize the stuff in my life.

After browsing, I start walking north towards my hotel when I notice that on every corner there are electric scooters for rent. I seriously contemplate grabbing one to get back to my hotel, but I hear the voice of my husband in my head, ”You know you’re crazy right? You know you could fall and break your neck?”

That’s what he said the last time we were downtown hanging out together and I tried to get him to ride.

I thought ...f*ck it! I could fall. I could get hurt, but maybe I won’t. And if I do, what does that mean? I get to lay in bed for once while everybody takes care of themselves. I can’t lose here.

I pull out my phone and open up the Uber App. I remember seeing a bike and scooter option on it before. Although it was a bit off the beaten path, I was able to locate and Uber scooter. I read the handy-dandy instructions and cautions, one of which was that you should definitely wear a helmet. I did not. It was hard enough to find the scooter. I wasn’t about to try to locate a helmet.

The weather is brisk but I am somewhat dressed for it, with a warm scarf around my neck, and a faux sheepskin vest. I’m just going to try it. I’m going to ride half-way back to my hotel, I say to myself. I’ll stop at the Four Seasons which is about half-way, and then I’ll walk from there.

Again, I hear my husband’s voice in my head, “You’re kidding me, right? You’re not really going to get on that thing and ride down a major street...with traffic?”

Yep! I’m doing it! I would rather die having lived than to live with regrets. I have allowed my anxiety and my responsibilities to hold me captive for far too long. I felt like a high school girl sneaking out to play without permission from anyone except for me.

I zoom through those downtown streets, first on South Congress, where I have to ride on the sidewalk, even though the instructions on the app clearly said, “ride only in the bike lane.” Well, I don’t see a bike lane. I try not to hit any of the pedestrians who are walking on the sidewalk. Once I get past the walkers, I zoom over the South Congress bridge where people hang out to wait for the bats to come out. I turn right onto Caesar Chavez. As I approach the Four Seasons, I think there is no way I’m getting off of this thing. I’m going all the way!

I’m sure that I looked completely out of place with my silver hair, riding past all of these millennials on the scooter. I don't care. The wind is blowing in my face. I feel alive, carefree, and happy as I grip that scooter with everything I have especially, as I ride over dips in the road. The adrenaline rush is worth every little body ache I would feel the next day from holding on so tight. 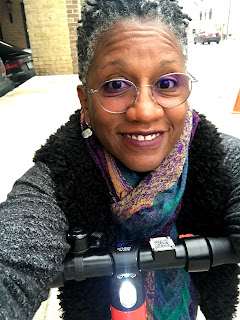 I stop and take a picture before I park. I wish that I was savvy enough to take a video of the ride. But, that would have been an epic fail...as in a definite fall.

This is just the beginning of the rest of my life. I am not totally carefree, but I am taking full advantage of every free moment I have to do what exactly what I want.

And no. I’m not asking for permission.