I Can Not Die 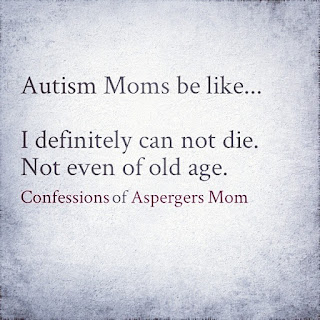 A couple of months ago, in a quiet moment between emergency phone calls (which are not really emergencies) from Red, my 20-year-old son, I thought to myself, "I definitely can not die."

How will these boys survive?

There are so many subtle nuances of life they will never be able to figure out on their own.
No one else will have the time or the patience o deal with them.

What happens when they have to deal with a government agency or a health provider who simply is not doing their job? Believe it or not, it happens.

Will they be able to advocate for themselves?

I spend so much time thinking outside of the box about how to solve problems for these young men of mine.

I am in the background of their lives, flipping tables over to make sure that they get what they need.

Over the years,  I have spent a lot of energy just making sure that providers,  teachers, and administrators are doing their jobs. Even now that Red is an adult, I'm still working with the group home agency, the Department of Rehabilitative Services, Medicaid, Social Security, our local mental health authority, and even the school district Adult Transition program.

The thing is with these agencies and programs is, if you don't ask, you don't receive.  If you're not aware of what's available, you get the bare minimum. If you don't know your rights, you can get screwed.

In the care, feeding and raising of these children, there are times when things are going so horribly wrong, I wonder if they will ever go right.

There are still times when all I can do is laugh, cry or have a drink or three.

There are times when I doubt myself as a parent ...when I feel like I'm doing it all wrong.

I have put so much effort into raising them and advocating for them to get them the supports that they need to be successful, or to at least survive.
Maybe I've done too much.
Maybe I haven't done enough.
I'm too soft.
They are running over me.
They are draining the fricken life out of me!
I hate this job.
I quit.

The truth is, the success or failure of your children is not all about how hard you tried as a parent.
We are a part of their success.
We are not their success or failure in total.
Ultimately, motivation for what they will do with their lives must come from within.
A parent can only plant the seeds, water the plant and in my case, kick a few asses.

We can't walk in their shoes for them.
We can not be inside their heads for every choice that they make.
We can't always be there to whisper, or scream words of caution when they are about to make a stupid decision.
Sometimes, we have to sit by and watch them run in front of the moving train.
It's the hardest thing ever for a parent to do.
We have to let them fall and cheer them on as they get back up.

When mental illness and autism are a part of the picture of your child's life, there are even more facets that we have no control over.

Medication is one big toss up.  It will either help tremendously or send them further over the edge. I've seen both. Have I told you how much I hate psychotropic medications, especially during puberty when their bodies are growing and changing?  It's madness! But we are desperate to help them, by whatever means necessary.

Therapy often feels like a gigantic waste of time, energy, and money. Again, we're desperate. We will give anything and everything for the off chance that something will work. Some days, therapy feels like a big scam that we buy into to give ourselves hope that behavior and communication will get better.  (One day, I will finish my post about ABA therapy, and how many headaches it gave me. I wanted to strangle our therapist.)

With each new therapy, new teacher, counselor, and mentor, we pray that our children will put two and two together and make four.
It could happen.
What else can we do other than put our feet on the ground every day and keep moving forward, trying something, anything, everything, to help them make even incremental progress?

Red has worked for the YMCA for the past two years after high school.
When he was in the vocational program in high school, he could not get hired to save his own life! There were days, where he was just too far off on the deep end of anger and depression. He spent a great deal of his time engaging in arguments and conflict with job coaches instead of allowing them to help him.

Because of medication and a horrible diet, he had become excessively overweight.  This summer, he was so out of sorts. I  determined that most of the medications could not possibly be helping him. Two of them were definitely a part of the weight gain issue. We made some changes which at first, made things worse.  We went back to the drawing board, this time with another doctor. It was a painful process, but it was well worth it in the end. We were able to get the number of medications down to just two that seem to be helping him.

After a prompt from his doctor and a combination of being on the right medications, he made some changes in his diet.  At first, we kind of forced him to start exercising.  Basically, it was like, we're not picking you up from the YMCA until you swim at least 10 laps.

When he saw himself starting to drop weight, he decided to completely change his diet and start working out five days a week. He found an online program to follow, which taught him about advance meal prep, and high-intensity work outs to help him get fit. He became obsessed with it. These changes  have led to over 100 pounds of weight loss!

Recently, when the YMCA was about to lay him off because they couldn't give him enough hours, with my prompt and his job coaches assistance, he found another job before the layoff could happen. He is now working at another major gym.

Several months ago, we had to have him move out of our home and into a group home. It was abundantly clear that neither of us could survive much longer living under the same roof. Aside from his behavior in our house, deep inside I knew that he needed a nudge, or rather a swift kick, to help him get the motivation to move forward into adulthood.  I hate to admit it, but the closer he was to his mommy, he saw absolutely no reason to grow up.

Now, the boy who in high school,  could almost NEVER get there on time, is now getting himself to work for a shift that begins at six a.m.! The night before, he arranges his taxi ride to pick him up at 5:15 a.m.

He prepares himself for work before bed.  He arranges his bag with his clothes for working out after work, showering and changing so that he can go on to his 2nd job! Yes. He is volunteering at a local middle school helping special needs kids with Science and Physical Education. This is the middle school where he was once in the self-contained behavior program.

Speaking of showers ...his transition teacher has been able to get him on a shower and laundry schedule so that he will always be fresh and smelling good when he walks into one of his jobs! I tried for years to do this! He would never listen to me.

When Red finished high school, he was sure that he could NEVER be successful in any college classes. "I hate academics!" he would say. In high school, he required a lot of one on one support to stay on track.  However, one of the things I had him do while in High school, was work with other special needs students who had more challenges than he does.  I figure the best way to stop thinking and worrying about yourself, is to engage yourself in helping others. The special needs students loved him, and it did wonders for his self-esteem.

This lead to him deciding that this is what he would like to do with his life. He wants to others with special needs. Recently,  he earned his Paraprofessional Certification from our local community college! He hopes to be hired full-time this coming year as an Instructional Assistant in our local school district! Hence, he is volunteering now, in hopes to gain exposure and more experience so that he can ultimately become a full-time employee.  (Yeah. Another one of mama's ideas.)

He still has a way to go towards independence. I still worry ...I still wonder if he will be able to make it on his own.  Living in that group home where things are less than ideal has certainly helped with his motivation to want his own apartment.  He will probably still need a certain level of support no matter what, at least for the next few years.

I pray that he will find an awesome roommate be able to get his own place soon. At least, that is his goal.

Maybe someday, he will find a wife who will compliment his strengths and weaknesses.
Dear God, I hope so!

Meanwhile, I hope to graduate someday further into the background of his life, playing a much smaller role. I want to retire from motherhood. I daydream about this every single day. Yeah. I know we can't really retire. I would at least like to take a sabbatical!

There are still many "what ifs."

At the same time...
There is progress.
There is hope.

Did you enjoy this post? Share it on social media!
Posted by Karen Wesley Writes at 9:46 AM