It’s been a while since I’ve checked in with you. Maybe you noticed that I haven’t written much about the boys lately.

You know what they say about the things in your life that you give the most energy, seem to expand. Well, I'm trying not to focus as much energy on them. I do share their accomplishments regularly on my Facebook page. (And if you don't follow, you really should. I'm hilarious. A legend in my own mind.) However, my writing has taken a different turn.

It was beginning to feel like the more I focused on controlling certain outcomes with them, the more frustrated we all were. It certainly was not changing anything about their journey. They are going to make their own choices and mistakes. There is nothing I can do about it. They are adults now, and though they have challenges, they are both capable of making their own decisions when it comes to the trajectory of their lives. My input is only met with objection. It’s a waste of my energy and theirs. So basically, I try to ignore them as much as possible, letting them live their best lives while I try to live mine.

I'm making a concerted effort to spend my time and energy on me ...my happiness, my “Becoming” (as Michelle Obama says) whoever it is that I am supposed to be at this point of my life. There are days when it feels strange to think about what I actually want and what I enjoy. I am absolutely in love with the ocean these days. I try to dip my toes in one as often as I possibly can. In the past few months, I have hit the Pacific and the Atlantic Ocean. Next, I will dip into the Caribbean Sea when we go to Jamaica to celebrate our 25th wedding anniversary next month.
All of these years in Texas with a laser focus on the needs of my children, I had no idea how much I missed living near the water and how soothing it is to my soul. (And of course, now I can't afford to live near the ocean. Unless you all want to send in donations.) The ocean gives me life and energy. It sure feels good to pay attention to me after years of not, with any kind of intention.
~~~~


On Mother’s Day this year, I woke up with zero enthusiasm about celebrating the day. I’m lucky enough to still have my mother with me. She’s literally with me...as in living in my house, in what used to be my dining room, where she’s been for the last ten years. (It was supposed to be temporary. But when you're knee deep in trying to keep your teenagers alive, figuring out what to do with your mother, sits on the back burner). Does that sound exhausting? Trust me. It is.

I have no energy for making a big “to do” for her Mother’s Day. I bought her a flowering plant. A beautiful Kalanchoe, which I hope will be in bloom for months to come instead of the shortened days of cut flowers. 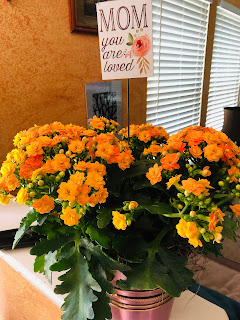 I’m burnt out on holidays, and expectations. It’s exhausting. So much of my energy, time and patience was used up raising my children. Now that it’s becoming apparent that my mother needs more care and attention, I’m finding that I have very little energy for it.  I do the best that I can while trying to keep my own head above water and out of depression.

I haven’t looked forward to any holiday in years. There were too many years of shit hitting the fan on any day that’s supposed to celebrate me. I have been pre-conditioned to think on any given holiday, ‘Nothing about this day will be fun. Something about this will probably mean extra work and a headache.’

(Did I tell you he’s working thirty to thirty-five hours as a Prep Cook at Panera? Yep! He’s been working there since November and so far he loves it.) He’s taking a break from college and I’m just rolling with it. Letting him live his life, without a lot of input from me.

Kendal is still living in San Antonio with his older brother, Adrian. On Sundays, he usually goes to church first thing. I receive my first phone call from him by noon, before he even leaves the lobby of the church. But this Sunday at noon, one and two, there was no phone call. I was gleeful! I was all like, Is this my Mother's Day present?

On the Saturday before Mother’s Day, Kendal had called me and asked if one of us could come and get him from San Antonio to bring him up here to our house in Austin.

“It’s only appropriate that I spend the day with you Mom,” he said rather matter-of-factly. Well, isn’t that sweet?

A good Mother’s Day to me means please give me a break from being your mother. Let someone else do all of the things and solve all of the problems. All I want is peace and quiet.

I am still decompressing from years and years of noise, meltdowns, fights, and explosions in my house. I have lived so many years being on alert, hyper-vigilant because anything could go wrong at any moment. I have PTSD from it.

So, when Kendal called me to help him figure out how to get to our house. I quickly redirected him to call his father. It’s Mother’s Day. Why should I have to figure out all of the logistics?

Facilitating communication between the boys and their father has always fallen in my lap, which turns into another source of stress for me. I'm not doing it anymore. I've become all about boundaries. In the past, I allowed way too much boundary crossing. As a result, I became depressed, anxious, down right angry and resentful of the people I love.
I sent a text message to all of the adult men in our family (my husband and 3 sons). “You guys figure out Mother’s day with your father. I’m not in it.”

Alan helped Kendal arrange to take the GreyHound bus from downtown San Antonio to downtown Austin. All phone calls from Kendal on that day were made directly to his father. His dad made sure that Kendal made it safely to the station and got on the right bus. He then met Kendal at the station here in downtown Austin.

It turned out to be one of the most peaceful Mother’s Days that I can remember. All three of the boys eventually made it home to see me. They didn’t spend all day and night. Kendal was the only one who sat down for dinner with me. The other boys had already eaten. I didn’t care about any of the formalities of the day.

My husband brought in Italian food. There were no big gifts or flowers. They all gave me beautiful, thoughtful cards, the gift of their presence, and peace.

I say all of this to tell you ...there is always hope. 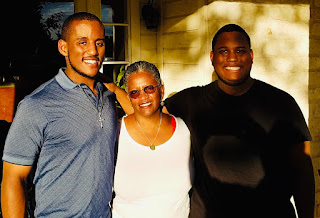 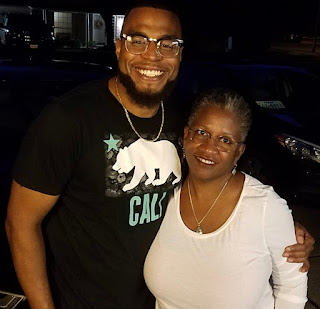