Look. I get it. Four years later —you’re sick of my son. He’s combative and
argumentative. He can be straight out rude when all you’re trying to do is help him.  He will argue with you the whole time that he's doing exactly what you're asking him to do, but it's still a time destroyer and a major energy drain.

Guess what?  Twenty-two-years-later, I’m sick of him too.

Don’t get me wrong. I am your biggest fan. I appreciate the work you have done with him. While he was no picnic, you have always had his best interests at heart. You have worked with him patiently, with love and kindness. You have carried him a long way from where he was at the age of 18 when he entered your program. A program by the way, that I thought he didn't need, but I let go of my ego and pride and did what was best for him.

We all know that behavior is communication. Okay, I’ll admit some of his behavior is just pure asshatery. What can I say? He’s a dude. He’s 22 and full of testosterone. He hasn’t had a real girlfriend yet (if you know what I mean...wink wink).

However, most of his behavior is based on autism, lack of filter, fear, anxiety, and self-loathing.  His fear is based on the unknowns of exactly what the next chapter of his life will look like. Most of his anger is because of mood dysregulation. Also, he doesn’t really like himself. He doesn't even fully appreciate the gorgeous body he has sculpted and developed through weight-lifting and a healthy diet. The kid dropped 100 pounds and he still focuses on his problem areas and why he's just not good enough. 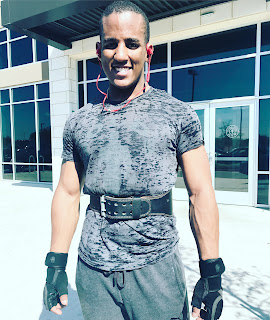 He is quite aware that he is different and has always been treated that way by many of his peers.  He has insecurities because things that are simple for others are quite difficult for him. He still deals with the trauma of his entire high-school experience.

I’m sure you know how much our experiences in middle and high school can affect us for the rest of our lives. I still remember the names they used to call me. I think I finally started to get over high- school in my forties. I finally realized exactly who I am, authentically. Screw those high-school bitches who were insecure and tried to make me feel the same.

The difference between us? I don’t have the option of being done with him. There is no option of giving up. My time with him doesn’t expire at the end of this school year. I have a lifetime commitment here.

I pray every day that eventually he will meet the wonderful open-hearted woman of MY dreams who will love him and put up with his shit for the rest of her life. But based on his behavior right now, that seems like a long shot. For now, it’s me. I am his person. He has his father, his brothers and a few good friends, but I am the bank in which he deposits of all of his worst crap.

So recently your team came up with this job option for him that I didn’t feel was workable. Frankly, there were red flags all over it. You’ll have to forgive me for speaking up and saying, “No that’s not going to work.” Actually, you don’t have to forgive me. That is my job. 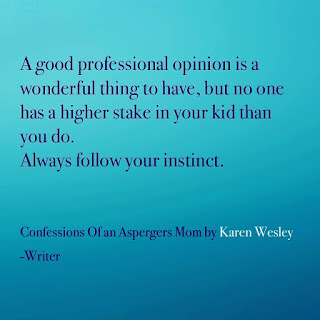 You see, I would be on the receiving in of the middle of the night phone calls when the shit hits the fan.  His father and me, we pay the legal bills, and the hospital bills when he falls apart and has a major meltdown.

According to what I read about this job and this particular moving company (Yes. I vetted them by doing my own research. Actually, my son did the same. Only he doesn't always make the best decisions and look at the whole picture. ) Money is his motivation. My motivation is his overall mental health. He has had friends who have worked for this company and they did not have anything pleasant thing to say about the experience.

Let's make a list of the red flags:
The job you helped him find may be great for some young fellow with zero skills and strong muscles, who is desperate to earn quick, (not so easy) cash while being taken advantage of by a moving company that needs cheap labor. My son is NOT that person.

There are so many things that need to be taken into consideration before we throw a boy with autism, ADHD and mood disorder, into the fire of a job that is a pure set up for failure. He has two part-time jobs currently. Is either of them the ideal situation? No.  Sometimes they change or cut back his hours. But for the most part, these two jobs are working for him so far. And mind you …he has those two jobs because I insisted that he fill his time constructively.

I would love to see him in full-time employment and have him live on his own, but he is showing me in more ways than one lately, that he is not ready for all of that. He will get there but he’s not there. It’s quite frustrating and disappointing for all of us.

I felt a subtle insinuation from our recent text messages and e-mail threads, that you and frankly other professionals, who work with him think that maybe I am too “overprotective.”

"We just need to let him feel the “natural consequences of his actions. Let's just see what happens." Sink or swim. Throw him into the deep water. He's a man after all!

Well, he gets plenty of natural consequences. Trust me. However, as his mother, I can not and will not throw him into a situation that is not healthy for him if I can help it. He has enough of that in his life already.

I mean do you think I want him living in a group home? Hell no! I don’t. But it was a boundary issue for us and an excruciatingly tough decision that had to be made, both for my mental health and his. The experience of living there has been a cross between hell and life on earth, but he is growing despite the less than ideal environment. The staff and their program at the group home really suck eggs. They don't get paid well and you can tell by the job they do.

Fortunately, he knows how to speak up for himself and he has his father and me to continually advocate for him. God always seems to put other positive resources into his life, like you have been to him over the past several years. I can’t be all things to him that he needs. It really does take a village to raise a difficult child.  I will continue to be as much to him as I humanly can, until the time that I leave this earth. And at this rate, it may be sooner than later.

Meanwhile, I will continue working to maintain boundaries with my son.  I will continue to protect and nurture myself, while always trying to do what is best for both of my young adult children.

Have I mentioned that I have another high-maintenance son with a whole additional set of transition issues going on at the same time? My life is a real recipe for nut soup.

Yes. I want him to work.  He thrives in a work environment more than any other place. Yes. I want him to be as independent as humanly possible and not just sit around taking handouts from the government because let’s face it, they suck too.

You’re going to have to trust that I know what’s best for him, despite the deadline for your services. Luckily for you …you get to say goodbye to him in May.  I can’t lie. I wish there was a deadline when I could say goodbye or at least farewell, see you next year. I'm still praying for that angel to come into his life and take over.

I am confident that together we will figure out a path to get my son through his last few months with you.  We will set him up for the additional services and resources that he will need to get himself through to the next phase of his adult life.

Again, thanks from the bottom of my heart for all that you have done and continue to do for young adults with special needs in our community. Some things in life, just take longer than the designated time that you have to give them.

By the way, I have still have my insecure moments when I think I am doing this all wrong.  But I know deep inside, I am one hell of a mother. I stand by all of my decisions, all of my actions and inactions, my protecting, advocating, my stepping up and stepping back, drawing boundaries and sometimes having them crossed.

I am doing the best that I can for a very difficult young man who will always be my child. A lot of mothers would have just walked away by now.  Don’t think there are not days when I want to run screaming. But I’m still here and will be when you’re gone.

p.s. You can tell from this post how much I like the word suck. :) Feeling a lot of suckiness lately.