Before all of this
all I could think was
how much I want to get out of here
I was starving for adventure to stir my soul
freedom, quiet, alone, thinking, dreaming, writing,
seeing, feeling,
something beautiful
preferably and ocean
anywhere, but here

Universe says
“Not so fast, missy. Slow your roll.
No, I mean seriously.
Slow it, like it has never been before.”
No intoxicating excursion for your birthday
Appreciate the journeys you have already taken
They play on a highlight reel in your mind
See the memories like a film
--a brilliant, permanent, imprint on your soul
The journey is in your mind
It is the best kind
Write it down on paper
touch it
let it carry you through the ache
while the memories sustain you

I wake up wistful
longing
same place, same thing
nothing happening
emptiness, gratitude
intertwined with profound sadness
not a lock-down
a slow down

Absence from the yoga studio
community, friendly smiles, humanity, energy
Appreciating I can breathe, freely
...not gasping for air in a cold, empty
hospital room -left alone,
to die like many
unprecedented times
tired but alive

Craving the ocean
content with the breeze
front porch, sitting
newly blossomed red oak trees
belong to me
A family
of Blue Jays
make my home theirs
Squirrels scurry everywhere
looking for harvest
in the tall, green grasses

Surrounded by family
yet lonely
loving these folk desperately
but wanting to leave
missing friends
wanting to miss this family
bored of their conversations
fatigued from negotiation
over dinner
Ah...
a sushi picnic for one
in my car
chartreuse coffee cup
fill her up
white wine
perfect
don't tell nobody
palate heightened by wasabi
sunroof open -breeze blowing
sun setting
filling empty journal pages
thoughts and words
voices muted by time and spaces
sexy silence curated

Posted by Karen Wesley Writes at 11:02 AM

Did you know that my son Kendal was born in Burbank, California?
I was raised in Los Angeles.  I can't tell you what a dumb idea it was for us to move to Texas, but we did. We have always gone home frequently to visit the friends and family we left behind. That was a good thing for Kendal because he developed close relationships with our extended family.

Well ...he's going back to Cali. In fact, as I write this he is already there. 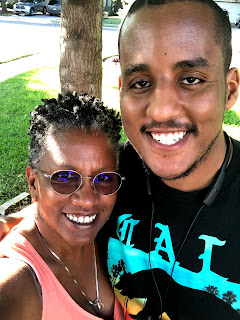 In my last couple of blog posts I told you all that we were working on relocating him from San Antonio. Our hope was to help him get an apartment closer to us in Austin.

Over the past few months, I did everything I could to try to help him with this transition. I went down to San Antonio, tried to connect him with agencies, looked at rooms for rent, and roommate situations. I brought him up here and took him for job interviews and to check out apartments.

As with most things when it comes to him, the process was extremely frustrating. He argues for something in one moment, and against it in the next. I understand that most of this is based on fear and anxiety, but it's still aggravating to deal with. After years of battles with him, I am fried. Burnt out --to a crisp.

He’s at this precarious place on the spectrum where he’s smart enough to know he wants the best possible life. He wants to do something grand. And yet, he's missing a few of the links on exactly how to get there.

I could be wrong, but I think he's in a self-imposed competition with his father, his brothers, and the rest of the world for what he perceives to be success. He fights an inner battle with the autism diagnosis. It makes him feel less than others. In fact, he has told me that I make him feel like there is something wrong with him. At this point, I am used to being blamed for everything.

I try to encourage him with the “different ability” speech and the “everyone has a unique gift to offer the world. Every job is important. There is no less than or better than. We are all just trying to contribute to society.” He buys into it for a while, and then he doesn’t.

He is an adult --free to make his own dumb life decisions (just like I did). Just like we all do. I can not protect him from his choices. Lord knows I have tried. Protecting your child from the world never works because it’s really not your job. It's their journey. Good, bad, and in-between. It makes them stronger.

Kendal has this entrepreneurial spirit. He doesn’t want to be the “average working guy with a job he doesn’t like for twenty or thirty years.” (A line I believe he heard on a motivational video on YouTube --the bane of existence). He has repeated this to me at every turn for the past two years.

We encourage him to take further steps in his independence and education. He fights back with the stance, “I don’t want to be average. I don't want some cookie-cutter program that everyone else follows."

Can you feel my eyes rolling?

He has never had a job he didn’t like. In fact, he has loved most of the jobs that he’s had. He has never been without work since leaving high school. He thrives on a routine, schedule, and known expectations.

At the same time, he wants more. He wants to “own his own business and have unlimited income,” whatever that means.  This is a dream that we as his parents could not get behind. At least not until he builds the very basic foundations of life.

How are you going to run a business when you have a hard time managing your own finances? When you have the opportunity to save, you spend, impulsively.

We are of the mindset that you need to have your bases covered, i.e. income for food, shelter, medication, transportation, and managing your own finances. Perhaps some education on how the world works, in general, might just be a good idea. He is intelligent and hard-working, but sometimes he can be naive and vulnerable.

I showed him examples of others in our family who are entrepreneurs.  My brother has had countless businesses over the years. He also always had a very well-paying job with benefits to cover his bases.

My niece is an independent Cinematographer.  She went to college, worked for free as an intern, built a portfolio, and got into film school.

My sister owned her own hair salon for years. She had formal training, a license, and built a clientele before she could open her own salon.

I spent five years as a Real Estate Agent. I also had a part-time job with a property management company to make sure that I could pay my rent, in case a deal didn't close or a buyer wandered off...

You can't skip the steps and go from zero to one hundred. First, you take steps one through ten, and so on, until you reach your goal.

I even tried to take myself out of the equation of figuring out his next steps. I hired a  Counselor to do Case Management to help him find an affordable place to live up here (near us) and a new place to work. She is a contact that I know because she used to work in our school district with teens and young adults.  I couldn't get the government agencies up here to work with him during Co-Vid. Most of them are barely operating.

He would not follow through with her.  He would only allow her to help him so much before there was push back.

To top things off Co-vid 19 happened. He had a job offer that was pulled back after the shut-down.

The bottom line is, I think there was a shitload of fear that got in the way of him moving forward. Maybe he just wasn't ready to live by himself, even with supports. Maybe the uphill battle that it would take to make that happen was not the path for either of us right now.

He told me straight out, he does not want to be controlled by us (his parents). If he got into a living situation that we helped support, he would feel obligated to do things "our way."

My niece offered for him to come and live with her in her home in Los Angeles and help him figure things out. She also has that entrepreneurial spirit, although she has an education, experience, and a foundation of homeownership to go along with it.

He believes that this is his chance to carve out his way in the world, without being obligated or controlled by his parents. I get that. And so...off he goes.

I am beyond tired of the fight to help him when he clearly fights against me at every turn.  No matter how much he asks for my help, every day ...like, ten times a day.

I can not say concretely, what his plan is once he gets there or if he will even stay.

Do I have fears? Absolutely. I won’t bore you with the long list. The first one starting with putting him on an airplane during Covid-19. Again, I can caution him and ask him to take the steps to mitigate his exposure. I can not fully protect him. I pray for his health and safety and then let it go.

When we took him to the airport thankfully, it was nearly empty. I pray that means that his contact with others was limited.

He has a place to live with a family member, who is not ME. My siblings and friends all live in California. He will have more of a support system than he did in San Antonio, with only his brother. If shit hits the fan, he has family there.

I personally offer no guarantees of help and have no plans of being involved in his day to day decisions. As his parents, our offer of support remains where we live, in Texas. I have no idea if this move will be permanent or not. With Covid-19 happening right now, the job market is crap.

He recently got involved in a network marketing business that has something to do with vitamins and weight loss. He has been drawn to the health and fitness world since he lost 100 pounds a few years ago.  He is determined to try these different “roads to wealth.” I hope he pleasantly surprises us. Maybe, he can buy me that house by the beach I’ve always wanted.

He will be on quarantine-shelter-in-place when he gets there. He will have a safe place to live until he figures things out.

My niece used to work as a Social Worker. She is raising my nephew who just turned 18 and is finishing high-school. She is a person who could get Kendal to eat green vegetables when he visited L.A. in the summers and on holidays while growing up.  I couldn’t get him to open his mouth to taste anything green. She is not me. He has always done better with anyone who is not me.

I was praying for a solution that did not involve him coming back home. God opened that door, and he walked through it.

I have given him my all for nearly 25 years.
I am thankful and hopeful for this next chapter in his life.
I’m going to crawl even further into the backseat now.
I think I may even take a nap. 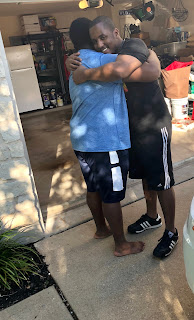 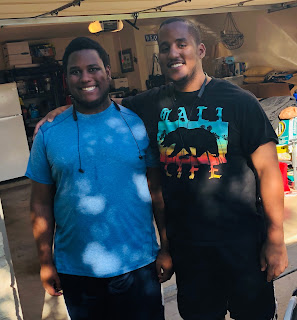