How much help is too much help from a parent when your child with autism becomes an adult?

First of all, the term “adult” is very broad. Reaching the age of eighteen or twenty-one makes them legally adults. However, for adults with Autism Spectrum Disorder, delays in development and maturity can be significantly slower than their typical peers.

According to a study by the National Center for Biotechnology Information, U.S. National Library of Medicine in November 2009:

“Because of delays in ongoing social development, some of these individuals may attain educational, independent living and relationship goals, but reach them a decade or more later than typical for the general population.”

In the journey with my sons, I found that too much help could be toxic (and I can be a real helicopter mom. I'm constantly working on it.) Too much help can delay them even further from becoming independent.

Think about it…
Why do things for myself if mom will do it for me?
Why do I need my own money if dad will give me everything that I want and need?
I will never forget the first time Kendal had to take money out of his own account, for his spending "wants." He was so angry with me!

Transitions in life are hard for most of us. The responsibilities that come with adulthood can be overwhelming. Working, going to college, deciding what to do with your life, budgeting money, planning how best to spend your time. The call for a social life that looks like what your peers seem to have can be especially difficult for those on the spectrum.

I have also seen examples where not enough help can leave them sitting in the same place for far too long. Once you fall too deeply into depression, it gets even more difficult. Then because they are legally adults, we can’t exactly make them conform to get mental health services.

Let’s face it, often we (parents) are the last people they want telling them what to do. In their heads, they are adults and should be able to make their own choices. I get that. In our experience, the help can not always come directly from me or their father. We need a whole community of supports to get us through the transition to adulthood. Ideas sound so much better coming from a respected peer, a mentor, a cool uncle, cousin or aunt.

There is the school of thought, “Let them choose their own path. Let the cards fall where they may. It’s their journey.” I fully support their path, their choices. However, in our house choosing to do nothing is just not an option on the menu. Doing nothing exacerbates depression and anxiety can be incapacitating. An idle mind has too much time to fixate on negative scenarios. Also, having nothing to do means more time to bug the shit out of Mom. I am already over my limit.

I’m not autistic and yet, I’m pretty good at talking myself out of things that seem daunting. I usually dread the worst outcome. This comes from my own anxiety, which has increased on my journey through motherhood. It doesn’t serve me to think the worst. I’m getting better at not doing this, but I am a work in progress.

I was more optimistic before I had children. Experiencing so many traumas with them (the diagnosis, meltdowns, the constant calls from school, interactions with mental health authorities). All of this changed me. Before kids, I was willing to try anything, to ask for any job, more money. The experience of raising these children, in particular, has changed me beyond the point of recognition.

For our boys, once they hit 18, the choice was either school, work, volunteering, or some combination of these. In Kendal’s case, I sometimes “voluntold” him because I  refused to allow him to be bored. Having nothing to do made his behavior intolerable.

Unfortunately, at the age of nineteen, we found ourselves making the decision to gently push Kendal out of the nest and into another living situation. I can barely say the words group home out loud. It just doesn’t sound like a place that a child of mine would ever be. I had put everything I had into raising him and getting him the proper supports and therapies, from the pre-school program for children with disabilities when he was three-years-old, to the school district’s Adult Transition program until he was twenty-two. Not to mention all of the therapies and camps we put him in over the years.

By the time he was 18, I was on the edge of a breakdown mentally. It felt like full access to me made his behavior worse, and his motivation to grow up, stagnate. Living in our home was disruptive and effected everyone, including his younger brother who was in his junior year of high school. Blue could not even do homework in our home without disruption and explosions.

However, Kendal being in a place that he did not love as much as home, motivated him. I think he felt more like an adult. He actually became a leader in that environment. Most of his roommates were not functioning as highly as he was. He was cooking, shopping, preparing his own meals. He had begun to work on weight loss and ended up losing over 100 pounds. He was motivated to acquire the adult living skills so that he could move to live semi-independently with his older brother.

I am proud of the steps these young men have taken towards adulthood, but none of it came without gentle pushes.

The most exciting news is that three weeks ago, we helped Blue buy his first car. He just reached his 21st birthday this month. He has been working and saving for over a year.

His driving journey started at age 16 when he took his first Driver’s Education class. He did well, passing at 95%. However, the whole ordeal caused him quite a bit of anxiety. The mere fact that the class was something additional added into his schedule between school and homework, was enough to throw him off. Nevertheless, he emerged with his driver’s permit.

There wasn’t a lot of driving practice afterward. Anxiety slowed his roll forward. Eventually, in his senior year, we got Vocational Rehab to pay for some behind the wheel lessons. We thought it was better that he drove with a professional instead of us (his parents). He was pretty oppositional and argumentative with us because after all, we “know nothing.” He was less agitated and more relaxed by driving with a professional. Both of the boys behave better when we are not around.

After his first year in college, I gently pushed Blue again to move forward with driving. He decided to take a refresher driving course. After the behind the wheel practice, he finally initiated taking and passing the test his adult license. Still, for various reasons, there was very little driving practice, though continued to save towards a car.

When word got out that Blue got his adult driver’s license, suddenly his older brother was motivated to take more lessons and obtain his license. To date, he’s still working on saving for a car.

Blue has mellowed out so much since he stopped classes at the community college and started working. Working made him feel successful. He is well-liked by his Managers and his peers. He even hangs out with some of his adult coworkers.

His demeanor has made it easier for us to ride with him for driving practice. At least now, he will listen. More so with his father than with me.

Now he’s driving himself to work and to his favorite spot to hang out and write —Starbucks. He has taken himself to the grocery store and Target and of course, out to eat.

We still drive him or ride with him if he has to go across town. There’s no highway driving yet. We are absolutely thrilled that we aren’t paying for Uber or driving him everywhere anymore.

His next goal is to possibly get an internship or apprenticeship so that he can increase his earning potential. Driving gives him more access to the world.

I am extremely proud!

Posted by Karen Wesley Writes at 9:53 AM 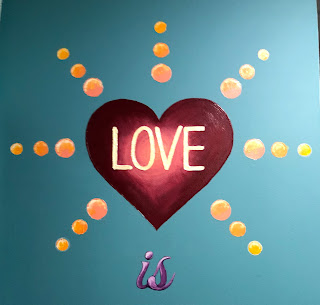 Sometimes love is blind
We convince ourselves that the person we think we love is perfect
Unable to recognize their flaws
Unable to see what is at stake
We are stubborn and ignore everyone’s warnings
Someone can tell you how things will never work out
How the person isn’t right for you
That it isn’t meant to be
Even if you concede and agree with that person
Love is a force
No matter what anyone says
You can’t let go of this person
It is not until the day comes
Whether it be rejection, betrayal, or revelation
When you’ve been led on long enough
You finally, wake up
You find out the hard way
It hurts like hell
You feel an emptiness inside
Believing love is not real anymore
That no one could ever desire you
But then
After overcoming this pain
And learning from your mistakes
You find that love is not just a heart-fluttering feeling
You realize that you must see someone for all of who they really are
Both the darkness and the light within
Become aware of everything
Understanding that they are not perfect
Despite their flaws and darkness
You choose to accept them
To embrace them
To cherish them
It is when you finally make this conscious choice
That we know true love

This was written by a self-aware, insightful, old soul, inside of a young man of 21 years. He hopes that this will help someone understand love a little more.