Over the past few weeks we have been dealing with some medication changes.  Emotions have been running high. Anger has been vast. We have experienced some ugly breakdowns  (parents) and witnessed meltdowns (19 year-old ). His body's chemistry has been going through some serious changes. I am so pissed off about that, I could choke a Psychiatrist or two right about now (but that's another post).

What is assholism you may ask? I’m going to get that word patented, by the way. Assholism is the choice to act like an asshole. It can be an addiction of sorts…where you just gravitate towards those assholish behaviors without any forethought. The individual could be addicted to the pay off they receive by choosing such behaviors. As in -I know that will really piss that person off. I bet this will make this person scream or cry. That will be funny.

It could just be, I’m feeling bad …and it will make me feel better if someone else is feeling as miserable as I am.  Perhaps it’s just, I’m a hormonal teenager and I think I know everything! Let me show you that you don’t!

Some may draw the conclusion that I’m trying to compare autism to assholism. That is not my intention. Assholism can happen to anyone. For instance, my 86 year-old father can act like an asshole especially, to people who care for him.  It’s one thing to be a cranky old man. It’s another thing to curse people out and call them insulting names that degrade or defile them.  That’s just uneccessary.

Side story: This man, my father, (his friends call him Hollywood) recently escaped from his 3rd locked skilled nursing facility, where he was supposed to be getting therapy so that he can walk after taking a fall. Note: He can not walk unassisted!

He didn’t like it there. He felt he wasn’t getting the care he deserved or wanted. He had cursed out several nurses and therapists, being a very uncooperative patient. Quite frankly, I believe that he just doesn’t want to die in one of those facilities.  He wants his freedom and wants to go out on his own terms.

So, he had someone help get him half-way dressed and into a wheelchair. He parked the wheelchair by the front doors and pretended to be asleep until an ambulance showed up and the doors opened. He rolled himself out, down the street and around the corner,caught the train and then a bus, to make it back home to his apartment, where he still -can not walk!  I have to say this about him, he may act out.  At the same time, he’s kind of a bad-ass to make it out of a locked facility and all the way across town without being able to walk.

I'm thinking of making a movie short about his life on the run as a senior citizen in a wheelchair.  (Some people make think it's wrong to say your senior citizen, father with dementia is acting like an asshole. To those people -I'm sorry.) Actually, not really.

We all know at least one person who acts like an asshole.  Some of our lives are full of them. Assholism can happen to anyone. It doesn’t discriminate.  It happens to most teenagers at some point during adolescence. It is heightened by puberty between the ages of 12-14.  Just because our kids are on the autism spectrum, does not mean they are immune to it. In fact, that may just mean that it is intensified times a thousand.

Last week, we witnessed what outwardly appeared to be a pretty horrible, autistic meltdown.  Our family room was pretty much turned upside down.  Our son was livid, primarily because he wanted something and could not have it in the exact moment he wanted it.

Granted, the fuse that lit his anger was no doubt shorter than usual due to his body chemistry being off.  But was it a meltdown or a horrible tantrum to get us to do what he wanted us to do? He seemed pretty out of control in the midst of it, screaming to the top of his lungs and throwing things.

However, in the aftermath -we noted that not one single item in his bedroom had been touched. Everything remained exactly where it was pre-meltdown.  It was only our things that had been displaced. We also noted how quickly he pulled it together so he could make it to work on time.

That’s one of those things that makes you go, ...Hmmm. How much control does he actually have?

I offer to cook you a meal and you give me attitude, "I don't want that!" When last week when I was out of town,  you ate the very same thing without complaint. Assholism. Make your own dinner. If you can control your attitude with your dad but not with me, that sounds like a choice.

When you walk around like everyone owes you something and yet you don't treat them respect -that'sassholism. It's a choice that will not win you any favors from me.

The other day I posted this meme on Facebook. 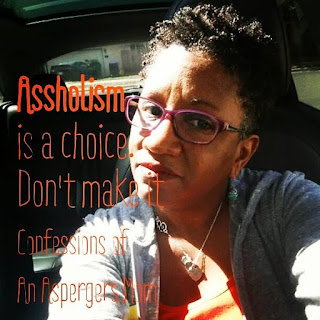 I made this one night as I sat in my room thinking, medication has nothing to do with assholism.  It's a bad habit.  You have to recognize it as such. Motivation to break a bad habit has to be internal. The individual has to be willing make a better choices.  Otherwise, you may find yourself up a creek without a paddle or a person to assist you down the creek.

Feel free to share this post with the assholes in your life. Together, we can change
the world.
~~~~~~~~

It’s been a while since I’ve been able to complete a blog post. When traumatic things are happening in my life my feelings are to raw to express without saying more than I probably should say publicly. I’ve always been a pretty open book on this blog, but as one of my boys is seriously staring some heavy issues in the face, I have mixed emotions about sharing his journey. Unfortunately, my journey is undeniably linked to his. As much as I would love for us to go our own separate ways. Well, that’s a whole other story.

I hope you enjoyed this bit of humor today.  Remember, if it's not offensive to someone, it probably not funny.

Thanks for following!
Posted by Karen Wesley Writes at 10:43 AM