When I wake up each morning, I try to have a game plan for my day. Giving my son a ride to campus twenty miles away was not a part of my plan. I told him I would not be involved in his daily transportation when he registered for these classes months ago. It's a daily piece of friction that neither of us needs.

After the week that I’ve had with him when he persisted, asking me more than once, and then he threw in the extra part about having a test today and not wanting to be late for it,  I agreed to take him. A decision I almost immediately regretted.

You know that feeling in your gut when you say yes when you mean really mean no? That feeling is getting bigger lately. My body is no longer giving me a pass on going against my gut. Every fiber of my being tells me, this is wrong. This is not serving you.  What’s more, it isn’t serving him on his journey to adulthood. Doing things for him that he should be doing for himself
is stunting his growth.

I found myself on the road this morning so angry with him and with myself. I could hardly see straight. This is definitely not healthy for either one of us. I dropped him off without speaking too many words (aloud). There was plenty of cursing inside my head.

I made it to yoga class but found my frustration hidden in the corners of every quiet space.

It wasn’t until I sat down to write at the library that I found a little relief. I texted my friend Rebecca (lovebecca.com) my very wise younger friend. She reminded me of something that my therapist has been working on with me for months. “Forgive yourself. Show yourself some grace."

I'm doing my best on any given day. Tomorrow I’ll do even better. One thing for sure is I can’t give up, or give in. Every single thing that happens on this journey is teaching me something. Total course correction is not going to happen overnight.

My "yes" today came behind what was already not a good week with him. There was an ugly meltdown with some serious implications. He had to leave the house and wasn’t allowed to return for the night. Luckily, we have a neighbor and friend who was gracious enough to allow him to spend the night in her home. Things are getting to the point where I know for sure, that he is going to need to live away from me sooner than later.

Unfortunately, it seems like our relationship is a trigger for him.  Hopefully living away from each other will help reduce these incidents. I just don’t know where he can go at this point. He will not qualify for some of the same programs we used for his brother.

Autism meltdowns are ugly. Autism combined with a mood disorder can be a nightmare. Blue is nineteen.  Some of the behaviors that occur during a meltdown could get a person into legal problems if they occur in an uncontrolled environment.

Where is the line? What is he in control of? What can we do to stress to him, this behavior could cause you big problems? He is a male. He is black. If law enforcement gets involved in any way, will they have the proper training to realize that this is a neurological and mental health issue? We’ve been there before. I don’t trust law enforcement.

If you’re lucky, you end up in the hospital and not in jail. Will the hospital really help you? Or will they try some new med that makes matters worse?  It's a coin toss. Who wants to toss their kid into a mental health ward?

Both boys seem to see me as an extension of themselves ...like I’m either the other half of their brain, their legs, or their arms or one of their feet. They don’t believe they can operate without me. If something goes wrong in their lives,  surely it must be because I’m not doing my part.

Kendal doesn’t live at home but in this transition to living with his older brother, he reaches back to me more and more, obsessively, compulsively.

As Blue goes through his transition, it feels like he didn’t get the memo that my role in his life has changed. He is an adult who is primarily responsible for himself. He still has this natural inclination to call on me to do things that I did for him as a child and yet he wants the autonomy of being an adult.

At least once a week he says to me, “Why is everything about responsibility with you?”

My question is, “Why isn’t anything about responsibility with you?”

The mental energy that I spend just trying to maintain boundaries is exhausting.  The more I draw the line for my time and availability, the harder they push the boundary with phone calls, text messages, and requests.  If I give them an inch, they run me over with a truck.

It makes me want to run and hide. When they were younger, I would hide in the bathroom, just to center myself. I would play on my phone, read a blog or chat with some of my autism mama friends who understand and make me feel less alone ...less crazy.

Today it feels like I need much more than a bathroom between us. I need my own apartment, without a forwarding address, and a new unlisted telephone number.  Either that or the last adult child in the house needs his own place.

There are too many questions and not enough answers. Add on my irrational, sometimes incapacitating anxiety and forward movement feels next to impossible. There is no choice but to keep it moving.

As always, I am always a work of art ...in progress. 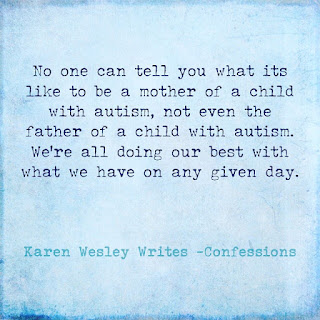 Posted by Karen Wesley Writes at 11:32 AM