Earlier this week, my father passed away. I've been trying to prepare myself for his death for the past couple of years. But are we ever really prepared? He was 86 years old, diabetic, stubborn and was also recently diagnosed with cancer.

I use the term stubborn because even though his health has not been the best, he refused to listen to doctors, health-care providers and his children.  He has been in and out of the hospital dozens of times, recently. Sometimes, he would refuse to stay in the hospital and would check himself out against doctor's orders. Other times, he would refuse to leave the hospital, when they said he was stable enough to go home or they recommended a skilled nursing environment.

He lived life on his own terms, despite the challenges that he faced.  I can't be mad at him. It was his life to live however he saw fit. If you follow me on Facebook, you may have read some of the crazy stories that I've written about him over the past few years.

His friends called him Hollywood. Even though he was born a poor boy in Arkansas, and raised in St. Louis, Missouri, his personality was larger than life in any of those towns.  He went on to make himself a success in the Hotel industry. 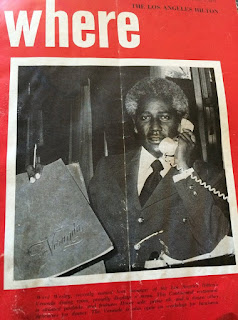 I am still in the midst of processing my feelings over his passing. I am trying my best to hold on to the good memories ...and there were many. I'm sure I will write more about him later.

Today, I thought I would share some thoughts from my son Blue about his feelings over his grandfather's passing.  He wrote this as a Facebook status a few days ago. He is allowing me to share it again here. Let's go inside the mind of a pretty special teenager with Aspergers...

"My grandfather has passed away as of Tuesday morning. (January 19, 2016).  For the past two days I've tried figuring out what I wanted to say and now I know what to say. I never formed a huge bond with him. I only saw him once every year. I could never feel as much pain as my mother or all of her siblings are feeling.

I last saw him this past summer and to be honest, it was probably one of the best times I had with him. I wish I could have talked to him one more time before he passed.

Although this tragic event has transpired, I was already experiencing stress for the past few weeks, with me getting back to school, starting Drivers Education, a scandal with one of my teachers, and me not getting along with my father. I changed my medication this past November and I have slowly been changing. I am more self-aware, more agitated and more stressed out. The good news is, I am also not gaining weight anymore.

With so many things transpiring one after another, I have fallen behind in my school work and I am less focused on my daily tasks. Now, my grandfather has passed. What am I gonna do?

With everything going on I am becoming closer to everyone in my life, friends, family and even people at school. That's all I care about now, not thinking of myself as much but being there for everyone. I know that would make my grandfather proud.  I will eventually get past all of this stress because every situation is temporary. I just want  my family and friends to know that I love and care about all of you. You all mean a lot to me. For all of the bad things I have caused any single one of you, I am sorry for all of that.  I will make it better from now on.

Thank every one of you for being in my life and I promise me being in y'alls life will definitely worth it."

As my niece Erin G. Wesley said today, "Loving you eternally and hope you're causing pandemonium in the afterlife. Onward."