The World is Full of A**holes

This morning's meltdown was brought to you by...bullying at school yesterday and not enough sleep!

I have noticed lately that Blue is actually getting up much better in the mornings for school.  Meltdowns have dissipated.  Anger is minimal.  Tardiness is just about non-existent.  In fact, he has been doing a better job of getting up and getting moving in the mornings than his older, 18 year-old brother.  This was not always the case.  There have been times where Red was the one winning at this battle.

Imagine my surprise this morning when I was met with an angry yell from behind a closed door. "MOM! MOM! Why did you wake me up so late?!"

I didn't even answer him.  I refused to talk to my children from behind closed door.  You want to talk to me? Open the door and walk yourself in here to see me.  He continued yelling.  In order not to disturb my mother and my husband who were still sleeping, I called his cell phone from mine and said, "I will not be yelled at from behind a closed door."

"What!? I'm going to be late!  This is all your fault!" And on and on and on.  When he paused for a breath I replied calmly, "You're wasting additional time by laying there ranting instead of getting up and getting ready. If you were 5 minutes late getting up, you are now turning it into 10 or 15 minutes by arguing."

I've told them both zillions of times that it is not my responsibility to get them up.  I am more of an insurance policy to make sure that they do.  I know ...I shouldn't even be that!  But I'm dealing in the reality of my situation.  They both have a hard time transitioning from sleep to awake.  This battle isn't new.  There are periods of time, when they are successful.  It really depends on what's going on with their bodies, medication, how they are actually sleeping, and quite frankly, how they are feeling about school at the moment.

I hope to win the war someday.  Key word here is HOPE! If you've been following our journey for a while, you know that nothing in our world is simple, as simple as solutions may appear to be.  I'm not new at this.  This is just one of our unfortunate truths.

So it turns out that he was indeed not late for school.  He had time to eat breakfast and get to school on time.  He told me at the breakfast table, that he really just wasn't motivated to get to school --a place where he is tortured everyday.
"I mean some days are good, but yesterday I was bullied by that same kid.  So I am not looking forward to today."
Ah hah! Lightbulb!

This kid is someone with behavior issues.  He seems to get a big kick out of pushing people's buttons.  He has been suspended, sent to the alternative school, he is in a behavior program now, etc.  The boy's behavior is just atrocious.  He is basically behaves like an asshole.  I've talked to Blue about this numerous times.  His teacher has addressed the issue.  We are working to get Blue to see that this is not about him.  It's about the kid getting a kick out of being an asshole and pushing his buttons.  The more of a reaction he gives the kid, the happier the kid is.

Blue is not that kid who will scurry away from the bully.  He will stand up and curse the kid out.  He has no fear.  He gets angry.  That anger may transfer into behavior at home.  We are working on that through therapy and with his social skills teacher. 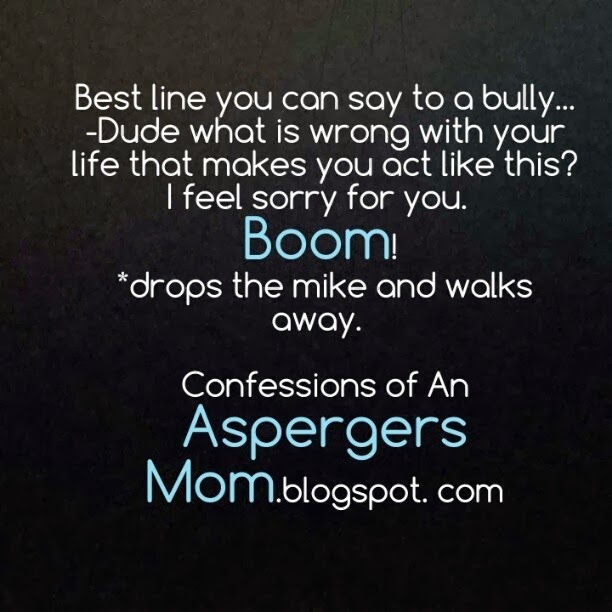 I could try to completely shelter him from the problem ...switch the classes around, push harder to get the kid kicked out or disciplined harder.  I could pull Blue out of the high school and put him in a charter school or home school.  But the truth is, in high school and in the world, there is always going to be some asshole who can't keep his mouth shut.  I want Blue to hopefully learn how to filter other people's behavior.  I am hoping to get him to see that it's not about him.  The problem is indeed something that is going on with the other child.  His bullying behavior is mostly all mouth.  There is something going on in this kid's life to drive his behavior in this direction.  In other words, I am asking for a bit of tolerance from Blue.  That may not be practical, but the truth is, the world is full of assholes.  We can't put them all in a black hole somewhere, as much as we would like to.

On the way to school I also discovered that, he had been up part of the night because of a stomach ache.  I am thankful that he didn't wake me up.  He just dealt with it.  So there's that.  But lack of sleep would help explain the extreme grumpiness.

The interesting thing is, on Friday I am leaving town.  My flight is early in the morning.  I didn't tell him yet, that he will be completely responsible for getting himself up and out the door that morning.  I have to tell him this at the right moment.  My mother will be there to help, but she is not me, and she does not drive.  He will have to be ready for our neighbor to pick him up.  I pray that he gets enough sleep that night.

I am sure that without me around, he will rise to the occasion.

Posted by Karen Wesley Writes at 9:11 AM