I am excited to bring you today's post, written by Molly, one of our Confessions autism mamas.  She is the mother to a 4th grade boy with Aspergers.  He was diagnosed near the end of 2nd grade.  This is their story of learning to play team sports. 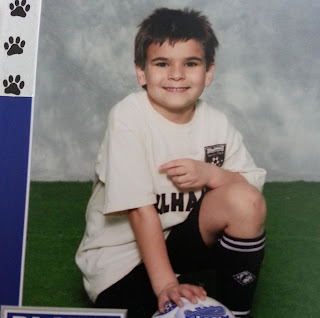 Where we live there are many sports opportunities and we have tried many of them.  You don't know if you're going to like it if you don't give it a try, right?  Most seasons are just a few weeks long for the young ones so you haven't lost much if you don't enjoy the sport you picked.  One of the first things we tried was soccer.  For the preschoolers it is parent/child together skill building with a few scrimmages.  This went OK for us as all the preschoolers were just as clueless and uncoordinated.

A couple years later we got to team soccer where each week we had a practice and a game.  He wanted to go to soccer each week, but wasn't really "into it."  Practices were fine because there were many adults working in small groups with the kids.  There was always someone available to give a reminder or take the time to practice a skill with the kids. So many of the kids were simply not that   good at the sport yet either.

At the games my son would often be unsure where he was supposed to go next. He would look to the coaches for suggestions.   Looking back he responded better when people would show him rather than give verbal instruction.  He would play his part of a quarter a couple of times and then be "just done" with the game for the day.   He was assessed and diagnosed just after the soccer season ended that year.

After diagnosis, of course I did alot of  research.  One thing I learned was that kids with Aspergers just don't play team sports well.  That was fine for other kids, but mine wanted to play team sports.  I was determined to find a way to make this successful for him. 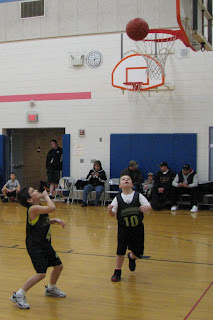 The following year he decided to try basketball. Unfortunately basketball is a fast-paced game and my son is a slow processor.    Most boys from our school played in a different league; we didn't know many families on this team and they didn't know us.  I went to the coaches before the season began to ask how we could work together to help my son play basketball.  Imagine my surprise & delight to find out that one coach was a SpEd Phy Ed teacher and the other was an Autism Specialist!  Together we made accomodations to the game that both allowed my son to be successful and allowed the rest of the  boys to have a good season.

Books
We went to the library to find books about basketball.  When we got to practice, my son had an idea about the game and the vocabulary of the game.

Simplify Positions
The league encouraged every kid to try every position.  This was simply too much processing for my son.   We settled on teaching him just 1-2 positions to play for each game.   He knew he could expect to be in one spot when the team was on offense and another spot when on defense.    This is also realistic of team sports as kids get older - players are often guards or forwards but not both.

Adapting Plays
Our coaches were teaching the boys to run plays in their games.  They made sure that my son's role in each play was about the same.   Not very effective at outsmarting the opposing team, but it helped my son successfully execute his part in the play.

Breaks
This league was a no substitution league - the purpose was for every player to get an equal amount of playing time.   Each player was to play a full quarter at a time - way too much for my son.   He would play a few minutes at a time before he needed a break.   The coaches & I learned to read the signs that a break was needed.  Everyone wanted to give him as much playing time as he could handle.  He would start the quarter, play a few minutes, take a break, then finish the quarter.  Before each game we would talk to the officials to explain the situation.   They were always flexible and allowed us to make these substitutions.

Visual Cues
One thing we know about kids with Aspergers is that visual cues are a huge help.  But how to make visual cues for basketball?   The coaches, my son & I worked together to create hand gestures to signal actions.  We also brought along a small white board to write or draw cues for the game.   There was a spot on the court that looked like  a block.   If my son was to go to that spot, we would pat our heads - block heads.   When he was to go to the "elbow" on the court we would touch our elbows.   When calling plays we would write a symbol for the play on the white board and hold it up.    When the messages were received my son would flash a thumb up.

We also used hand gestures to gauge his need for a break.   He could flash us a thumb up, down or in the middle to let us know how soon he would need a break.   Both the coaches and officials had a clear-cut way to know when a substitution would be needed.

Teammates
We couldn't have asked for a better team.  The boys learned to be tolerant and helpful to my sons struggles.   The parents were supportive of the accommodations made.   We never did a big lesson in Autism awareness, but let the boys know a bit about why we were having my son do certain things in practices or games.   Of course the boys knew my son was different.

Near the end of the season things began to "click" for my son.  During one game my son knew exactly what to do.  He went to his spot and got ready for someone to pass the ball to him.  The ball came his way.  He turned, dribbled and took a shot!     I was stunned to look over in the stands to find every parent on our team cheering for my son.  Some were so proud of him that they had tears in their eyes.  The game was delayed a few seconds while his teammates congratulated him.

We finished out the season feeling successful at team sports, proving to ourselves that kids with Aspergers CAN do anything with the right support.
Posted by Karen Wesley Writes at 9:21 AM