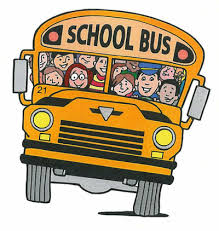 Editorial Note: This post was originally published in October of 2010.  Red was in his first year of high-school at the time.  I republish it today to demonstrate how much times have changed.  He is now attending his home campus high-school.  And has another bus driver and assistant.

Now when he first started with this driver last year...she seemed to be a bit of a grump.  She was very impatient and would hardly speak when he got on the bus.  She would take off as soon as he got on, and wouldn't even look in my direction as I waved good-bye.  She was actually so bad that some of our neighbor's boys who also have autism, would no longer ride with her.  "She's mean!" they would say, because she was so abrupt and rude. These are two boys are some of the sweetest boys I know.

Over the past year or so ...something happened and she has mellowed.  She bought Red and his friend these mini-speakers for their IPods for Christmas.  Then one day after Red and his friend had a difficult day, I saw her get out of her seat and hug my boy.  And then they bowed their heads and prayed.  It brought tears to my eyes.

Since then, I have seen her reading a scripture to the boys before they took off from in front of the house.  This from the woman who used to take off before he could barely sit down! Another day, when he had not ridden for a few days, because of difficulties at school, she actually got out of her seat, off the bus and met him in the driveway with a great big ol' hug.  I think it's safe to say ...something has happened.  They have bonded and made quite a connection.

Now yesterday, she actually walked all the way up to the front door! She was almost dancing with happiness to see him. The woman seemed so happy, I thought to myself, I want some of what she's taking! She was almost too happy! Red had missed riding the day before. I opened the door and thanked her for being so nice to him.  She said, "We love all of the kids who ride with us...but this boy is so special!"

O.k. now the bus driver is walking all the way up to the door. She would have come on in if I invited her. She really loves my boy! #ALittleLooneyIThink

One of my fans was actually offended by this.  So I replied to her...

"If it makes you feel any better ...I am MORE than a little looney!"

Here is what I wrote two years ago about Red and his Drunk Drivers...

"I don't want to ride with those Drunk Drivers!" That is the phrase of the month for Red, my 15 year-old son. I think he loves the way it rolls off his tongue, the melodic sound of it -drrrunk drrivers.  He must love it because he makes a point of saying everyday, several times a day.  It's one the many things that he does that drives me nuts.  There has to be something inside him that compels him to repeat things so often. I've read that people with autism do something called "scripting".  They get some sense of comfort from repeating certain phrases or words.  It's often something they've heard on a favorite movie or television show.

We made this deal.  If he is ready on time, I take him to school and pick him up.  If he is not ready that morning on time, he will not have the privilege of riding in my car (torturing me with your meaningless conversation about all of the things you want me to buy for you) on the way home.  Instead -he has to ride the bus home with those "drrunk drrivers!"

This was one of those, "I'm just too tired!" days.  He takes a half an hour to get out of bed.  To top it off, this time he actually came down the stairs, not dressed and laid on the floor in front of the refrigerator -I believe for the effect of pushing my buttons.  I don't say a word.  I just step on him on my way across the kitchen.
"Oops! Didn't expect their to be a body on the kitchen floor.  Sorry."

When we pull up to the school he never gets straight out of the car.  I can have five cars pull in behind me, kids get out and are going through the front door and he is still sitting there.  That's when he decides to strike up a conversation about what he wants to buy, what he wants me to buy, why he needs it so badly, why I don't seem to understand why he needs it so badly.  Or he goes into a rant about why I'm so mean -or why I don't care about his feelings.

If I'm so mean, why are you riding in my car instead of on the school bus?  Why am I not in bed, or at the gym instead of sitting here listening to you?

Sometimes, I just get out of the car myself.  I start walking my dog Harry, so that Red no longer has an audience for his rant.

Since he sat in la la land at the breakfast table after he finished eating, then took 15 minutes to go upstairs and put his shoes on, and would not get out of the car once we got to school -he had the privilege of riding with the drunk drivers home from school today.

Wonder if he'll be on time tomorrow?

P.S. Red is now 17 and in the 11th grade.  Most mornings he gets up on his own, makes his lunch and is ready on time for the bus.  I would say he does this 95% of the time.  That is a big improvement.  So for those of you fighting the morning routine with your autism kiddos...I want you to know there is hope!
Posted by Karen Wesley Writes at 8:21 AM