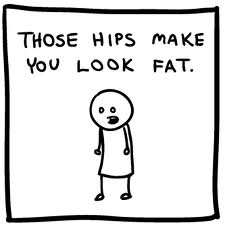 Red is on a quest to loose weight and be healthy.  In fact, it's his new fixation.  This is a good thing...a wonderful thing, except for the fact that he talks about more than actually doing it.
Here's the repetitive dialog:

"I really need to work out everyday.  Do you think I should join the wrestling team or should I play football?"  (There is really no intention to do either.)
"I can't eat any more cheeseburgers or fast food."
"You really need to take me to the Y.  Walking isn't going to do any good.  I need to run,  but I can't do it at that track around the corner.  I don't like to exercise in this neighborhood.  I don't like to exercise outside.  I'd rather exercise indoors...like at a gym."
"I need to eat more fruits and vegetables, but I just hate the way they taste.  What is that disgusting juice that comes out of the vegetables anyway?"
"Do you think I can get a six pack.  Well...I actually have a six pack...it's just hidden under here," he says holding on to his belly.

This is repeated over and over again about nine million times per day...and this is just a sample.

A few days pass where I don't have the time or the energy to take him to the gym.  He finally breaks down and starts playing the Wii fit.  He gets on and the game takes you through a fitness assessment.  They measure your balance, weight and BMI.  First the game tells you that you're overweight.  Nice! Then a little avatar of your body comes up on the screen.  It shows an overweight guy with a rather large torso area.

Screaming insults are exchanged.  Threats of bodily harm ensue.  I have to scream just to be heard to get their attention.  I then physically remove Blue from the room to tell him a few things about himself.

"You are being rude and mean to your brother."
"No I'm not.  I'm trying to help him.  What I am saying is a fact.  He is fat."
"Not too long ago...you told me someone at school said that you were chubby.  If I remember correctly, that really hurt your feelings didn't it?"  He thinks about it but doesn't respond.
"Everyone in this house could stand to loose a few pounds.  Your dad is overweight, but we don't walk around talking about it and pointing it out to him.  Don't you think that would hurt his feelings if we did?"  He gives me a sigh.  Like...o.k. I get it.

I know for a fact that he understands this concept.  I have heard him talking with his friends about a girl that rides their bus.  She is non-verbal and I guess in some way, not attractive...different.  He says to them, "She can't help the way she looks.  She has a disability.  We should be nice to her.  We don't want to make her feel bad."  Now the friends he is talking to also have autism.  It is not their intention to be mean.  They just don't have that automatic "self-edit" button that most people do.  They say exactly what is on their minds when they see something that makes them feel uncomfortable.  When most of us feel uncomfortable in some way, but we may think certain things that we wouldn't say ...out lout anyway.  This is a skill that has to be taught to these guys.  And they may have to be taught over and over again.

I can only hope that someday it will actually click!
Posted by Karen Wesley Writes at 8:31 AM