Red comes down the stairs with a scowl on his face.  He grits his teeth and starts being ugly to everyone.  I'm cooking dinner.  Asian meatballs, baked potatoes, and smothered cabbage.  I have no wine...I'm trying not to drink vodka martinis during the week.  There's a bottle of champagne in the fridge.  I have to make due with a glass of that.

I'm cooking dinner and he says there's no food.  The refrigerator is full.  Of course, he is welcome to cook whatever he would like if he doesn't want what I'm cooking.

Next he starts in on his brother just saying random shit that makes no sense...being mean.

I implore Blue to not feed into it.

"He's just being ugly to you because he's in a bad mood.  He feels bad, so he wants you to feel bad," I tell Blue.

"I'm not really mad at you Blue.  It's just that my life is horrible! I hate my life so that's why I'm being mean to you."

Isn't that true of most people in the world? They are mean and ugly to people because of some pain or hurt they are feeling...because someone else hurt them in some way.  Only Red really doesn't have this awful life that he complains about.  He has two parents who love him and take care of him everyday.  I would say he doesn't want for anything...but he does.  He wants for everything even though he has so much. Still in his eyes -his life is horrible, or at least he loves saying that to us on a daily basis.

His father just went out and bought him a new game last week.  He said he was "buying some peace."  It's a flight simulator game.  It did buy us peace for a couple of days.  It kept him occupied so that he wouldn't focus on the negatives in his life.

For a few days it was, "The best game I've ever played!"

Soon that turned into, "I Need HELP!"  (Because he doesn't want to read the directions.)

Then we move on to, "I need to download such and such to make this game LOOK better!" We don't have the basic functions of the game down, but we need to add something to it!?

In the middle of dad working on a contract or a conference call in his home office he interrupts, "Daaaad! I need these add ons!"

Or when dad comes in from a long day and he's trying to relax for a moment, "I need you to help me NOW!"

So much for peace.  When I see that dad is fuming -I check him on that.  "You are not showing appreciation for what your father has done for you. He didn't have to go out and buy you that game.  And here you are just days later finding a way to complain about it. Do you think maybe that makes him sorry that he bought it?  Do you think that makes him want to help you or buy things for you in the future? Hmm...he had to think about that one!

It pains me that he is so miserable that he has to try to make those of us who love him feel his pain constantly.   I feel bad for him, but sometimes it's such a downer to be around the constant negativity.  I really feel sorry for his little brother who can't tune him out very easily.  It's hard to stay positive especially when it seems like the more you try to do for him, the more he complains.  He's like a bottomless pit --a black hole.

I get that he has yet to develop many friendships, especially at school.  He talks everyday about wanting a girlfriend.  He says he wants a group of friends to hang out with, but he hasn't been able to make that happen.  I'd be happy if he had just one or two positive friends who love and accept him for the way he is.  I pray that in due time, that will happen for him. 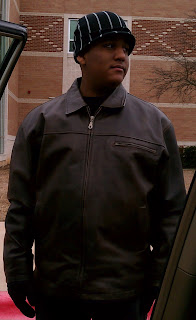 In the mean time we love and support him the best way we can.  Even though most of the time, he is NO fun to be around.  There is so much love and positive energy in this family, but he can enter a room and just suck the life right out of it.


-I took this picture of Red on one of those mornings when I was dropping him off for school.  I got him out of the car by telling him how handsome he looks in the leather jacket handed down from his uncle to his dad, and now to him.  He is handsome just like all of the men in our family.  "No I'm not.  I'm ugly! That's why I don't have a girlfriend!" No my dear...being ugly is not the problem.  Acting ugly...??? Fortunately, that is something you can change.

Posted by Karen Wesley Writes at 9:21 AM