I was battling and fighting with everyone in my dreams last night.  I had to wake myself up because I was so tired of fighting.  Right now I can't remember who all I was fighting with.  By fighting I mean arguing mostly. 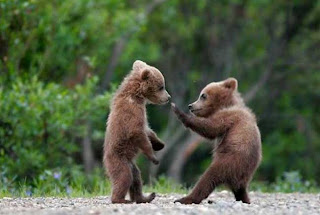 I went to bed last night in a bit of a mood for that very reason.  I'm just so tired of the fight -the fights between brothers over anything and everything, the fights between father and one son or another.  Fighting to get them to behave.  I am the official referee when they are all fighting.

Last night my mother weighed in on the fight -the constant battles in our house.  I had taken her out for dinner and cocktails an in her inebriated, relaxed state, she felt free to give me her unsolicited opinion.  We had just gone to a movie.  I would have preferred to talk about that instead of how I raise my children.  I was feeling rather relaxed myself by the martini I was drinking.  She instantly killed my buzz.

Red -who had reached his goal of getting what he wanted, only to find out that it isn't what he thought it would be, thus -he is not happy.  Thus -he is being ungrateful and already asking for something else.  Thus -Dad is totally done with him.  Thus -he is being a pain in ass to everyone in the house.

When I come home -buzz already killed, Red pounces on me verbally about what else -why what he has isn't working the way he thinks it should and why he needs something else to make it better.  "I can not help you with that," I say and then retreat to my room.

Blue accompanies me.  We lock the door behind us.  We want to close out the rest of the world for a while. We watch a couple of family comedies on the DVR, "The Middle" and "Modern Family".  He gets it. We laugh together.  He says to me, "I'm glad that made you feel better Mom." I thank him for hanging with me and for caring about my feelings.

This morning I play possum, pretending to be asleep when Red enters my room, uninvited, and stands over me and says, "Good Morning Mom".

It's Sunday.  I want a peaceful day, I'm am not ready for another day of the fight.
Posted by Karen Wesley Writes at 5:55 AM