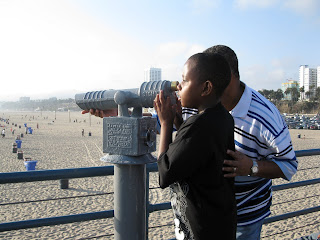 He replied, "I feel like my brain wants to be left alone." He went on to explain that he still feels achy and his eyes hurt.
His regular doctor is a very tall, handsome, well dressed guy, a fellow democrat I found out when I took my "Dreams of my Father" by Barack Obama into his office one day.  He's an extra 15 minutes away, but I've stuck with him partially because he's a really good, understanding and informative doctor and partially because he's really good to look at. Well he was all booked up, so I took him in to the more local clinic to see another pediatrician who's schedule was wide open. So he runs a lab to find out that he does indeed have strain A of the flu. Then he's like "Well, I could subscribe Tamiflu.  It could cut the illness by 24 or 48 hours, but it may not. A lot of people complain about it bothering their stomach and then they stop taking it.  Also, it's kind of expensive."  I'm like -well could you be anymore on the fence about it? I mean your just so definitive.  I really know what to do based on your recommendation. Geez!  I go on to ask him about the flu shots and the swine flu coming this fall and winter.  He's like, "Yeah you can get the shot.  He may or may not still get the flu. We're not really sure if the vaccine will cover the strain that's coming." I'm like, Wow! If feel so reassured!
I left there a little pissed at the whole situation.  I confess -when I got home I called the school nurse and told her that Cole definitely has the flu.  I also told her that in hindsight -I was disturbed the other day when I was sitting in the cafeteria watching the teachers instruct the students to take their dirty trays and pass them down the center of the table. These are trays, that they have all touched with their hands and put their hands in their mouths to eat.! Gross! I don't think that is the best way to pick up the dirty trays.  Someone should be wearing latex gloves as they pick them up,  and then wash their hands afterward! No wonder he has the freakin flu a week after school started!
I have to admit -this was one of those days when I feel blessed to be at home to take care of my sick child, to take him to the doctor.  On this day, I am happy that I don't have a job to feel guilty about calling in to because I have something more important to do.
Posted by Karen Wesley Writes at 9:04 AM