His Future is Bright 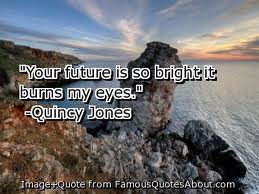 "God doesn't give you more than you can handle."
"There is a reason why God made you their mom."
I can't tell you how many times I've heard these sentiments from friends and family.
Well, I often ask God,
"Really??? You think I can handle this!? Come on now! You can't be serious."

I write most often about Red.  He has always been a complete puzzle...a real piece of work since he was a baby.  He showed up to the party early...an emergency C-section.  He was the baby who cried and cried every evening for hours on end.  He screamed every time the car stopped.  One time my husband had to pull over into a Mc Donald's parking lot and walk with him until he calmed down.  He said, "People were looking at me like I had kidnapped him or something."  Even though, they couldn't look any more alike.

Red was hospitalized @ 17 months with Kawasaki's Disease.  This strange high fever came over him for days while we tried to figure out what the hell was going on.  Finally the 3rd day, he woke up swollen all over, eyes, lips, face, fingers.  I rushed straight to the Pediatrician's office where they sent me directly to the hospital and he was admitted.

He was speech delayed, with his own garbled language.  As his mother, I knew something was off, but the Pediatrician dismissed my feelings.  Finally, at age 3 after having his hearing tested by an Audiologist...I had him tested and put into Speech Therapy and Pre-school for Children with Disabilities.  In 1st grade we got the ADHD diagnosis, which did not fully describe him.  In 4th grade he was pretty severely depressed and finally in 6th grade we figured it out!  He has Aspergers!  A huge light-bulb moment!  It explained so much!

As he storms through the teen years, we have also been given a mood-disorder diagnosis, subsequent to  Aspergers.  In other words, his depression and rages come as a result of his Aspergers.  He can really lose control when he's in his worst depressed state of mind.  When you're 5' 10 and 200 pounds,  the meltdowns are not so cute!  In fact, they look pretty darn scary.  Therefore he takes medication to keep those rages under raps.  I am hopeful that as he matures, and his hormones balance out...he will be able to control his moods a little better.  Key word here is "Hopeful."

If you've read my blog, you know that Red is hell on wheels!  He is a real-hand full to say the least. Therefore, he requires a great deal of my time and attention.

I started out writing this post not about him.  It's about my "Easy" child.  My Angel... Little Boy Blue.  Who since adolescence began is no longer such an Angel, and is definitely not little!   I think I've scared some of my readers of younger children with my exploits with Red.  Every child with Aspergers is different.  This includes Red's brother...my youngest son, Blue.

Blue was diagnosed with Aspergers shortly after we discovered Red's diagnosis.  There were eery similarities between them, although, they are very different!  Blue's Aspergers is very much anxiety based.  He also misreads social cues, and has very rigid, black and white thinking.  He is however, an excellent student, a very-hard worker and wants to be perfect at EVERYTHING!  He wants to be a good son.  He wants to please his parents and teachers, whereas Red couldn't care less.   At least all of this was true until recently.

Puberty hits...hormones kick in and now...watch out world!  I have hell on wheels number 2! Still he is not like his brother.  He has a number of friends, most of whom are on the spectrum or have ADHD.  He is still an excellent student with an A average.  He is a leader and an a compassionate friend.  In fact, in some ways he is very typical.  He would definitely rather be around his friends and their families than be around us.  Yesterday, I took him and his friends to the mall and they pretended not to know me. That was pretty funny and kind of cool at the same time.

As the hormones kick in...I no longer know anything!  He knows everything.  When the anxiety and fatigue kick in...I am the ball he kicks around in frustration.  When the meltdowns come...everything is all my fault.  I am the worst mom ever!

"I hate this family!" he screams.
"I'd rather be at school where people appreciate me!" he hollers!
"Oh great...schools out today, I have to be around YOU PEOPLE."

He thrives on the schedule and dare I say, pressure of school.  He is very independent and would really like to do his own thing most of the time.  He always plans his social calendar, so that he doesn't have to sit around spending time with us...especially with his brother, with whom he fights like cats and dogs, oil and water, fire and ice!

Our new routine is that he goes to the public library most evenings after school for a couple of hours to get his home work done.  He just can't work with the distractions here at home.  Of course, he refuses to close his door and work.  It's almost like if he has an audience, he will perform.  "Oh my God! This is so hard!  I'm so tired!  This is ridiculous! Why do they give me so much homework?  This is really cutting in on my free-time!"

One night last week, Hubby calls him and says, "Are you almost finished? I need to pick you up around 8 o' clock."
"I can't make you any promises, " he says.

Over the Christmas break...he really put me through hell.  He hated all of that free time.  It was just more time to think and be anxious about what he was going to get for Christmas.  He revised his Christmas list after doing detailed research about 8 times!  I couldn't wait for the so-called break to be over!

Where I worry non-stop about Red...as I wrote here, "Dear Worry"
Will he ever be able to make it in the world out there on his own?
Will he ever be truly happy?
Will he take his special interest and turn it into a career and be able to take care of himself?
I have many doubts and fears....yet, I remain hopeful.

Although this adolescent phase where hormones rage, there for he rages, explodes and generally drives me to drink...
I have no doubt that his future is bright.
In fact it's so bright...it burns my eyes.
Where are my shades?
Posted by Karen Wesley Writes at 12:00 PM