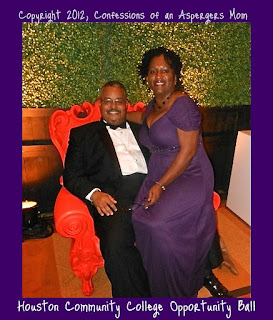 Saturday night I am totally buzzed from French Martinis, the drink of the night.  Hubby and I are back in the hotel room as we await late night room service.  I check out Facebook on my phone to see if there are any responses to the picture I posted at the Charity Ball we were attending. There are pleasant responses to the picture that bring a smile to my already happy face.

I also note Red's Facebook status which reads something like this:
"I am so tired of seeing couples every where I look.  I am so jealous.  Because I have so many problems, I will probably never have a girlfriend or a wife.  My life sucks!"  This is a kinder, gentler version of what he said.

He is at home with my Mom in his room, obviously feeling a little lonely and bored.  I've told him a million times before, when you put these heavy messages on Facebook, you are not showing yourself in positive light.  If you want your friends to have "good thoughts" about you...you have to be more positive. I really think he believes this will make some girl feel sorry for him and go out with him because of being sympathetic.  That's not going to happen.

I respond to his post, "Go to bed Red."  That's all I can muster in my slightly inebriated state.

When we get back into town the next day, the funky state of mind is still in full effect.  He is invited to a movie-birthday party that night.  When it's time to go...he crawls into bed to hide.
"I'm not going."
"Why?" I ask
"I just don't want to go."
"You're really going to disappoint your friend, which is sad.  You always complain that you don't have any friends, yet, you're risking hurting your friend's feelings.  But hey...it's your life.  I can't live it for you. You have to call him to let him know you're not coming."
"I'm not doing that. You call him."
"Nope.  He's your friend."
"Besides...I don't know what movie they're going to watch.  Everyone will probably ignore me." Aah...there we go.  It's anxiety.  I may not have control over the situation.  That's why I don't want to go.
Luckily a few minutes later, said friend calls.  They talk about the movie.  They agree to watch Harry Potter.  So off he goes. Yay! He reports having a great time...by the way.

Sunday the funky mood lingers.  By Sunday night we are adamant, "I'm Not Going to school tomorrow.  I hate school!"
Great here we go again.   We went through this same time last year.   Again he goes to post some negative diatribe on Facebook.  I tell him to take it down.  What does he do?  He un-friends me.  "I'm tired of you baby-sitting me on Facebook!" Not acceptable.
"Either un-block me or shut down the account," I say.
"Fine! I'll just delete it."

Monday evening I get text from my son's girlfriend.  "I'm really concerned about Red's status on Facebook." Apparently...he's back online. Before I can go talk to him about it...his phone rings.  It's Slim Shady (his older brother).  He wants to know what the heck is going on and why Red is posting such things.

I go to his computer while he's on the phone.  I log into his Facebook account...luckily he has his password set on "remember me".  I add myself back as a friend.  And I read the status which basically says, "I hate my life.  No one cares about me.  I should just commit suicide."

What the heck is going on?  Why is he suddenly so animated and depressed?  My older son makes him take the message down.  Talks to him for a while.  It's apparently about not having any friends...although he does, and especially about not having a girlfriend.  Slim convinces him to shut the computer down and go to bed, which he was refusing to do for me.

I go back to my room and answer my "friend request" that I sent myself from his computer.  I get straight to my detective work.  Apparently, a young lady who he considers to be a good friend, posted on Saturday night that she is now "In A Relationship" along with a picture of her new guy.

So here we go again.  All of this is about a girl.  He has no intention on harming himself.  This is all about attention.  What he doesn't realize is this is not the kind of attention that he wants.  Your average typical teen, can't deal with all of these heavy feelings.  The thing that's really scary, is that it seems we are right back to where we were last year when another female friend entered into a relationship.  That did not end well.  By the end of the school year, he was in the hospital.  I don't want to go back there.  I remind him of this fact.  He doesn't want to go there either.

We have a long conversation before he goes to bed that night.  I remind him of all the things that are good in his life and the things he has to look forward to including, a C-Squared club meeting the following day.  C-Squared is a "No Place For Hate" anti-bulllying club at school.  I encourage him to be positive so that he can attract the right girl at the right time.  (I know...Good luck with that one. )

His Facebook status on Monday night reads, "Much better day today." And the girl...the one in relationship, "Liked" his status.  Positive thinking works.

Agent 007 Aspergers Mom is on the case!  Can you hear the music?
Posted by Karen Wesley Writes at 9:14 AM