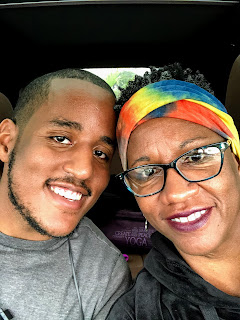 At this point in our lives, with one son age 20, and the other age 24, I try not to freak out every time something happens with them.  Every time they call or text me in a panic --which is sometimes at the exact same moment, I  play it cool.

My self-talk is, “Somehow, this will work itself out. Karen, you have been freaking out their whole lives about everything. The truth is, things usually do work out...one way or another.” After the heart attack.

For months, I have known there are major changes coming down the pipeline for Kendal (my 24-year-old). Kendal is on the autism spectrum. He also has a laundry list of co-morbid diagnoses. He has been living in a townhouse apartment with his older brother Adrian, for nearly 2 years now. He has remained employed the entire time. In fact, he’s worked steadily for the past 5 years. He is happiest when he is busy working.

It turns out that life is taking a different path for Adrian.  He will be relocating in the  Spring. He is going to become a father. (Yes. I will be a grandmother. I have all kinds of mixed emotions about that.) I’ve raised three children.  I am very much aware of how much it changes your life. Having a baby will be the biggest joy, the greatest love, and the most difficult thing he will ever do in his life.

Once the baby arrives, Adrian will not have the time to dedicate to taking care of his brother, nor should he have to. He has been helping Kendal out with transportation, managing his finances, personal hygiene, and self-care. He has been a constant sounding board and top advisor. Adrian will need to focus on his new baby son and the family that he will be building. He has been incredibly patient with Kendal --helping him take many steps towards manhood and for that, I am eternally grateful.

Instead of freaking out and going into helicopter-fix-it-mom, I thought I would sit back and see what plans Kendal would come up with on his own. At first, he said he was determined to stay in San Antonio, which I thought was awesome! He started working with a Life-Skills Coach through his employer (Goodwill) to help him figure out what's next --looking at housing options and better-paying positions.

When I didn’t see much progress, I suggested that maybe he look into Gary Job Corps in San Marcos, Texas. It’s located just between here and San Antonio. Job Corps is a free structured, living and training, government program to help young people develop skills for a career. Kendal has been talking in circles about possibly going into a trade for the past two years in between his delusional get-rich-quick-and-easy, entrepreneurial solutions.

Kendal was excited when he checked out the Job Corps website. Still excited after starting the application process and talking to the recruiter. It was great! Until it wasn’t. That freakin’ anxiety crept up and took over.

I woke up one morning to the message, “Job Corps” has bad reviews. He also sent a link with some horror stories about things that have happened at the San Marcos location. Stories of drugs, violence, filthy accommodations, terrible food, horrible, health and safety concerns, uncaring staff. Mixed in, there were a few stories of success. Of course, Kendal’s anxiety is drawn to the worst, possible case scenarios.

“I’m not going to Job Corps.” was the follow-up text.

Well, there goes my simple solution to just nudge him in the right direction and let him figure it out for himself.

Since then, there have been weeks of extremely high anxiety (mostly him). I’m playing the role of the cool, namaste, mom --acting as if I have no stake in this game.

Most of his alternative solutions have no realistic workable plan. They are mostly a non-plan, where he’s going to become an entrepreneur with no money to invest in himself or a business, with no formal training or additional education. Somehow, that’s going to miraculously work out to him being able to live on his own and pay his own way through life.

Back to my mantra, ”Somehow this will work itself out.”

There are moments when I absolutely buy into my mantra. Where I’m all self-care, yoga, meditation, inner peace, namaste, and the law of attraction

In between those moments I am freaking the hell out while trying to pretend that I’m not.
-I can not do this again!
-I don’t even know where to start looking for resources. (It’s like I’m new here.)
-He will not cooperate with me.
-He is oppositional and works against me. It’s mostly the same with his father.

-I am just not the one-size-fits-all solution anymore!
-We need a resource and a workable solution, as in --yesterday.

Does one ever finish raising an autistic adult?

I's tired. So tired. (In my Shug from 'The Color Purple" voice.)

The other day he texts me. I could actually write a whole book about our daily text conversations. He texts me whenever a new thought runs through his mind. (Insert eye-roll here.) It would be un-freakin-believable.

“Why do older women seem to be attracted to me more than younger women?”
My answer? “I don’t know, but can you ask one of them if she wants my job?”
Posted by Karen Wesley Writes at 10:15 AM