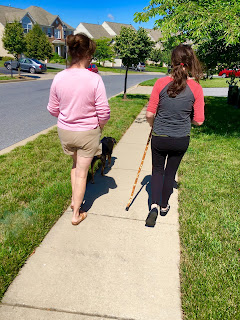 See that picture? That’s my wife and my daughter (15) taking a walk. Oh, and our dog, Roxie. Do you know why I’m posting this picture? Not because I love these two (which, of course, I do), but because of how proud I am of my little girl. The fact that she is out on a walk shows how courageous she is.

You see, about four weeks ago, my daughter had a seizure. It was her first. Not a little tremor—a grand mal. You know, the kind where you’ve fallen to the floor convulsing, with your eyes wide open but seeing nothing. The kind where you can’t remember anything about it. The kind where you wake up as the paramedics are gently placing you on a stretcher and wheeling you into an ambulance. Terrifying stuff.

Then, ten days later, she had another one. The first one was in our house, but this one was out in public, at a food court. Again, it was a grand mal, and it lasted longer than the first one. Fortunately, I was there with her, so I knew to roll her onto her side, cradle her head, and wait it out. Again, she woke up, disoriented, to emergency personnel hovering around her.

So what does this have to do with the picture up there? Everything.

Events like these would be traumatic for any adolescent girl; they can be positively paralyzing for a girl with ASD and anxiety disorder. The randomness of the seizures, the lack of memory, the waking up surrounded by strangers—it’s all so upsetting. The largest question that looms in her mind now is “What if?” What if I have another one? What if Mom and Dad aren’t around? What if it happens in front of my friends?

She’s on anticonvulsants now, and she hasn’t had a seizure in two weeks, but that doesn’t matter. The anxiety is so big, and the autistic tendency to perseverate is so strong, that the mere possibility of another event has kept her pretty much homebound ever since. She even missed an appointment with her counselor, whom she really likes.

Now do you see why this picture is so precious to me? Katie and I have convinced her that she needs to start getting out. We’re starting slowly, having her join us as we walk the dog in the mornings. And she’s doing it! She’s walking, she’s talking about everyday stuff, and she’s not perseverating over the seizures.

(The walking stick? That’s because she has mild scoliosis, and it helps her posture.)

Now take a look at this picture: 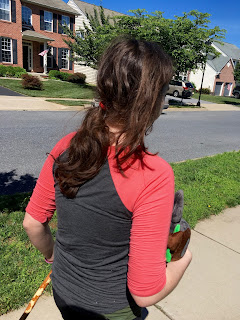 Do you see that plush doll in her right hand? That’s Phantump, one of her favorite Pokémon characters. She is rarely separated from this creature, and when she is, she’s holding another one of the more than 100 she has collected over the years. They are her security blanket. They bring her comfort. They help her bridge the gap between the fantasy world she so enjoys and the real world, which is fraught with challenges and dangers.

So there’s my daughter, out in public with a walking stick and a plush Pokémon. While most girls her age are swooning over boys, preparing for their learner’s permit, and paying close attention to their appearance, here is my girl, walking to the beat of her own drum. She’s fighting her fears. She’s facing down her anxieties. She’s pushing through some things no fifteen-year-old should have to face. And she’s still standing.

There was a time when I’d object to the plush doll. “You’re a young woman now. For God’s sake, leave that thing behind!” There was a time when I’d try to force her to push through her fears more quickly than she was ready to do—usually to disastrous results. There was a time when I knew pretty much what I wanted her (and all my kids) to be, without paying too close attention to her unique personality. But if walking this autism path with my kids has taught me anything, it’s to throw away all of my expectations and to not care about how other people look at them. Those concerns were more about me than the kids, anyway.

So march on, girl! I don’t care if you need to take five Pokémon with you. I don’t care if you choose one of the most ornate, obvious, obnoxious walking sticks possible. Do whatever you need to do. Just keep moving forward. Today, it’s a walk with Mom, Dad, and Roxie. Next Sunday, it may be joining the whole family at Mass. Or maybe not. It doesn’t matter. Take it one step at a time, and we’ll be right there with you.

These pictures, and this story, have been posted with the kind permission of my daughter (and, of course, my beautiful wife, Katie).

Leo is one of my favorite autism dads. He also runs a blog and a Facebook Community called "Autism Blues".

Leo and his wife Katie live in Maryland with their six children, ages 7 to 16, all of whom are on the autism spectrum.  Yes. You read that right! Six children on the spectrum! I am truly inspired by their humor and grace as they parent their six children.