Autism “life is like a box of chocolates. You never know what you’re gonna get.”  Will it be a pleasant day? Will I be able to get my chores done, exercise, write, go to the market?  Will the whole world be shot to hell in a hand basket by just saying one thing, that sets off an explosion that will last for hours, or maybe even days? Will I get one of those phone calls, that makes my heart start racing? Autism parents all know that feeling when the school's number is on the caller i.d.

I can feel my summer depression setting in. I thought with Red living away and being busy working; I would be able to avoid it this year. Silly girl. I should know by now, never to get too comfortable with life in the easier lane.

With Red gone, issues with Blue are bubbling to the surface.  He started off summer with a bang of a meltdown which essentially lasted three days. And by start off, I mean, the day that school was out. Bam!

One minute we are shopping, laughing and having a great conversation. He met me in TJMaxx after SAT tutoring, which was in the same shopping center. We were picking out girly gifts for my god-daughter.  He talked about how much he enjoyed spending time with her just the week before. "She loves me, mom. I think she looks at me like, kind of a big brother."

Moments later, we are in my car when I apparently said the wrong thing. He went from zero to one hundred in nothing flat. He was angry and decided he could no longer be in the same car with me. He got out of my car and walked, at night, in the rain, 2 miles to get home.  He could not be in the same car as the woman who chose, "tonight of all nights, the night before the SAT," to correct him for yanking his earbuds out of his ears. I had no right to open my big mouth about earbuds that I have replaced dozens of times, because somehow, they keep getting broken. It has nothing to do with yanking them by the cord out his of ears. They just keep shorting out for some strange reason.

Of course, it was his choice to get out of the car, but everything that happened that night was all my fault, and of course, he was furious with me about it all ..for days!

The past month of school has been full of stress with the end of his 11th-grade year. He had AP Exams, State Testing, and the SAT on top of his regular class projects and final exams.  In fact, the next day after the epic meltdown, he was scheduled to take the SAT for the 2nd time.  I'm sure this was a major contributor to the anxiety which sparked the outburst. (And No...he did not end up taking it the SAT the next morning. Again...all my fault.)

I was steaming mad about all of the expensive tutoring we paid for to help him with the test, not to mention, paying for the test itself, that he now refused to take. I couldn't push him into doing it. That would just be another disaster.  Anything I said or did for the rest of that entire weekend, added fuel to the fire.

He has had an incredible year of social success at school. He developed some wonderful relationships with friends, both male, and female.  The females especially have been a great source of strength and comfort.  They give out the best hugs when he is upset.

He also has developed a mentor network at school. His Computer Science teacher who is also on the spectrum, is a wonderful resource that he could access daily. He has also basically become friends with his old Science teacher, who is now his Club Sponsor. She is quite familiar with autism because she is married to a man with Aspergers. She also has a brother with autism.  In other words, he has created a substantial support system that suddenly, he will not have daily access to now that summer is starting
.
So, let's add all of the pressure from the end of school, to the sudden absence of his support network, then add a splash of SAT testing, and wham! There you have it! The makings of an epic meltdown.

I remember that feeling in high school when school was out for the summer, I wouldn't  have easy access to my friends. For one thing, I usually worked, and most summers I worked full-time. I loved the money, but I hated the time it took away from hanging out with my friends. It felt like I was going through withdrawals from them. So, I get it. For him, these feelings are intensified as everything is with autism, especially social relationships.

At this point, I can not say, or do anything right. I can not parent. I can not guide. I can not suggest.  I can not even listen, without succumbing to the urge to say something, which will ultimately be the absolute worst thing anyone in the history of the world, could say.  I’m screwed! I feel purposeless, other than occasionally handing out money and providing transportation. And apparently, I can’t even provide transportation without the world nearly coming to an end.

Simple conversations between just the two of us are a strain, to say the least.  A conversation where the two of us could get to the root of our communication problems, would be impossible. We decided it would be best for me to sit down with him and his therapist so that we could hear one another. I needed to find out what he wants from me at this point because it feels like he doesn’t want anything. Yet, he makes a point of telling me that I’m not being supportive and understanding. I’m like, how supportive can I be when you’re always so angry with me?

Through our session with his therapist, I discovered that when he is at school working with peers, teachers and adult mentors, he feels successful and more adult-like and independent. Somehow that all goes away when he comes home and has to be reminded what to do. It makes him feel less powerful and in control. And he loves control! In fact in the middle of one of his meltdowns recently he told me, "I hate limits!" Of course, he probably feels more limits when he is here with us than when he's away from us. That's only natural, right?
I decided that I need to find ways to recreate some of the autonomy that he has at school. I need to give him more of a sense of control so that he can feel more independent.  He needs transportation from me, but at the same time, he probably hates the fact that he needs it. Yet, the prospects of driving are a little nerve racking to say the least. He says he wants to work, but going through the process of actually making that happen, feels overwhelming to him. 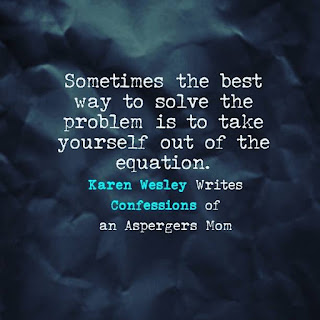 I decided it is time to add to my village. When you can't do everything yourself, find someone who is better at it. I've decided to hire a replacement mom. Haha! I wish! Actually, through my contacts in our school district,  I was able to find and hire a Job Coach who will work with him privately. It's cheaper than sending him to a camp or a social skills group that would help him to gain these skills.

Every attempt I have taken to help him look for a job or plan his time this summer has been met with disdain and the attitude of I have no idea what the hell I’m talking about. The value of him working with someone whom he will cooperate fully, is priceless.

The Job Coach will help him write a resume,  go through job application process, and work on interview skills. She will also help him look into some volunteer opportunities to help fill his time and maybe even work with him to get the ball rolling with his driving instruction through the driving school.

I believe there is nothing like the feeling you get from being a leader and doing something to help others. I hope that adding some opportunities for success and structure to his days, will be good for his mood.  The less time he spends in this house with me, the better for all us. He's happier when he's accomplishing something.

At this point in his life, I have to step back and let his support network help transition him into adulthood. It has been proven in the past with his brother, Red.  It truly does take a village. And sometimes, the best way to solve the problem is to take yourself out of the equation.
Posted by Karen Wesley Writes at 6:34 PM