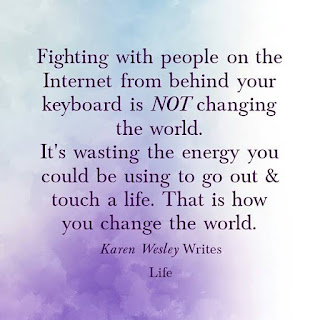 In the wake of the Orlando shooting a few days ago, social media has been full of sorrow, ranting, anger, arguing and so much more. I usually reserve my fighting energy for the battles right here in my home, trying to raise these children. I fight for services for them and their education. With what I have left, I write. I hope that my writing helps other parents to be inspired to keep fighting for their children. I go out into the world and try to touch a life in some way, whether that be helping a neighbor by picking up her children, or taking them a gallon of milk when she is sick. Babysitting for a single-mother friend, who doesn't have family support. I will give a smile, a compliment or encouragement to a complete stranger.

After so many were killed once again,  by a madman with a gun/or guns, I've been feeling helpless, depressed, sad and sometimes even angry, especially, when politicians start their rhetoric and pontificating.  Nothing changes.

Then I read this, and I knew I had to share it with my audience. It captures the feelings of helplessness that a mother feels when we see these things happening in our world. We want to protect our children, but we are afraid that maybe we can't.

The following post was written as a Facebook Status by my friend Kendra Norton-Qualls. Kendra is a friend and fellow autism mom. We have a kindred spirit kind of connection. She is an artist with words.

I wish men knew what it felt like
to hold a life inside of you
for months and months
and months
to have that life be dependent on you
for e v e r y t h i n g
this is a man's world is it not?
did I get that wrong?
well
where the fuck are they??
why don't they lead?
do they know how?
9 months is too damn long
do you know what it feels like
to carry a LIFE - for months on end
to have your whole body change
your emotions - change
your perspective - change
your life - change
and then to watch that life
grow and learn and mature
to have that beautiful blessed miracle
be snatched brutally from this earth
because MEN AND THEIR FUCKING GUNS!!!
well I don't (thank the goddesses)
but too many mothers do
way too many.
how do you receive a text
where your child is trapped in a bathroom
because a man and a gun
and you can't save him
you can't save him
you can't save that life
that you held for months
that you nurtured and cared for
you can't save your miracle
because men and their guns
sometimes I don't like y'all (men)
sometimes I don't wanna be compassionate
or understanding
or empafuckingthetic
sometimes I have little to no respect
because most times you are weak
demonstratively weak
before you start to argue
look at our "man's world"
ask yourself who is the glue in your own life
I bet it's a woman
shit we do so much
SHIT!!
do we not populate the fucking planet
do we not give you love
over and over and over and over...
who is your first teacher in life???
why do you ignore our cries??
what are you reaching for??
it is fair to hold you accountable
men
it is fair
fix your fucking mess
you dominate the business world, the financial world and the political world
the world of weapons
the world of war
dominated by men
fucking lead or get the fuck out the way
9 months is too damn long!!!!!!
I'm so upset.
I don't care if this is an unfair rant
y'all are unfair.
after Sandy Hook and nothing happened
nothing changed
y'all just went on
where were your VOICES!! Of outcry? Of disgust? where are they now?
Is this what male leadership is?
A world where we give birth to life
and then y'all take it away???
What is wrong with you?
Is it our fault?
Is this burden to be laid at our feet as well?
(shyt. 😞 we do so much)
No mother who has lost her baby, whether our uterus birthed that baby or not
No mother cares about your empty ass thoughts and prayers!!!
We want our babies back.
how come you're so good at sweating us for sex
but not sweating your fellow man for peace?????
I swear sometimes I don't believe in you anymore.
I wanna take my own boys far far away
and save them
save them from this world of "men"

I felt compelled to share this with you. However, I still won't argue about it. When Kendra speaks of "men" of course, she doesn't mean "all men." She is married to a pretty awesome man and has a couple of young men that she's raising.  For that matter ...I love and want to protect the young men that I have raised. You know who she's talking about ...and so do I.
Posted by Karen Wesley Writes at 5:18 PM