“Did you hear about those black men being shot? It could be one of us next!”
Before I opened my eyes this morning, this was a group text message that Red sent to our immediate family, including both of his brothers.
Blue's response?
"Dude. Calm down."

After sending the message,  there was an eight a.m. phone call.  I didn't answer so he called his brother. Blue comes into my room, "Will you please talk to him? He's freaking out!"
I attempt to wake myself up as I dial Red's number.
“I'm trying to figure this out," he says. "Does this only happen in certain areas where people are poor or could this happen in our neighborhood to my brother, or me?”

Can you hear the fear?

Can this happen to us just because we are black?

Here we are again America. I really just can't with you. Black men are being executed by the police without a trial or charges. Two murders were captured on video, uncut, unedited for public viewing on social media outlets over the past two days.  I have refused to watch either video.  I don’t know all of the gory details about the individual incidents.  I don't want the graphic images playing over again in my head,

I don't know everything that happened. There will be much dispute over the coming days I'm sure.  I do know that black lives were taken. There are children who no longer have a father.  There is a wife who no longer has a husband. A girlfriend watched her partner being shot four times, after a traffic stop, as her child watched from the backseat of the vehicle. And my law-abiding sons are scared! 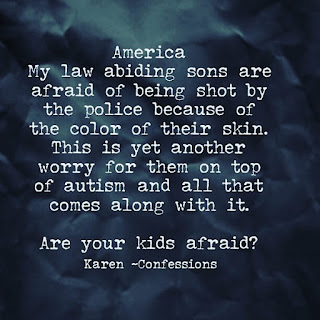 I have not watched the videos. However, I have not been able to avoid all of the outrage and commentaries on social media.  I can not completely hide from it.  I can not shield my sons from it.

What is happening isn’t something new.  My husband and I have had the "what you do when you interact with police," conversation with our sons countless times before.

I wrote about this issue in a blog post after the Trayvon Martin murder.  I wrote about the compounded fear that I have because two out of three of my black sons also have a hidden disability -autism, which impairs their social-communication skills.

Yesterday, I met Red at the bank to straighten out an ordeal with his checking account. I won’t get into the details, let’s just say it involved him using his account to pay for something on PayPal and some subsequent unauthorized charges.  As we’re talking to the clerk at the bank and she is trying to help us. He repeatedly talks over the sound of her voice, not listening to what she is trying to say to help us. As she works the transaction on her computer, he begins talking to me loudly, about issues of a personal in nature that everyone in the bank doesn’t need to hear. I try to get him to quiet down. I ask him to stop talking until we are finished transacting our business. He clearly does not understand when he should be talking, when to be quiet, and when to listen to important instructions that will ultimately help him solve his problem.

I thought of this interaction last night before I closed my eyes after I heard about the first shooting.
Would he understand an officer’s directions in a tense situation?
Would he be too busy talking instead of listening?
Would his actions be seen as defiance before any questions were even asked, or before he could convey that he has autism and difficulty with communication?

Here in Texas, his driving permit has a notation that he may have some impairment in communication.

Will he have the opportunity to present his license before a nervous police officer would shoot because of his preconceived fear or even hatred of my son’s race?

Red has had several interactions with law enforcement in our community. Thus far, the interactions have had a positive outcome. Yes …his anger has gotten out of control, in public. He has dealt with officers on the campus of his middle school and high school. He has even had interactions with them here in our home when his anger got the best of him.  Each officer appeared to be trained in de-escalation.

Red has always been savvy enough to tell the officer that he is speaking with that he knows and is “friends with” a number of officers in our local police department.  He knows them all by name and drops those names in a hot minute!  (“Keep your friends close and your enemies even closer.”)  He has several of the officer's business cards. One officer would even drop by our house periodically just to have a chat with him and see how he’s doing.

So this morning when he asked me should he be afraid. "Are the officers in our area better trained than the ones who have been killing those black men?"  I told him yes.  I lied. I hoped. I made light of my fear so that I would not increase his anxiety.

I try to be optimistic. I try not to play into our fears too much. We have to face them. We can’t hide here at home. We have to go out into the world.  We can’t afford to overreact in our interactions with law enforcement.

So once again today, we talk about what to do,  if you are stopped and approached by law enforcement.
Now, will Red be able to follow these directions? I have no idea. Frankly, I would be surprised if he does.

Intellectually, Blue seems to understand these concepts, but under extreme anxiety, what will be his reaction? Will his facial expressions be appropriate? I don't know for sure.

Where I have fear, I can only hope that the presence of an officer and a gun will help them remember our conversations.  I pray that they will remember the images of so many of us who have been taken away far too soon.