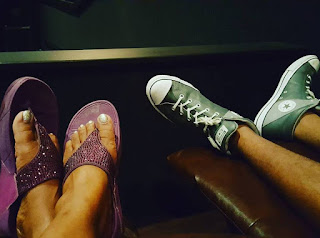 A year ago, if you told me that I would voluntarily take Red to a movie, just the two of us, I would have laughed in your face. I imagine it would be hard for most mothers to admit publicly that they do not enjoy the company of their own child. However, a year ago, I did not..at.all. In fact, I tried to avoid him whenever possible, which wasn’t often enough. At times it felt like he was purposefully trying to drive me crazy. He was borderline abusive to me (mentally). That was because he was going crazy and he wanted company.

Cut to this Sunday afternoon, I texted him and asked him would he like to go see “Finding Dory” with me.  I was tentatively expecting a rejection. I knew he wanted to see me as he usually does on Sunday, but I thought the idea of an animated film which was my suggestion, would be met with his usual opposition. Surprisingly, he said, “Sure.”

I picked him up from his house. We went to the mall to get a new phone case for his iPhone. We also looked at a few things for me, as he very loudly shared his philosophy about why he needs to get married young, while he "still looks this good because it’s important to look good in that suit when you get married.” And I guess when you take the suit off on the wedding night. Because that ladies and gentleman, is what love and finding the right wife is all about …how you look! There was a lady in the women’s department who laughed out loud every time we got near her. I do believe she was laughing at us, not with us, because he was so dead serious.

When we finished at the mall, off to the theatre we went. Now, in the car he was his usual annoying self, talking about bodybuilding, diet and working out, non-stop. He repeated the same sentences and questions that I had already heard a hundred times this week over the phone. Once we reached the dine-in theatre I told him, all conversation is over. There would be no talking during the movie. He agreed.

We watched the movie quietly together. We laughed out loud. I tried not to cry. He followed the storyline without asking any questions or narrating like he used to at home when we would watch a movie together. He wasn’t rigid about what he ordered to eat because of his healthy diet. He had a burger, with no fries, but opted for their delicious homestyle popcorn. He was totally socially appropriate. There was no complaining. It was refreshing. It felt so good to enjoy his company.

When I got home, I reflected on our time together as I climbed into bed. I think one of the reasons that there was no conflict, is because it was just the two of us. He didn’t have to compete for my attention with his brothers or his father. Blue wasn’t there to give him a hard time about his repetitive dialog. His father wasn’t there to be all “fatherly.” We just had a good time. He enjoyed the fact that it was all about him.

Now, in the past, the fact that it was just the two of us has not stopped him from going off the deep end. There is probably a combination of factors that came into play. The biggest one I think, is that he is finally growing up.

By the way, I think my new nickname should be Dory. She has short-term memory loss, as do I (thanks to my kids and menopause) but in her own goofy way, she manages to get through the challenges in her life. There is no rhyme or reason to her methodology, she just keeps swimming and somehow, it just works.