Nothing Going On but the Rent 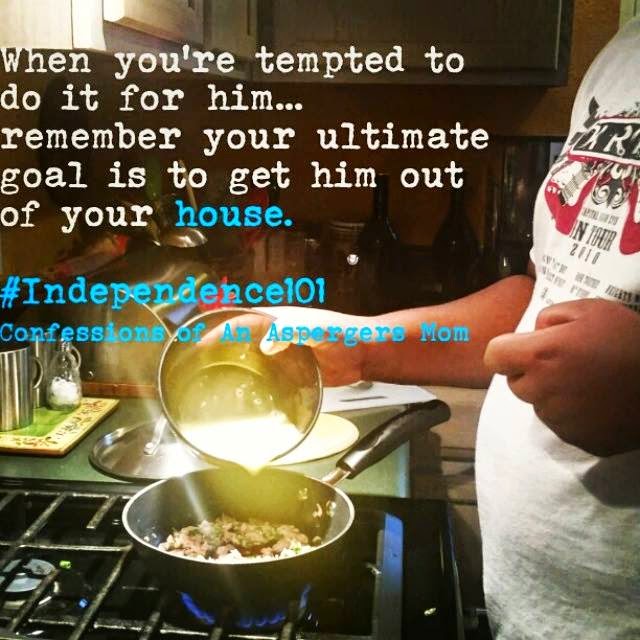 The road to  adulthood is long and hard.  The transition to middle school was not easy, but we made it. High school was pretty god-awful.  We've had a transition to adulthood plan in the works for a few years now for Red. I wrote about this Transition to Adulthood Plan not long after graduation. All I can say is boy, was I naive. This shit is hard!

Red has been holding the same job for 8 months now. That is huge! He still loves it and they seem to love him.  There have been zero incidents at work. Zero. He has been on time everyday, with the exception of the school bus being late once. He handled that responsibly by calling in to let his supervisor know what was going on. He has never missed a scheduled day.  Once, recently he decided he wanted the day off to go to Six Flags with his girlfriend.  He used the employee scheduling text message system to find someone to cover his shift ahead of time.

One of the issues that I am seeing recently, is that he seems to be getting up later and later to catch his ride to work. As in, literally 5 or 10 minutes before they get here is when his feet finally hit the floor.  He is also back to needing a couple of prompts in order to get up.

If you get up only a few minutes before your ride, you can't possibly do everything you're supposed to do to with your hygiene before leaving the house. You don't have time to eat.  There has been a time or two that he has gone out without taking his meds.  He usually catches his ride by the skin of his unbrushed teeth.  All of these are independent living skills that he will need if he ever wants to live on his own and actually to be able to maintain employment or go to college.  I won't be around to prompt him for the rest of his life.  I can't come to his rescue when he forgets his meds. Again ...his motivation needs to be internal, as it is when he gets up for church every Sunday morning (zero prompts).

Another thing that has improved, is the actual fighting with Blue.  (Instead he fights with my mom, who will NEVER back down by the way).  Blue has softened just a little bit and doesn't accept every invitation to fight (unlike my mom).  Blue has become  more willing to engage with Red in some positive ways.  They occasionally play games together.  Sometimes, they may watch videos on You-tube or maybe even a movie together.

I have been looking into various Adult Transitional Living programs for adults with autism,  Americorps,  Minnesota College of Life, etc. The feedback that I have received is that since he is 18, and his own legal guardian, he must to be 100% willing to participate.  He must be self-motivated, free of aggressive or threatening behavior, able to get along with others in a living environment, be able to and willing accept direction.

He is not demonstrating any of this at home currently.  One intake counselor said to me, "If he can't get along with his 4 family members, how do we expect him to get along with a larger group of strangers?" Well, the truth is that he is usually better with strangers than he is with us!  Of course there are no guarantees that this behavior won't transfer in another living environment.

The word I've been getting from admissions counselors is, "Why don't you keep in the 18 plus program through the school district as long as possible, so that he can do some maturing? There is nothing as intensive as the services that the school district provides ...for free." He is receiving transportation to work through the school district.  He gets job coaching, social skills training, life management, Occupational therapy and person centered planning, which is great! The problem is ...none of this gets him out of my house or away from his dependence on me.  Not to mention his sort of obsession with getting my undivided attention all.of.the.time!

I am still in the process of getting him connected with our local department of Mental Health agency for autism support services.  They can help with community support, counseling, supportive housing (group homes) and several other services.  This is all great however, dealing with any agency that is funded by the government is always a slow, arduous process. After our initial intake meeting with them over 2 months ago, we finally have a psych evaluation scheduled next week.  He will need that before he can move into any supportive living arrangement.

I am also working on getting him connected with DARS (Department of Rehabilitative Services). We finally have our second meeting with them at the end of this month. (As I said, slow and arduous.)  They will hopefully help pay for some of his education,  training, therapy and quite possibly independent living services needed in order to obtain and maintain full-time work, which he says is his ultimate goal.

Meanwhile, we deal with excessive behavior caused by his severe anxiety because of the uncertainty of everything that he is facing in this transition. He has to make a decision about college or trade school. Where will he end up living? He's still looking into driving, but afraid of the costs and the responsibility that comes along with that. Of course, he is also learning financial responsibility as an adult. Period. OMG! He will he not be able to buy everything that he wants, the second he wants it! Will he have to struggle like every young adult does while they are getting their education and finding their way in life? This will be surely be tragic! Unimaginable!

Oh and of course, the dreaded trying to run a video editing business, with plenty of talent but absolutely no clue about expenses, profit and loss and record keeping.  In other words, he is trying to run a business with no idea how business ACTUALLY works! He is fixating more than ever on what the next gadget is that he needs to buy, in order to make this business a success! Because equipment is like magic! It will help you "look more professional and be able to charge more money."

Even though he is getting support from his job coaches, his Occupational Therapist and Ms. E. one of his old high school teachers, who comes here to work with him on his business ...none of them know what they are talking about!  We are all just conspiring to not let him spend all of his money!

As I said, he has been holding this job for 8 months now.  When he got his first paycheck, he was furious with me when I made him take money out of he bank to pay for his own expenses, such as eating out, transportation and entertainment.  Now that he is receiving SSI, his Occupational Therapist has helped him set up a budget.  He is buying his own groceries (specialty items) that the rest of us don't eat.  He pays for all of his entertainment, eating out and dating (yes...6 months later, he still has a girlfriend). He is also paying rent!!! I've been working with him for 3 months on balancing his checkbook and keeping up with his spending.

Just the other day, he took out his checkbook on his own, balanced it and wrote out a check for his rent with zero prompts! Then he went to take a shower. And then I passed out from shock!

The struggle is real folks.  There are so many steps on the road to independence,  I must admit, I was extremely naive about how much work this is.  Not to mention, how much anxiety and behavior we would have to deal with as a result.  I really feel like this is the hardest stage of life yet.

There is however, incremental ...progress.

p.s. I appreciate your comments. I really do. Helpful suggestions are always welcome. However ...if you just want to tell me how I'm doing this all wrong, send me a direct message.  I will then send you my address so you can come and let Red live with you!
Posted by Karen Wesley Writes at 10:10 AM