Every single day I spend quiet moments thinking about my children --trying to understand them.  I want explanations for their behaviors.  What are they trying to tell me by this behavior? Is this behavior  hereditary? Is this a learned behavior? Is this innate? Is this manipulation? Do they get this from me? Does he get that from his dad or his grandma? Or  ...oh my God! He's acting like my father!

I know a lot of people don't like the puzzle symbol for autism.  But aren't we all puzzles? A puzzle doesn't have to indicate a missing piece.  Why can't it be about how we put all the pieces together and how sometimes, they're upside down and need to be turned around?

I think I have Blue pretty well figured out. He's nowhere near as complicated as his brother. He is a little closer to textbook Aspergers -extremely intelligent, deep thinking, thinks outside the box, very curious, a little nerdy (he says he would like to be nerdier). He will probably be a world changer.

You may not realize he has Aspergers by talking to him.  He will actually listen to you during a conversation.  He will ask you questions and be interested in you.  Although he would prefer that you see the world as he does, he is intelligent enough to realize that that's probably not going to happen. That doesn't mean that he has to be happy about it.

I'm in awe as I watch Blue constantly evolving, growing and maturing. In his last Person-Centered-Plan meeting the goal he set for himself to try to be more positive in his interactions with peers. He still has a few social issues at school. He has a tendency to comment on everything that everyone else is doing, and when it comes to peers and his brother, he must point out how completely idiotic their behavior is. Peers tend to not like that so much, so he ends up in a lot of arguments.

With his new goal of being more positive, one of his teachers who attended the meeting observed that Blue is not very positive about himself.  He can't really accept a compliment. He doesn't believe that he's smart, handsome, funny or a good friend. He tends to focus on the negative.
"Everyone hates me," he says, which is far from the truth.  The kid has his own social club for people who are different! How brave and forward thinking is that?

So for the next month or so, he is to focus on positive things about his own life.  What is the good that happened in your day? Write it down. Oprah says write down 5 things to be grateful for. We settled on 3 because of course, he hates superfluous writing (and he doesn't care for Oprah nearly as much as I do).

Since he started writing down and observing the positives, he has discovered that he actually is a good friend. He has a female friend who describes herself as "weird and most people think I'm strange." Blue is especially kind to her. When she's upset he comforts her. She is grateful for his friendship.  He seems to be the one boy, who she doesn't have a crush on.  She has told him that he is, "one of the kindest people she's ever met." That's saying something! He can actually be less than kind if he thinks you're an idiot, and most high school students in his opinion are idiots. Apparently, he sees this young lady as unique and intelligent, instead of "weird."

As a mom, I am happy that he has developed this friendship because it gives him an opportunity to get to know and understand a young lady without the emotional entanglements of a romantic relationship.  This will serve him well whenever he decides to date.

Blue has even been kinder and a little more patient with his big brother in the past few weeks. There have been moments when they hang out together.  He has been teaching Red how to play one of his favorite video games. They've watched movies in Red's room. It's been incredible!

Of course, there are still those moments where he's ripping Red a new one, especially when Red is being his super annoying, button-pushing self (a behavior I believe he inherits from my father).   Still, there is improvement. I appreciate any time that he gives to his older brother both because it makes Red happy, but mostly because it means for the moment,  Red isn't bugging the shit out of me!

Red on the other hand, completely baffles me.  I've been told many times that behavior is communication. When a child behaves a certain way, they are telling you how they are feeling, rather it be good, bad, anxious, depressed.  They are reacting to social and environmental stimuli.  For the life of me, I can't understand Red's motivation behind certain behaviors. 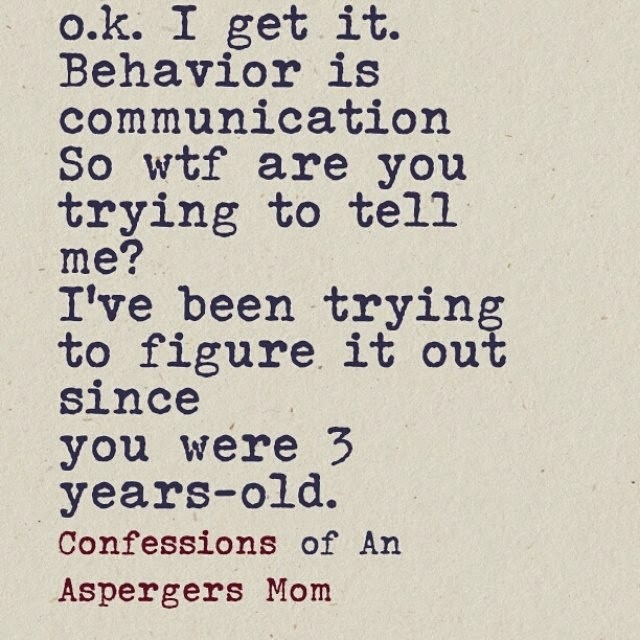 Some behavior is for attention.  He craves being the center of attention and if he isn't, he will find a way to make a situation be about him, good or bad. Hence, Christmas day for us this year was supposed to be more about relaxation, Christmas music, and just our immediate family unit.  Honestly, I would have preferred that one of the boys went away to spend time with family.  Unfortunately, that didn't work out.  I specifically tried to take some of the pressure out of the holidays, both for myself and for the boys. I didn't make it about gigantic gifts or large lists of wants.  That usually creates way too much anxiety and drama.

So my dear son Red found a way to create that drama anyway.  He couldn't allow us just to enjoy the relaxation. He had to stir things up and let us know his dissatisfaction with the world and his family in particular.  Where as Blue went out of his way to get me a small, thoughtful gift. Red made sure that he got several gifts for his girlfriend, but only wanted to know what his father and I  had for him and why he didn't have more?

I wish I could understand him more.  I am in constant thought about his behaviors and motivations ...wondering how I can help him or help him help himself.  How much is his personality? How much is autism, depression, oppositional defiance? What is related to medication? What is this medication really doing for him? Is some of it helping while some of it is making matters worse?

I'm beginning to see some of my father in him. The button-pushing behavior is definitely a trait handed down from my dad. My father loves to say provocative things both to get attention and to get people stirred up or upset.

I don't know if I will ever understand him completely. Maybe he is not to be understood. One thing I know for sure, this transition to adulthood seems to be the hardest stage of his life yet ...at least for me. I will continue to support him in whatever ways I can,  even if that support is from a distance. Sometimes, it's just better to work in the background and let him figure his own life out with the supports that he has in place. He is so blessed with a team of people that are working with him to help on the road to success.  The world is his for the taking, he just has to stand up and grab it.

Hopefully, I will live to see the day when he finally does.

Posted by Karen Wesley Writes at 7:35 AM