"Be kind, for everyone you meet, is fighting a hard battle." -Plato

One thing that having these special children has taught me is to always stop and think about the other person's perspective.  Because my children see the world from a completely different point of view, I no longer take things at face value.  They don't look like they're having any problems, but they are.  The battles that they are facing inside of their own heads.  They don't "look like they have autism, anxiety, ADHD, OCD, depression or a mood disorder.  Their challenges are not visible to the naked eye.  This does not mean that they don't exist.

Though my husband has no diagnosis, I think all of the men in this house actually have a perspective deficit. They just do not automatically think about what the other person may be thinking or feeling. I am often their barometer --the one who actually points out the different perspective.  When I do this, my husband accuses me of taking the other person's side.  I'm just pointing out that their actually IS another side. There is always another point of view.

The way that an individual sees and interacts in the world depends on a lot of variables. What is their life experience? Undoubtedly, it's different than yours.
What's going on with that person mentally or even physically?
Are they suffering from depression, some form of anxiety or some other heavy issue?

Lot's of people put on the bright smile and charm, even a great sense of humor. In truth, we have no idea how they're really feeling. Isn't the recent death of Robin Williams proof of that? O.K. I guess we should have known that he was often a bit manic and over the top, but I don't think most people had any idea how low his lows, actually were.

What looks all put together, flashy, shiny and successful, maybe a hot mess on the inside. Just because a person has a great career, is doing well financially, appears to have the happiest, most perfect family ever, does not mean that they are indeed, actually happy.  The truth maybe that that person is so spent from working so hard, that they have very little left over in their mental bank when they come home from work.

Just because that person has to be "on" all day in order to do their job, doesn't mean that they don't come home and want to hide because of social anxiety, depression or self-loathing.

A marriage that looks happy could be a source of internal anguish. We never really know what is going on behind closed doors much less, what is going on in someone's mind and heart.  The pretty pictures and happy smiles are not always what they're cracked up to be.

Some of the most successful people I know still have some kind of mental issues or insecurities.
You don't know what their childhood experiences were. You may not know what their relationship is with their parents and how that effects them now.
You just never know what battles that person is fighting, or what it really takes to maintain their life.

Before you form your opinions about another person, maybe you should try to really understand them.
Before you feel slighted, or angry or internalize something they said or did as a personal affront to you, perhaps you should actually communicate your feelings instead of making assumptions.

It could be that the influences and experiences in your life, have barring on your perceptions.  Whether or not we want to admit it,  deep inside we all have preconceived notions of certain people, based on race, sexual orientation, religion, economic status or level of education.  And most of the time we are DEAD wrong.

The same is true about most people. We're all unique no matter race, sexual orientation, neurological status, mental issues, economic status or whatever ...and we're all fighting something.

My own depression has taught me that my perspective may be skewed.  When I am feeling down, I have a tendency to take things that someone says or does more personally than it's intended to be. 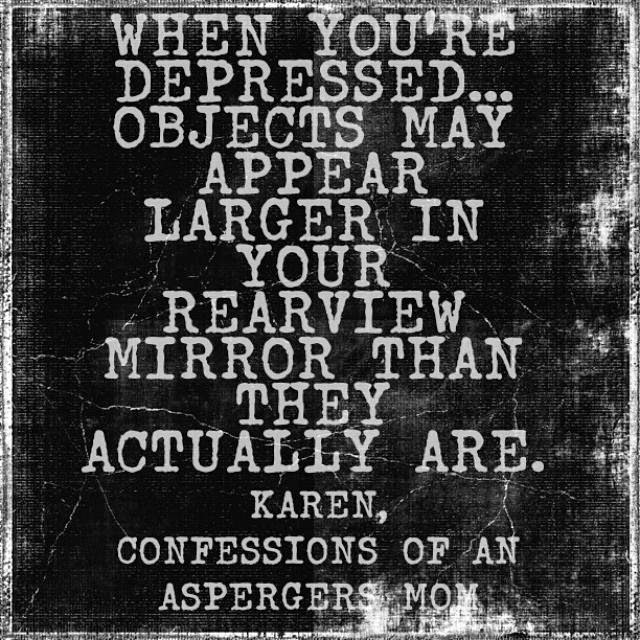 Sometimes we sit in stew in our own juices, holding on to anger, or negative feelings.
We don't communicate because we don't want to be confrontational or offensive.  The only person that really hurts ...is you. The supposed offender is off living their life, probably completely unaware of the offense.

In the end, the truth just may be that the person in question is just an asshole.  And even then, there may be a valid reason why they're an asshole.

It has been said, that I'm a bit of a Polly Anna. I really do try to find the bright side in any situation.  I usually try to find the good in a person, instead of just the negatives.  It's not always possible, but most of the time you can find something positive if you're really looking for it.

Having children on the autism spectrum has taught me that even through what looks like rudeness or what may appear to be abrupt or insensitive, there is usually a deeper story --another perspective.  The writer side of me makes me want to find out what the story is.
Posted by Karen Wesley Writes at 8:41 AM