The Case of the Stolen Bacon

*Warning there is some pretty descriptive, colorful language in this post. If you're easily offended, move on.

Lately, in the afternoons when Red is about to come home from work or school start getting this anxious, dread that comes over me. I know that sounds horrible to say, but it is my truth right now. Whoever would have thought that it's possible to feel that way about your own precious child? The precious little baby that you gave birth too. Well, he's my own not-so-precious, adult these days and I am just plain old sick and tired of his behaviors.

When he comes home in the afternoon, I usually haven't gotten enough stuff done. When he comes through the door with his long list of complaints and arguments, my ability to think -to focus is cut down by half.  My focus level hasn't been on full for months, so it's really cut down to about a quarter of a tank, about to hit empty with a quickness.

He comes through the door just as I am about to eat the bacon that my mom has made for me along with a couple of waffles.

"I want that! Let me have it!" He is standing over me, totally invading my space. I refuse to give it to him. He continues begging, insisting really. I finally give in, just to shut him up. I give him a half of a slice. "No I want the whole thing!" He yells, and then grabs the other half and puts it in his mouth.

I took it as, fuck you and your feelings. I want this bacon and I'm taking it. What are you gonna do about it? Nothing.  It was just blatant disrespect. I...was...livid!

To make matters worse, my mom chimes in with her outrage over what he did. The two of them start arguing. "Nana! This is none of your business! It's just a piece of bacon!" "I made that bacon for your mother! You have a lot of nerve!" Minutes later, she wants him to be quiet because she's watching her soap opera. Really? You get him started by chiming in on a matter that doesn't  really involve you. Now you want him to be quiet?

I didn't engage with either of them. I ate my late breakfast while it was hot and then went upstairs, knowing that he would follow and that would break the two of them up.

Internally, I was smoking hot! He kept saying, "I'm sorry! Why are you so mad?  Really mom!  It's just a piece of bacon. What's the big deal? You still had some left."
This is not an apology. It enraged me further.

I explained to him it wasn't about the bacon. It was about the blatant disrespect. "If you did this out in the world, at work where someone has food stored in the refrigerator, or in a roommate situation someone may just decide to stab you with a fork for reaching over and taking their food." (Especially if it was bacon.)  In what world is this acceptable behavior?
His reply? "I would never do that at work or to anyone else!"  Wow! Just wow!

I explained that the bacon was just the last drop in the bucket, that made the water overflow.  It's about the way he has been treating me for years and the increased behaviors in the past few months. While being a very generous person to his friends, almost to a fault, he won't share a french-fry with me! This is  about how he made me cry over Thanksgiving dinner because of his rudeness.  Then he says to his dad, "What's the big deal? I've made mom cry before."

It's about me being very literally at the end of my rope. I am stressed, depressed, pissed off and generally overwhelmed about the crisis that we've been living in for months. We have in this house the total ingredients for a divorce. There is enough stress and discord to totally tear this family apart. Luckily, hubby and I love each other and are determined to work through this situation to get Red out of here, thereby reducing the stress level.

Everything has been neglected.  Our marriage, our sex life.  The house is clean, thanks to my mom paying a housekeeper, but it's like a freakin ghost town as far as upkeep and decor. We need to paint, inside and out. Furniture is falling apart. Blue is walking around in pajamas are now skin-tight, capri pants. I haven't bought him any new winter clothes.  I haven't even shopped for myself! And I'm a shopping queen.  The pajamas I'm wearing are at least 5 years-old. No holes in them yet, but I'm sick of looking at them! I don't have time, energy or focus on anything other than how I'm gonna get this clueless kid out of my house!  The bacon is just really the straw that is breaking my back.

As I was steaming, I thought what can I do to get my point across to this boy. Should I take his food and eat half of it so that he can see how it feels?  What should I do? He has got to learn. I have to be firm.  I decided that the consequence for his actions was that I refused to take him to the camera store after therapy that afternoon.

He tried his best to muster up a meltdown. I told him, "Go ahead and have it. I don't care.  But if you don't get your shit together in the next half-hour, I will not be taking you to therapy either. I will just cancel or call your father and ask him to take you."
NO!!! Not dad!

Slowly he pulled it together. He apologized again and again, which I really didn't buy.  It felt like a manipulation to get me to change my mind about the camera store.

When we finally got in the car to go to therapy, he had reconciled that we would not be stopping.  He ended up offering to take me to lunch --to a sit-down restaurant.  I mean, as in actually paying for my lunch, which he has NEVER done.

Quite frankly, I told him I would think about it. I really didn't know if I wanted to sit down and have  meal with him. I was just so disgusted, I thought I might gag over lunch.  At the same time, I could really use a glass of wine to calm my fried nerves.

While he was in therapy, I decided to accept his invitation. We went to the Cheesecake Factory. I ordered my wine. He asked to use my laptop to look something up, which meant I didn't have to listen to him perseverate. It was perfect! Until my phone started ringing over, and over and over again. 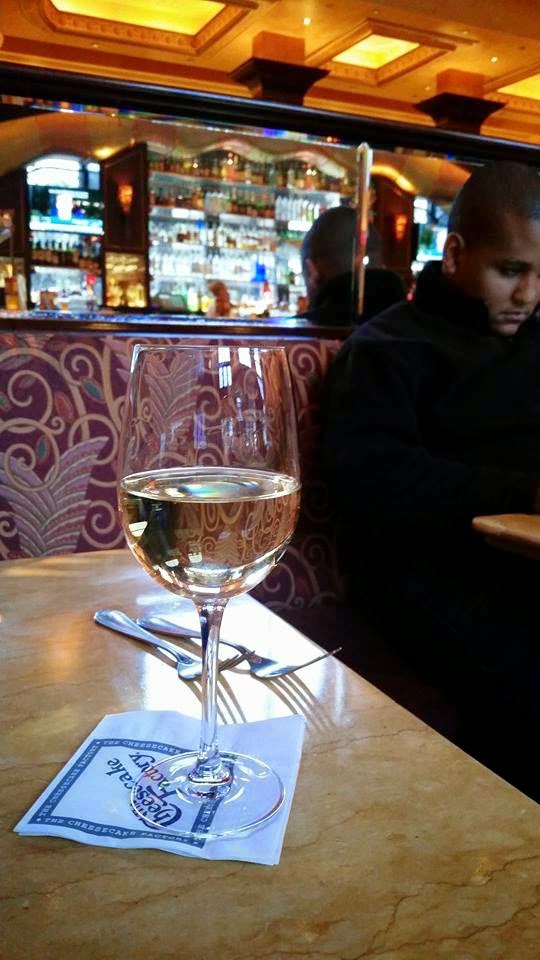 My mom called. Blue called. My husband called. My neighbor called. With everyone calling I figured there was some crisis and I better answer.  Mom wanted to tell me that the smoke detectors were going off.  My husband was gone and she couldn't reach him. Blue wanted to ask me to bring him something to eat. So NOT happening. My neighbor was having what she thought was either a panic attack or a heart attack and wanted me to check on her boys if she ended up in the hospital.

I told mom to send Blue next door to a neighbor to help with the smoke detectors. I talked my neighbor down to a calm state where she decided, she just might be o.k. But of course, I would check on her boys if need be.

After that, I sent Red next door to Barnes and Noble and ordered a second glass of wine! I sat there alone, and tried to decompress a bit.

On the way home, we stopped by to check on my neighbor.  Luckily for her, she was resting and not up cooking for her boys.  Otherwise, I may have throttled her and given her that heart attack.

I came home and crawled directly into bed.  Less than 5 minutes later, Blue came into my room screaming because his brother was singing in the shower.  I screamed louder than him. Sometimes, you just have to out-meltdown your kid.  I also added in a few expletives. *Warning, this could turn out badly, but in the moment, it felt like a chance worth taking.

"Do you want me to jump out of that fucking window? Well, you better get out of here and leave me alone!"

After an episode of the Beverly Hills Housewives, my nerves calmed a bit and I felt horrible about what I said to Blue.  I apologized this morning.

These are the confessions of a depressed, lunatic mom.

Just one more thing, although I am pretty severely depressed these days, I want you all to know that I never consider hurting myself or others.  I do sometimes think about slapping Red silly.  Though I know it wouldn't do any good, other than making me feel a little better.  (That's humor for you literal people.)

Posted by Karen Wesley Writes at 9:02 AM