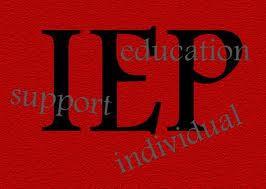 This week I had not one but two I.E.P. meetings to attend...one for each of my boys.  The two meetings could not have been more different, just like my two very different boys who are both on the autism spectrum.  These two boys being raised in the same environment, by the same two parents are as different as black and white, night and day, fire and water.  They may have some things in common ...but their mindset and belief systems are on opposite ends of the spectrum.

First up was Red's meeting.  He is 17 years- old, in his junior year of high school.  The goal of this meeting is to discuss goals to get him through graduation.  We also discussed transitioning him out of the high-school setting as soon as possible.  Not only do we want to get him off of the campus soon, per my request and his doctors suggestion, we are actually cutting the length of his days down immediately.  The accommodation puts him on a 3/4 day schedule, in order to cut down on some of the unstructured time in the hallways, and lunchroom.  These seem to be the times that cause him additional stress and it is when he gets into the most trouble.  He gets frustrated with peers when things don't go as he thinks they should. Social issues during these times seem to make him completely lose focus in the classroom setting.  He ends up getting in-school suspension and dealing with clueless Assistant Principles for discipline which by the way,  is never productive.

I requested that a representative from the district's special education department attend our meeting, primarily because of the issues we have been having with school administration and the way they have been attempting to handle disciplinary measures. They seem to exacerbate his issues, rather than making them better.  They want him to sign these bullshit agreements to not talk to certain students.  A couple of weeks ago, I had to stop him from signing such an agreement.  I literally burst into the A.P.'s office just as Red was about to go over the moon with anger, which would end up turning to rage in our home environment.  Of course, the assistant principal couldn't give a shit about that!

I followed up with an e-mail documenting that in no uncertain terms, is Red to sit down with any Assistant Principle or Administrator and sign documents without my presence in the future. What happens is Red turns around and perseverates on the document itself, the Assistant Principal, and how unfair it is,  rather than focusing on the behavior that caused him the problem in the first place.  Thus creating more negative behaviors and less focus on education.

Admittedly, part of the problem is a lack of respect on Red's behalf.  He does not seem to recognize or care about the authority of Vice Principals.  He seems to see them as an annoyance.  He has no problem marching right up to them to tell them how he feels about something, not realizing that he is creating a  more antagonistic environment for himself.  A few days of in-school suspension after cursing at one of the AP's or a peer, does not seem to change any of the behaviors.  Yet,  he seems to realize that's all they've got.  They can't really hurt him.  This is not painful enough to deter the behavior.

On the other hand, he totally respects the authority of his special education team of teachers because he knows they really care about him.  They are on his side,  in his corner ...even when he is having a bad day.  He also respects the authority of the campus Resource Police Officer.  First of all, the officer has taken the time to get to know him, and will give him cool down techniques, instead of antagonizing him when he's already upset.  Red also has enough sense to realize that getting a ticket for disturbing the peace, verbal assault, or possibly going to jail for destroying school property ...is definitely not a consequence that he wants!


We start the I.E.P. meeting with Red in the room, discussing his feelings about his current school year, and what he feels he needs as far as support for the following school year.  He is mostly talking about social issues...very little to do with academics or goals for his future.  He just wants to get out of there.  High school is pretty much an exercise in torture for him.  Although, he has a lot of positives in his day, and he has come so far, he still has a tendency to focus on the negatives.

One of the biggest positives is his work with students with more severe disabilities.   In fact, as we were  walking down the hallway before his meeting, he sees some of his special friends in wheel-chairs,  or those who don't communicate much verbally.  He goes up to them, gives them a huge hug, a smile and introduces them to us.  He actually ends up leaving his meeting early to go on a field trip with these students.

We set up his schedule for next year.  He will complete all high-school credits necessary for graduation by January.  He will also only be on campus half-days.  Hopefully, he will be employed the other half of the day.  He will also be involved in the 18 Plus social skills program that the district offers.  The last semester of school will he will be completely in 18 Plus services.  He will then walk the stage with his peers in June to receive his diploma.

Now I have the joys, of working on other transition issues for him.  We will need to file for guardianship before he turns 18.  I just do not see him being responsible enough to make financial and/or medical decisions for himself at the age of 18.  For example recently, when we received his lab results telling us that he needs to watch the saturated fat content of his diet, he tells me that's ridiculous! Yes son...the scientific, medical lab results are ridiculous!  It's a conspiracy even.  The idea of changing his diet is not something he wants to face.  Changes period, are not the friend of many people on the spectrum.  The thought of change causes anxiety and for Red an automatic answer of -NO!

I will also be applying for Social Security Disability before he turns 18 in hopes that he can start receiving benefits once he turns of age.  That should help with some of the expenses of college or receiving some professional training, so that hopefully someday, he can become independent and get the heck out of my house!

Although I walked into this meeting somewhat nervous and ready for a fight, it went really well.  On the way out the Special Education District Representative gave my husband her name and phone number and asked us to call her anytime if we were having difficulty with the high-school administration.  She also stopped by the A.P.'s office and had a chat with him to express our concerns.

Editorial Note: 3/4 or half-days is a possibility as an accommodation depending on your child's circumstances.  My son is on modified curriculum, which makes it much more feasible.  Otherwise, it may extend the period of time in which they complete courses required for graduation.  Ask your doctor or therapist if you think this is something that would truly benefit your child.