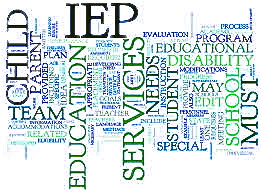 Blue ran his entire I.E.P. meeting!  The kid is a freakin' rock star!  In the beginning he made all of the introductions.  He then followed the pre-planned agenda and fully participated in the plan for his transition into high-school.

Like I said in Part One of this post ...the difference between Blue and Red is like the difference between night and day!  Not only does he have a road map for his transition into high school ...he has a plan for college and graduate school.  He stated during this meeting that he wants to become an Industrial Engineer!  Hell-looo!  This profession requires a minimum of a Bachelors Degree, however he would like to get a Master's Degree as well.  Then he says, "If I'm really lucky...I wouldn't mind getting a PhD."

He tells us all how he felt about his progress in the past year and followed up by asking me how I felt about it.  He then asked me what my concerns were. I told him that I think he has made a great deal of progress this year.  He has grown and matured.  I am very proud of the self-advocacy skills that he has developed.  My biggest concern is his level of anxiety and stress at the end of the day. He is so wound up by the time he gets home, I see a different kid than his teachers see at school.  I see meltdowns and falling apart over homework.  Some days, he is so worn out from making it through the school day that he has nothing left to give at night - especially, for 2 or 3 hours worth of homework.

He then goes around the room, asking the same question of his Language Arts teacher who is in attendance, his Special Education tracking teacher, and the School Psychologist.  After everyone gave their reports,  he asked his Special Ed teacher what his other teachers (who were not in attendance) thought about his progress this year.

The reports from all of the teachers were glowing -even from the Pre-AP Math teacher from hell.  He has no love for her ...and because she comes across with a very flat affect, and is not warm and fuzzy by any means, he thinks that she doesn't like him.  Not only that, not to long ago, she made an attempt not to give him one of his accommodations (extra-time).  He had to advocate for himself and go above her head to make it happen.  He didn't appreciate that at all!  I celebrated the fact that this boy who was afraid of his own shadow in 6th grade, is now standing up to a teacher who was trying to make him feel bad about getting the accommodations that he is entitled to by a legal document.  Hah! Take that!

His Math Applications teacher (who helps with math practice and techniques) also gave a wonderful report,   encouraging Blue to please come and see him one on one for tutorials more often, because he "loves to see the way that his mind works."

Whatever kind of math they are doing at this point, actually requires a lot of creative thinking...outside of the box.  Where it's all about how you find the answer and showing your work, rather than the actual answer itself.  I'm glad he doesn't need my help with this!  I am clueless when it comes to Algebra and beyond.

I took special note that his History/Social Studies teacher said, "He is a brilliant kid with a heart of gold." Be still my heart.  I had to remind him of this as soon as we got home that afternoon when he started in on the negative self-talk. Woe is me.  I'm such a horrible person.
.
The most negative thing that any teacher had to say was that, "He doesn't seem to give himself credit for being such an incredible student.  It's hard to watch him struggle internally when he is actually doing so well."

We talked about his schedule for next year.  He will continue with AP Geometry, Spanish 2, and AP Human Geography.  He had some apprehension about taking AP Language Arts because of the novels that will be assigned.  Reading and interpreting long works is not his strong suit.  Although, he scored commended on state testing in reading, the passages read in a state test are short.

His Pre-Ap Language Arts teacher  was there to cheerlead him --recommending that he stick with AP Language Arts in high school.  She basically told him, there will be a lot of knuckle-heads in regular Language Arts and he will become exasperated with them.  The students in AP are more serious-minded like Blue.  So, it's kind of a trade off.  You could have the easier class, but he would be trading it for the stress of dealing with kids who are loud and playing around in class. She was thrilled when he decided to give it a try.

I requested the presence of the Special Education Lead/Counselor from the high school to attend the meeting.  She also brought along one of the math teachers who also works with the local community college in the office of Students with Disabilities.  She was able to inform us all of the types of accommodations that will be available to him in college, so that we can structure his accommodations in high school along the same lines.


Most of these accommodations Blue actually asked for himself.  I am so proud of the fact that he knows exactly what he needs in order to be successful.

The last thing I fought for was an OT Evaluation for Blue.  Red is working with a wonderful Occupational Therapist at the high school who has gone above and beyond to help him with so many ADL's (activities for daily living).

Blue needs help with emotional and stress regulation.  I think that he needs a way to release some of his stress throughout the school day so that he doesn't come home so wound up.  An assessment will look at his strengths and weaknesses.  Therapy can include strengthening cognitive skills such as memory, following directions and paying attention to detail.  It will also assess his physical skills like coordination, strength and endurance.  Blue also has still not mastered tying his own shoes.  He can do advanced math ...but can't tie his shoes.  An Occupational Therapist should be able to help him with that.  I have tried everything I know how to.  He just gets frustrated and gives up.  (And of course, it's all my fault!)

The middle school I.E.P. Coordinator tried to give me this song and dance about him not really needing the evaluation. Another teacher spoke up and said that Occupational Therapy is usually only for physical issues.  They said the reason that Red receives services is because of how his pencil grip slows him down in writing.  Um...I don't think so.  It's so much more than that.

The bottom line is that we walked away with my requested evaluation.  Before the meeting, I called Blue's tracking teacher to find out about the possibility of getting one.  Immediately,  she called the Occupational Therapist who would do the evaluation.  She agreed to do it ...no questions asked.

It never ceases to amaze me how you can sit down at these meetings and people can try to block services that are available to your child.  They give you that blank look like, what are you talking about lady? We don't do that.  They seldom come up front and offer all accommodations and services that are available.  It's like the policy is, 'Don't know...don't tell.  Instead of, 'Whatever we can do to help.'

All  in all ...I would say that both meetings went very well.  They were completely different meetings, for completely different brothers on the autism spectrum.  We walked away with everything that I feel that both of them will need for the coming year.  But if not, you can bet your bottom, we will be sitting down at the beginning of the next school year to make any necessary adjustments.

Here's to kicking ass and taking names and getting your child what he needs and deserves! Cheers!
Posted by Karen Wesley Writes at 10:45 AM