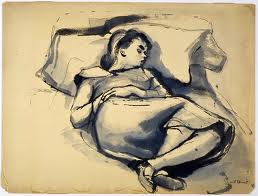 There's nothing better than being awakened from a pleasant slumber by a full on meltdown at midnight.

Blue bursts through the door, "Mom! Can you please tell Red to stop singing?!"

Really? Is this really happening?


I am sleeping.  I beg him to please to talk to his father, who is awake!
A few minutes later, he's back, "Dad won't help."
Really? Really?  I am pissed!  I have been awakened 3 times now in the past hour!
When they first got home from the basketball game --the one that Red did not want to go to, by the way, he came into my room wanting to tell me all about the good time he had.
Hello! I am sleeping!  Tell me tomorrow.
Does he leave? No! My television is still on which encourages him to sit down.
I turn it off and ask him  again to please leave my room  ...three times before it finally clicks.
A few minutes later Blue is in my room to say ...I don't know --hello or something.  I don't really know or care.  I am trying to sleep.  He gets the hint much quicker and leaves the room.

Now this  --Can you tell Red to stop singing?

I lost it! I get up I'm yelling at everyone.  I yell at Red to stop singing.  I yell at hubs because he didn't get his ass up off the couch to handle the situation. I yell at Blue to go to bed and get over it. I am cursing them all under my breath.  I go back to my room and slam my door!

Next thing I know Blue's door is back open...he's yelling, "There is a mosquito in my room!"
Jesus help me!

Dad finally gets up off the couch to handle things ...which means yelling at Blue, "Get in the bed now!" Not listening to what he is trying to say about the mosquito. Before I know anything Blue is in full melt-down.  Yelling, screaming and yes...even cursing.

So much for going back to sleep.  I catapult back across the family room, passed dad damn near knocking him over --and he's a big guy. Thanks so much for handling it by making it worse.

Blue is trying to call the 911 to get him out of this house.  I grab him, hugging him, telling him to take some deep breaths and just calm down.  I don't allow any talking just breathing --cooling off.

When he is finally calm enough to get undressed, I hugged him and told him not to think, just breathe and try to get to sleep.

Everyone goes back to their quarters...dad feeling crushed and defeated returns to the couch downstairs, Red to his room and me to mine.  The deep slumber is over.  I am wide awake.  Adrenaline is pumping through me.  I lay awake thinking about what just happened.

In the heat of the moment ...I wasn't thinking about was the fact that Blue had been gone for more than 24 hours.  He spent the night with his friends.  Got up early, hung out with them and played all day.  Then Dad picked him and his friends up to go to this basketball game.

The initial trigger to this meltdown was his brother singing as he was trying to relax and get ready for bed.  The underlying trigger was pure exhaustion.  It you dig down underneath the exhaustion, there was also little bit of a let down coming back home after all of that fun.  It's like when he was younger and we went on vacation to spend time with family, coming back home to reality made him sad.  Heck ...it made me sad too.  In these adolescent years, sadness has turned into anger and rage.

At home there are the annoying parents always telling him what to do and what not to do.  There's the annoying brother who loves to sing and script dialog from movies and television shows.  Then there is this intense need to have complete control over his environment and the inflexibility to adjust in order to acclimate to an environment that is less than perfect.

I lost it and yelled at everyone.  I lay in bed feeling bad about that.  I had yelled at my husband in front of everyone and then he ended up taking the brunt of Blue's meltdown.  I know how sensitive he is.  He usually takes the things they say and do during meltdowns personally.  I know he is thinking, I just took these assholes to a basketball game and now they are at home fighting, and end up yelling, screaming and cursing.  They are so ungrateful!  He isn't thinking about Blue is just being overwhelmed and exhausted.

I've been told in the middle of a meltdown, "I HATE you!"  I know that they love me...they are just angry, seeing red and not thinking clearly.  The boys have never get physically aggressive with me during a meltdown.  Of course, I don't back them into a corner in the middle of it.  Sometimes I walk away.  Other times, I may just give them a hug or try talking to them gently.  Talking never works.   When they are getting to out of hand, and refuse to leave an area, their dad will come to my rescue, so to speak.  He doesn't like what he feels is disrespect coming from these boys towards me.  He is my knight. There is something about them all being these alpha males who can't back down when emotions are high that can make things get out of hand and get really ugly.

I spent hours awake feeling bad for the part I played in this episode.  I felt bad for all parties but was able to piece together where the breakdowns happened in hopes to avoid them all the next time. Hubby and I talked in the wee hours of the night when he finally came to bed about exactly what happened and what we can try to do the next time.  I try to reassure him that he is an awesome dad, and he has to know that a good part of what is going on is simply autism and adolescence.  It's not personal.