Editorial Note: This little gem was originally published two years ago when Red was in 9th grade. He is now in 11th.


"Do you ever wish your life was a television movie and you could just turn the channel?" 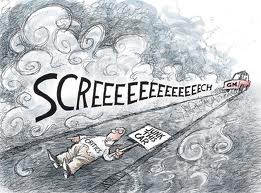 It is a typical morning after a night from hell.  Red -slow poking out of bed, followed by a short nap on the kitchen table after breakfast. I resist the fight  -just too tired from the rant the night before. I go sit in my car and wait until he decides to join me.

We get to school and he pulls the same old okie-doke...I don't want to go in nonsense.  Just get out of the freakin' car for Gods sake!

"I need to get Harry to the groomer. I've already missed my Zumba class. Can you please get out of the car?" I ask as nicely as I can muster.

He sits and sits...and I do not like it, not one little bit.  I get out of the car with the dog.  I do not want to be an audience for him.  I can not leave the dog in the car for Red to play with.  Harry and I walk through the school doors.  I say hello to the Receptionist.  Dogs are not allowed on campus.  She doesn't even bat an eye.  She is used to our morning circus act.

Red remains in the car watching me through the window.  I head toward the Assistant Principals office.  I stop short when I notice a little alcove where I can hide.  (Yes...I said hide).  I can peak out of another window from here.  I see that Red has exited the car.  I go back into my corner.  I watch as he marches right past me without turning to look back in my direction.  As he turns the corner, I walk quickly out the front door.  Before I get to my car...I notice that he is now walking behind me.  (No -he didn't just go on to class like a normal person.)  I hightail it to the car, lock the doors and burn rubber through the parking lot laughing madly, hysterically all the way like an evil character in a cartoon.

This absurdity is called my life.   I swear we should have our own reality show.  America would never believe it.

Note: Things have improved a great deal since I originally posted this.  Red now gets to school on time by riding the bus...most days.  I do however still have margarita therapy as often as I possibly can.