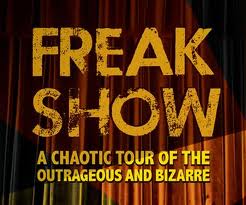 "I thought everything was going great until I got dragged back into this Freak Show!"  ~The Avengers

This is the line Red said to me this morning when I woke him up for school.  He is still angry, sad and disappointed that his friend ...someone who he considers to be one of his best friends, un-friended him on Facebook last night.

The thing is ...the kid has Aspergers.  Red looks up to him and thinks he has this perfect life.  Red sees him as being popular.  Why? Because a lot of people speak to him every day.  The reality is that he has grown up as the son of a Pastor in this community.  Therefore, a lot of people know him.  What does that mean really? A lot of people reach out to him...some of it real...some of it superficial. A lot of people have high expectations for his behavior and he is often being watched, or has responsibilities simply because of who his parents are. Could that overwhelm him at times?  He's also taking all regular education classes, and maybe even some advanced classes.  What does that mean really? Perhaps, he is stressed out by the level of expectation or self-imposed need for perfection.  He has a girlfriend, which in Red's eyes is the key to happiness.  What does it mean really?  That's another relationship...another set of expectations...another layer of drama, perhaps. We don't know because we're not inside of his head.

We do know that he has Aspergers.  That he sees the world differently.  Things may seem bigger than they really are to him.  His view of things could be skewed.  He could have a great deal of anxiety.  Who knows?  Everyone is different!  Right down to the two brothers who live here in our house.  They are very, very different.  In fact, Blue's personality may be somewhat like Red's friend.

Blue is ridden with anxiety and misinterpretation of social cues.  A teacher busts him surfing on the internet when he is supposed to be reading a novel.  In his mind, she now thinks that he is the most horrible person ever! She hates him and wants to have him killed.  A bit extreme you think?  Yeah...but that's what he said to me just yesterday.

The truth is Red can be high drama.  Because of his social inequities, he gets into lots of situations with peers. He has lots of high and low emotions.  His friend probably feels a need to rescue him ...a lot.  That may be too stressful for him.  I don't know.  I can only guess.  I know that he is basically a good kid and I don't think he would do anything to hurt Red purposefully.  He is probably just drowning and trying to save himself.  Nevertheless, for Red ...this sucks.  Which means for me ...it also sucks.  As his mother of course, I feel his pain even though I put up the good front and try to paint the sunny side picture for him.

I had just talked Red down off of the bridge of self-hatred and anger about other situations at school.  I think I almost convinced him that my plan to have him engaged in positive scenarios and situations is to help him, not to treat him like a baby.

I tell him how he has been swimming in a big pool everyday,  when he walks through that high school trying to get people to notice him, hoping to find acceptance into a group of people who could care less about him.  How he is using every muscle in his body to swim in that pool and yet, he is not getting the results that he wants from his actions.  He is frustrated, and becoming angry because what he is doing IS NOT  WORKING!  It's like banging your head up against the wall.  I am trying to get him to change his focus so that he will not feel so frustrated.

I try to convince him that what he is looking for ...is not in that big pool.  Skulking around through hallways is not going to find you that good friend or special relationship.  That is going to be found in a smaller group, perhaps in a class or maybe the workplace.  Maybe he will find it at church.  He certainly isn't going to find it walking around through hallways, putting on a facade ...a fake personality, just so that he will be socially accepted.

"If you do find a girl and you're not being yourself...after a while...the truth of who you are will come to light.  And then what do you have? Nothing ...except the drama of breaking up with that girl. Be yourself and when you relax into yourself and love exactly who you are...the right relationships will come."

He softens his stance a bit as if he gets it --for the moment.  Until late that night, when he is supposed to be in bed.  I hear footsteps above me.  Why is he still awake? Well,  he's on Facebook and he finds out that he has been unfriended.  I'm really hating that he's even on Facebook at this point.

This morning as I drop him off ...I ask him, "How do you think you should handle this situation today?"
"Maybe I should wait until church tonight and talk about it there."
"That's a brilliant idea son.  That's exactly what you should do."

I encourage him to realize that whatever his friend is going through, please remember ...it's not all about him.  "Try to be supportive.  You can let him know that your feelings are hurt without cursing him out. That would only damage your relationship more."

I can only pray that he will keep all of this in mind throughout his school day.

The social world of high school feels like a gigantic cesspool that he is swimming in.  It is like this for so many kids ...or as he calls it  --a real Freak Show.

Posted by Karen Wesley Writes at 9:15 AM