Life in a Box

I had a weekend of freedom and have spent the past two days paying for it.

Red participated in a retreat with his church.  He spent the nights in a host home with other high school boys.  They traveled to and from the church for worship and socialization and  then spent Saturday doing a service project.  They made lunches for the homeless and then went into downtown Austin to meet them and pass out lunches to them.

Tears filled my eyes on Saturday night when he called me to tell me about what he had done that day.  He was absolutely beaming about helping these people.  "I went up to this guy who was living under the freeway.  I shook his hand and asked him where he was from.  He was from Michigan.  Mom! It was so awesome to help these people!"  He felt really good and proud of himself.  I was so proud and happy for him.  I thought to myself, maybe this is his calling.  Maybe the way to fill up his emptiness is by serving others.

For me, it was a weekend of peace.  There was no, 'Put the dog down! Stop fighting with your brother!  Enough with the singing already.'
There was no one knocking on my door early in the morning or late at night wanting to talk.
I thought about him often, wondering what he was doing at certain moments of the day.  Is he talking their heads off and driving everyone crazy?
I quickly dismissed the thought ...just so glad to have my own slice of quiet time.

He spent most of Sunday afternoon when he got home sleeping.  I had to wake him up to eat dinner, worrying that he may not be able to get back to sleep for the night.  He does. He passes out without me having to ask him to go to bed.
Yay me!  More rest! Let's pain in the ass.
That is, until Monday morning when it is time for school.

Of course, he does not want to get up.  He makes it to school however, shortly after arriving he got into a major argument with his special education teacher.  He did not want to follow directions.

I end up picking him up from school early.  Mama bear instinct told me ...the day wasn't going to get any better.  I couldn't focus on anything anyway.  I kept wondering when the phone would ring.  What did he do now to dig himself in deeper.  He had run out of one of his medications (my fault I guess).  I figured that he was still really tired from the weekend.

It turns out that he slept in a chair at his host's home because he thought it would be more comfortable than the floor.  Which means, he probably got little to no sound sleep for the 2 and a half days he was there.

You don't have to worry about having the latest electronics.
There's no HDTV,  computers or cell phones in a box.
No worries about finding a girlfriend, unless she wants to live with you in the box.
You don't have to pay rent or a car note.
You don't have to cook for yourself.
You can depend on the kindness of strangers to come down to your box and hopefully, give you lunch.
You know...just like you did for those nice homeless people this weekend in downtown Austin.

Tonight we have a PCP (Person Centered Planning) meeting scheduled, where all of his support system shows up here at our house to help him set goals and plans for his life.  All of these people show up on their own time, they are not getting paid.  His friend and ex Pastor comes. Last month his Video Tech mentor came.  This time three of his teachers are scheduled to come.  Also, the top Transition Coordinator for our school district is his Facilitator. 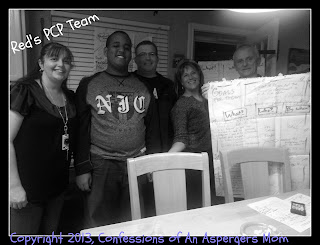 He plans this meeting, sets the schedule and invites those that he wants to help him.  He really loves the attention that he gets during this process.

This morning, he sits at the kitchen table complaining.  "I hate school!  If it weren't for you making me go...I wouldn't!"

He is already an hour late.  I ask him, "So you don't want to go to school? Would you like me to cancel this evening's meeting?  People who live in a box don't need to set goals.  I can just call everyone and tell them life is too hard. You don't want to go to school. You've given up.  They don't need to waste their time coming over here tonight."

He made it to school ...finally.  Once he was there, I received this text message ...

"I apologize for my behavior this morning.  I was really tired and cranky. :/ I may need to start taking 5 hour energy in the mornings."

I missed Yoga today since I spent a good part of my morning getting him to school.  By the time I wrapped dropping him off and speaking with the school Psychologist (making plans for helping him get to school on time and make the right choices once he gets there for his 17 year-old self)...my free-time for the day is half-way over.  By free time, I mean the opportunity to exercise, write, grocery shop and get my gray hair dyed.  Yes...it's getting more gray by the minute.  Hmm...I wonder why?

I will also preparing the house and snacks for his meeting this evening.

It turns out he doesn't want to live his life in a box after all.
Posted by Karen Wesley Writes at 11:21 AM