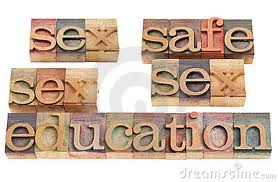 It may be blasphemous to talk about a relationship with God and sex in the same blog post...but this is the reality of my life raising teens with Aspergers.  At seventeen that uncomfortable conversation about sex is bound to come up ...no matter how much I would like to avoid it.  This time it was actually a reasonable conversation, I think only because of his new found desire to be a "hardcore Christian" as he calls it.

I have to say, that the closer he gets in his relationship with God, the more clear his thinking seems to become.  That...along with the therapy we're paying an arm and a leg for.  That's right, instead of us helping him by a car at 17...we are paying cash for a therapist who specializes in working with Aspies on sexual and relationship issues.

So there's a girl...who shows interest in Red.  She has been showing interest for quite some time, but he didn't pay attention to it, as he was too busy focusing on girls who did not even know he was alive.  Now that he has come down to reality, this seemingly nice young lady has caught his interest as well.  Although, he is taking things surprisingly slow.  He is developing a friendship with her.  He is slowly ...very slowly trying to get to know her.  It's kind of strange to see him with this approach.

He tells me, "She deserves respect.  Not just some guy who is trying to have sex with her.  I'm trying to show her respect and get to know her."  Wait a minute...who is this kid?

Later on we're having lunch he says, "I really want to take my time.  I don't want to have sex because I know it's a sin, but just in case it happens...would you be mad?" Ugh! Punch to the gut!  I am not ready for this...and neither is he, despite what his hormones and teenage urges tell him.

I go into the whole explanation of the emotions that come along with sex, which he has no clue about.  "What do you mean?  Like I'm gonna cry or something?"

When we talk about double protection he asks, "What do you mean? Like wear 2 condoms?"
Woo hoo!  We are so not ready here.

We talk about safety, and sexually transmitted disease, pregnancy, protection for both parties (birth control and condoms) and still...there are no 100% guarantees.

Fortunately, he knows a young man at school whose girlfriend already has a baby.  Of course, the young man he has no money or life skills to give this child.  Red can see this...and says he doesn't want to end up in that situation.  Yeah...but isn't that what they all say?

We talk about abstinence being the best policy...that sex is designed for people who are ready for that kind of emotional commitment.  It's for people who can afford to pay the consequences if a pregnancy comes out of the situation.

He tells me honestly he just wants to know what it's like to kiss someone, give them a hug, and have them hug him back.  I am realistic and tell him how one thing can lead to another.  It's kind of like how he feels about cursing.  He swears because of his Christianity,  that he wants to stop cursing.  But everyday there he goes! Oops!  It just slipped out.  It just happened.  I couldn't help it!  The next thing you know...he will be saying the same thing about kissing.  Oops! It just happened.  We were just kissing naked and I slipped and fell into her vagina!

He is getting closer in his relationship to God.  He is talking and listening to his youth Pastor and at least has in his mind...that he wants to do the right thing.  He feels free enough to talk to me.  He periodically talks to his dad, and to his older brother (who can also be clueless when it comes to sex and doing the right thing.  Oy...that's a whole other blog post!)  But at least he's talking and thinking out loud.  So eventually, when and if  anything happens...we will know about it, and hopefully we can help him be prepared.

I have to keep reminding myself, he is 17.  The curiosity about sex is at it's peak right now.  At least we can talk about it...even if afterwards I need a very strong drink.
Posted by Karen Wesley Writes at 7:45 AM