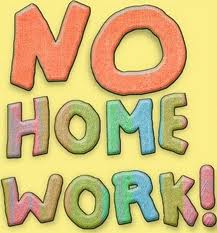 Who likes homework really? None of us.  Personally, I hate it. If feels like teachers are punishing me for having to put up with my kids all day.  For Red it has never been about what he knows how to do.  It's about what I have the patience to HELP him do.  It's about how much of a headache I want for the night.

I've heard these questions thousands of times from both of the boys over the years.  I feel their pain...literally.

Blue (13) really does see the point.  He realizes it's about practicing what you have learned.  Sometimes it's an opportunity to finish what you weren't able to finish in class.  He goes through great lengths to get his done.  He will stay after school for tutorials and even go to the library or to Starbucks to work in a less distracting environment than this house with his brothers shenanigans.   It doesn't mean that homework doesn't cause him stress and that sometimes...he just doesn't feel like doing it.  He gets overwhelmed.   It has even caused him meltdowns.  After holding it all together at school, sometimes he wants and needs to come home and just chill...have some downtime.

Red is a different animal altogether.  As he reaches the finish line of high-school he is starting to get a little more than panicked about his future.  You see, he wants to be successful.  He wants to be "rich"even.  He wants to be able to buy all of the "things" that he thinks will make him happy.  However, he does not want to come out of his comfort zone or push himself to do things that he just doesn't want to do.

He says he wants to go to college, but only because he thinks that will yield him the best return on making money faster...and he wants everything fast! Unfortunately, he has never been one for getting out of the comfort zone and doing things that he really just does not want to do.  He is only self-motivated when it comes to doing what he enjoys.  He can sit for hours and work on editing a video, but  he won't sit for 30 minutes to read a book for class unless someone is pointing a gun to his head.  He has taught himself how to use video editing software, but he can't or won't figure out how to do a research project for school.

He is on a minimum graduation plan, because of this fact.  Not because of his level of intelligence, but essentially because of his processing speed, which appears to be extra slow and because when he is sitting in a regular-ed classroom full of distractions, he can't focus and follow what's being taught, especially if he is just not interested.  It all sounds like garbly goo to him.  They may as well be speaking French.  He requires a smaller, more quiet environment with individual attention.  He does fine with his grades in a special education classroom.  He gets the work done and makes good grades.

Part of the issue is also that in the high-school environment, he seems to be extremely distracted by the social climate.  Why do all of these other boys have girlfriends? They all look like they're having so much fun, talking and laughing.  He doesn't know how to do that.  He feels left out.  It really kills him when he sees the couples holding hands and making out.  He takes all that garbage to class with him, which takes up space in his mind for actual learning.

The theme of our conversation on Monday, on our way to his therapist is about how panicked he is about going to college because he's not in regular classes and he gets so much support.  He doesn't do any homework.  How can he possibly get through college without the same level of support?  Well...son the truth is they don't hold your hand in college.  College is for people who are self-motivated enough to get through the subjects that they hate...in order to get to the classes that they love. It's sad for me to say...I don't see that for him.   I've asked him to challenge himself and take a few regular ed. classes...to bring assignments home to work on.  He did take regular science last year and was totally lost.  He refuses to do homework.  So there you have it.  They don't hold a gun to your head in college.  You either want to do it...or you don't.

I want both of them to have as many options as they possibly can.  He already has the social deficits of autism as a strike to make things more difficult for him.  The truth is, he is an African-American male...a minority, which can be another strike to make things more challenging on the road to success.  No matter how much this scares me as his mother, I have to remain positive with him.

I told him yesterday, "There is more than one road to success.  Everyone has their own path.  Stop comparing yourself to your friends and your peers.  They don't have the same gifts that you do. You can do anything you really want to do...if you are willing to work hard.  Aspergers does not limit you.  It just makes your path a little different."

I told him to investigate the video technical certification programs that his mentor sent him information about.  He may just have to get a job, or an apprenticeship to learn his craft and slowly move up and make more money.  His video tech mentor has already told him that he has a gift...a talent for editing which could get him a job as an assistant editor after high school.

Red is a very visual person.  I think what he needs is a visual road map leading towards his future.  We may have to work with his Person Centered Planner to create one.  The map may change with time and maturity.  In the end...if he keeps moving forward and working hard...it will lead him out of my house and to success.
Posted by Karen Wesley Writes at 12:43 PM