As a tribute to what many autism parents maybe be going through this morning after Hurricane Sandy, I am republishing this post.  It was originally posted in April,  2011.  Blue was still in the heart of his storm anxiety.  Here we are a year and 1/2 later.  He is nearly 14 years-old,  and that anxiety has mostly been alleviated.  Maturity, time, Abilify and facing those fears head on by actually being out in the middle of storm, all helped him to put the squash on what was once crippling storm anxiety.  I just want you all to know...there is always hope!

I get on Facebook this morning -all my Central Texas friends are happy because we got rain last night.  It cooled our temperatures a few degrees.  Our grass and trees appreciate the free water.   Blue is not happy with the rain.  I thought things were getting better with the anxiety over thunderstorms -no such luck. 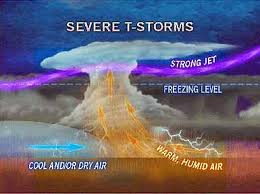 He checks the weather and radar with regularity.  If there is more than a 20% chance -he worries, especially if its overnight.  He doesn't want to be awakened by a loud clap of thunder and the house vibrating.  He wants to control his environment, especially when it's time to go to sleep.  He doesn't like loud sounds, and he certainly doesn't want to be surprised and awakened by one in the middle of the night.

Things are better since he's on a low dosage of Abilify -meaning he's not hiding out throughout the day when the sun is still shining.  But overnight -if there's a good chance of a storm -he camps out in the bathroom.  Loud fan blowing, layers of blankets and pillows, sleeping bag, Ipod, earplugs, earphones and a lamp for soft lighting.  He'd rather sleep next to a toilet than be awakened by a storm.  That is really sad.  One day we will look back on this and laugh --not today.

We have tried the whole ordering him to sleep in his bed -no matter what.  All that means is once we're asleep, he sneaks into the bathroom anyway.  His fear is very real to him.  No matter how logical we try to be in our explanation, "It's not going to hurt you.  Have you ever been hurt by a storm?  We are here...we will keep you safe.  We won't let anything bad happen to you."  It doesn't matter what we say. If I can't crawl into his head and flip a switch...it doesn't work.  He has to come out of this on his own.

Last night he sets up camp while there isn't a cloud in the sky, but the radar says there is a 40% chance that a storm is coming.  He comes into our bedroom around 12:30 a.m. and asks me if I will come in the bathroom with him if it starts.  There is nothing but a little wind at this point.  I beg him to go back to sleep and not worry.  I may as well have told him to fly around the room like a bird.

The thunder claps start around 4 a.m.  They are short lived, but the build up in waiting for it kept him awake most of the night.  As I write this, he's sleeping it off,  unable to go to school on time because he probably didn't go to sleep until 5 a.m.  He will not miss the entire day.  He refuses to get behind in his schoolwork.

For now I wait -until he wakes.  Thankfully -he will wake up to sunny skies, fresh green grass and blooming plants...not that he cares one damn bit.

Posted by Karen Wesley Writes at 7:36 AM