My Dog Has Aspergers


Harry is our now 5 year-old Maltese.  The longer Harry lives with us...I am convinced that he (like all of the other boys who live in this house) has a touch of Aspergers.

1. He interrupts my conversations.  If I have a friend over, or I'm on the phone, he yaps and tries to get all of the attention as if he is the most important person in the room.

2. He has no sense of personal space.  If I'm sitting down, he can't just sit accross from me or next to me, but he has to be touching some part of my body. Red has told me there's no such thing as personal space.  Harry apparently, feels the same way.

3. Everytime I pull out my laptop to type...he comes over, stands on two legs and puts his paws on the keyboard, as if to say, "What about me? Pat attention to me! Don't you know it's all about me all the time?"

4. As soon as I get busy doing something, like sitting down for breakfast or lunch, all of a sudden he needs to go potty.  He's like, Hello!...Focus  on me please.  I'm over here!  I need you right now! What you are doing is not as important as me.

That's the exact same thing Red says to me when he comes into my room and I'm watching a show or writing.  "Stop looking at that t.v. Look at me!" Even though he just came in to repeat something to me  that he's already said about 25 times that day.

5. Harry is impulsive. Even though he knows better than to run across the street -if he sees something or someone that he just has to talk to...off he goes. (Luckily we live on a quiet street.)  He comes back humbly, knowing he was wrong and that  he is in trouble.  You know the infamous, "I'm sorry." Like Red says when he knows he's going to do the exact same thing the next time.  That doesn't keep me from giving him a bop on the nose and a time out! 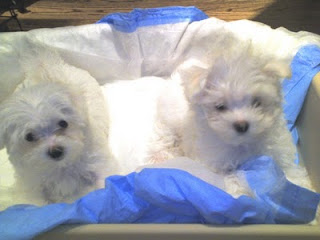 Harry and Oliver (brothers) from the same litter 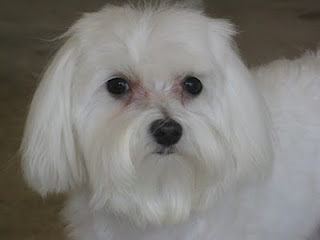 I don't mean to paint Aspergers with a broad stroke.  Every person with Aspergers is different right down to the two children I gave birth to.  I do see these traits in both of them, some more in one child than the other.  However, the essence of these traits can be found in both of them.  Maybe it's not them, maybe it's me. Maybe I have spoiled everyone in this house so much, that they all want my attention all of the time.  Maybe it's just the air we breath in this house, but probably not. 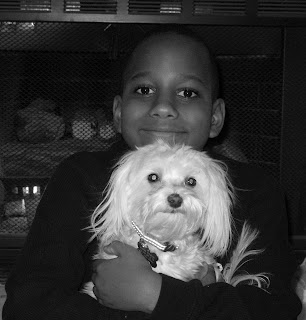 Aspergers or not...I love Harry, as I love my Aspergers boys.  The good thing about Harry is that he never gets mad at me.  He accepts discipline humbly. He is always happy to see me and sad to see me go.  Best of all -he's the only one in the house that doesn't talk back!

Editorial note: This was previously published here on "Confessions" a few years ago.  It still holds true today.  There is no such thing as personal space in this house! Right down to Harry sniffing at the door when I'm using the bathroom!