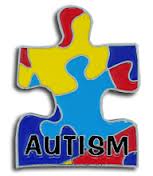 Blue is a lot like me.  He's a crusader.  He wants to help others...and by others I mean anyone OTHER than me...his mother.  Tomorrow he wants to get up in the morning and walk for Autism Speaks.  On a Saturday --at 8:30 a.m.  Now even me ...his autism-advocating, saving- the-world-mother, doesn't want to get up early on a Saturday morning to walk for anybody.  Me and early mornings just don't get along very well these days.  I mean we tolerate each other --kind of like being in a bad marriage. You know you have to be together, but we don't have to enjoy every minute of it.  Of course, like everything else in my life ...I will get up and walk to help teach my son the lesson of giving, and sacrificing for the greater good of the community. Yada yada yada.

During the carpool this morning...Blue is trying to convince his best friend to join him on the walk for Autism Speaks. If you follow this blog you may know that I drive a carpool with 3 middle school boys on the autism spectrum.  Now as much as I no longer like getting up early --I do enjoy the ride to school with Blue and his friends.  Their purity, innocence, honesty, bluntness and sense of humor are refreshing.  Usually at this age --everything is a secret.  You don't want your mom all up in your business.  But these boys talk as if I'm not even there, about girls, friends, video games ...whatever --with no edit button.

Blue and his friends are the very definition of spectrum ...they are very different.  Blue wants to know all there is to know about autism.  He wants to create awareness so that others understand it.  He will talk about being on the spectrum almost immediately after meeting someone.  You may remember he actually read an essay about it over the P.A. system at school last year called, "Freaks Geeks and Aspergers"
His best friend is somewhere in the middle of the spectrum.  At this point, he doesn't want much to do with autism.  He doesn't want to talk about it.  He doesn't necessarily want people to know he has it.  He definitely does not want it to define who he is.  He wants to slide under the radar, fit in as best he can and not be identified as the "kid with autism."  It is more than o.k. for him to feel this way.  This is his journey --his life and he is entitled to define it as he sees fit.
His twin brother is in another place on the spectrum.  He spends a lot of his time in his own universe and he's pretty damned happy right where he is. He is not all that aware of what other people think and I don't think he really cares.  When you think about it...what a great place to be -knowing and being happy with exactly who you are.
I love these boys as if they are my own.  They are lights in my life.

So here's the conversation....

"Do you want to walk with me tomorrow for Autism Speaks."
"No thanks.  I don't really like walking."
"Dude, come on! It's a walk to help kids with autism."
"Help them do what?"
"Help them get money to help with their autism.  That's what Autism Speaks does."
I stay out of the conversation just to see where it will go.
"I don't understand.  I'm confused.  What do they do?" asks his friend.

I think to myself...you're not he only one who doesn't really know what exactly what Autism Speaks does other than raise awareness, and fund research, which is important.  However, I would like to see some of that money raised get directly into the hands of families who are actually struggling with the high COSTS of autism for therapies, summer camps, etc.  Of course,  I'm not going to go down this road with the boys.  For once, I'm going to keep my 2 cents to myself.

We have been doing the walk for several years. Even Aspergers Dad is involved and is raising funds with his family and co-workers.

"Basically..they help kids like us,"Blue says.
"So you walk and you give them money and other people give them money...to walk?" His friend asks with genuine skepticism...trying to gather and process this in his mind.
"Yeah...something like that," says Blue.
"Um....If I'm going to raise the money for kids with autism...I think I'd rather keep it myself."
I laugh cynically to myself thinking ...the kid does have a point.

Here is the link if you would like to help us meet our goal: Walk For Autisms Speaks -Our Family Goal Page
Posted by Karen Wesley Writes at 5:30 PM