It's hard to believe that sixteen years ago...I gave birth to the most beautiful baby boy I have ever seen.  He was a perfect little blur as they whisked him away quickly because he wasn't breathing when they took him from my body.  It took them 5 minutes or so to work on him before we got an actual cry.  They only let me see him for a moment before they took his little 4 pound, 8 oz body into the ICU where he stayed for 5 days until they could see him actually gaining a little weight.  I couldn't wait to get him home, where the nurses could no longer tell me what to do with my own baby boy.  There was absolutely no fear in bringing him home to take care of him on my own.  I couldn't wait!

What I didn't realize is that I should have been in no hurry.   I would have a lifetime of years ahead of me.  My life would never be the same.  I would no longer rest on my own schedule, but on his.  In fact, I would almost completely loose who I am, so that I could help develop who he will be in this world. I would be in for the roller coaster ride of my life.  I became a mother...who would give up her own life in order to make his life better.  As I held that perfect baby in my arms...I had no idea really what being his mother would actually mean.

We perseverated over the birthday ALL WEEK LONG leading up to the big day.  He actually sent out an e-mail announcement to the entire family, reminding them that his 16th birthday is Sunday (you know in case they forgot or weren't thinking about it).  He tried very hard to act like it wasn't all about the gifts...at least he TRIED.  He also made an effort to graciously say thank you for what he did receive, even though it was mostly scripted.  (I know I'm supposed to say thank you and act all grateful...whatever that means, so that everyone won't be mad at me and they will give me more gifts in the future.)  I was glad to at least see him at least making the effort.

On this 16th birthday, Red opts out of the boring Six Flags trip that he likes to take every single year...mostly because he doesn't really have anyone to go with.  He only has one friend who actually likes Six Flags and roller coasters as much as he does.  Instead, he asked for a dinner party with the Aspergers Meetup group along with a couple of his other good friends.

So on Saturday night, we met at his 2nd favorite restaurant, Cheddars, because his first favorite (BJ's) is too expensive for a large group.  We had a great turn out and the boys all had a really good time.  It was so awesome to see Red smiling, genuinely happy because he was the center of attention.  This is a lifelong dream for him. 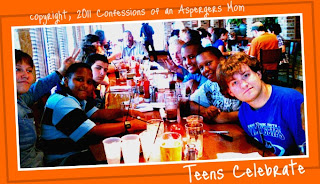 There were about 20 of us in total, parents all sitting on one end of the table while the boys sat conversing at the other end.  Most of the boys were all actually very social, which was good to see.  There were a lot of plain cheeseburgers ordered (no condiments of course).  Most them ordered double burgers and woofed them down in nothing flat. Hubby allowed them all to order whatever they wanted for dessert, which thrilled them all immensely. 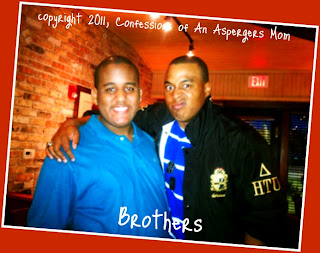 The creme de la creme for Red was his big brother showing up for the celebration.  The prodigal son whom we have not seen in months, though he only lives 10 minutes away,  did his brotherly duty, showing up in his Alpha-phi-Alpha fraternity jacket, fresh off of crossing over into the brotherhood.  Red was so proud to introduce him to all of his friends.  Slim Shady, sat down on the boys end of the table and actually engaged in conversation with all of the them.  I think that alone was the single, best gift.

On Sunday, his actual birthday, Mama slaved over a hot stove to prepare the traditional fried chicken, macaroni and cheese dinner.  This time it was accompanied by a spinach salad, which Red actually ate.  He is trying to be healthy so that he can loose a few pounds to be ready for the wrestling team that he hopes to join next month.  Mama topped off dinner with homemade white chocolate cookie bars with ice-cream.  We all sang happy birthday to him...even Harry our dog tried to get in on the celebration barking as we sang.  It was a very special day for a very special boy.  The difference is this time...he actually seemed grateful.

Posted by Karen Wesley Writes at 11:51 AM