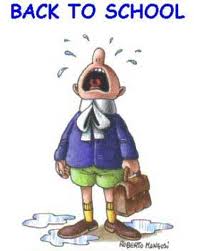 Back to school next week.  I am not ready.  Well...I'm ready for them to get out of my hair.  But I haven't done what it takes to make that happen.  Not a school supply has been bought...no new clothes or shoes.  I'm not even sure what school Red is going to.

I've been trying to just enjoy the quiet since he's off visiting his grandma.  He is not here to burst through my door at any given moment with a complaint, or to come in to bother the dog because he's bored.  Why do I have to repeat the same sentence 95 times a day to a 15 year-old boy?  "Leave the dog alone.  Put the dog down.  He does not want to be picked up.  He's resting."  None of that for 2 whole weeks.  I am so grateful for that.

Of course there is no such thing as total peace unless BOTH of them are gone or unless I leave...by myself.  Blue has cranked up his autism a couple of notches while his brother has been away.  He needs more time and attention.  He doesn't seem to want to be alone unless he's playing his driving game on his computer.  He bought this cool steering wheel/gas/break pedal thingy, so it really feels like he's driving.   This has also been a source of contention.  He gets really pissed when he crashes one of the cars in the game.  This is usually taken out on me...sometimes the dog.  Poor Harry...he becomes "that stupid dog" when Blue is in one of his moods.  Red's not here.  He has to be mad at somebody!  So he gives me a little extra dose of drama and attitude.  Only me...lucky me!  I'm the only one who gets to see this side of him.

Thank God for his friends!  He has been so blessed to get together with the twins, his friend Jake and another friend from school throughout the summer.  Last week he even went swimming with my friend and her daughter.  He just can not be in one place for too long.  He's always planning some kind of activity.  I think he gets that from me.  I get it from my Dad.  We are the go-go people.  Blue is the most social Aspie I know!

I got Blue's school schedule in the mail.  Nothing from Red's school -probably because I took him out of school the last few weeks because he was in the hospital.  I need to go jump through the bureaucratic hoops and officially re-enroll him, which I am not even sure if I want to.  I just got some information today on a private school nearby that works specifically with the high-functioning autism spectrum disorder population.  They go all the way through 12th grade.

So here we are a week away from school starting and I don't know which way I'm going to go.  Of course the private school costs. It's not crazy expensive, but it's not something that's in our budget either.  With the economy sucking eggs and all...things have been kind of tight around here.  Feel free to send me a donation.  Make all checks payable to the, "Keep Karen Sane Fund."

I am excited at just the shear possibility of having him in an environment where they "get him" and he can work to his potential and at his own pace...which would be the pace of an elderly tortoise.  The curriculum is web based, and he can move things around however he needs to.  In public school,  he uses up so much of his energy on the social components, stress and anxiety.  How can he possibly focus on learning? He was thoroughly fried by the end of school last year, hence the hospitalization.


He has done so much better over the summer as far as real-deal ugly meltdowns are concerned.  Of course, his stress level has been very low.  He hasn't had those huge social issues to worry about.  In fact, he has made a new friend that he connects very well with and he has made some other connections through our Aspergers Meetup Group.  He hasn't felt that total isolation that he felt most of the school year.  This is a prayer answered.

This private school would work with him on life skills and becoming independent.  It may just very well be worth the investment if we can move towards getting him out of our house eventually.  I want my freedom back! I may never get it completely, but I want him to be an independent young man, living at his maximum potential.

I hope we can figure out a way to pay for it.  Maybe I can see if they will do a two for one.  I could work there to get him a tuition discount!  You never know...

I've talked to Red on the phone the last two days.  He sounds so calm.  It's great to hear.  I pray that he comes home with that same degree of calmness.  Wouldn't that be great?  It will be a whirlwind of changing time zones and getting him reacclimated to going to bed and getting up early for school.  That should be fun.

Anyway...a zillion thoughts and things to do.  None of them add up to writing a blog post that has much rhyme or reason.  Instead, you get to see the discombobulated thoughts that are rambling through the mind of a neurotic mom.

Posted by Karen Wesley Writes at 8:20 AM