After yesterday's sad look at my reality, I feel obliged to share some laughter and smiles with you today.

My dear friend Elena from the Confessions Facebook Community  sent me this:
We're at a restaurant.  G3 (her 8 year old Aspie) holds up his glass and yells, "Refill!"  Mom says, "At least say please! I don't know what's happened to your manners?  You used to be so polite."
He says very matter-of-factly, "Life has changed me...that's what happened."

I take Blue and his friends to the YMCA this week so that they can swim and I can work out.  The boys (who also have autism) insist with their mother that they can not change at home.  They tell her, "You're not allowed to walk through the Y with your swimming trunks on.  You have to change there," and they are quite adamant about it.  I don't know where they got this idea, but whatever...no big deal.  Blue has his trunks on.  Twin number 1 has his stuff in his back pack.  Twin number 2, is carrying his few garments in his hands. 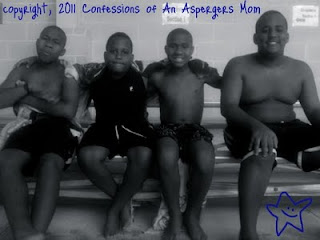 They change...I walk them over to the pool area and make sure they understand the pool rules at this particular Y.  They go off to swim.  I go off to run with the Black Eyed Peas.

After I catch my breath, I decide to go look for them. They are coming down the hallway also looking for me.  Twin 2 says, "I can't find my underwear!  I can't find my underwear! Please help me find my underwear!"  He is very loud.  Parents are sitting there watching their kids in gymnastics classes.  The other two boys, try to shush him.  They are mortified and snickering at the same time.  The parents are all looking at me like WTH?  I could care less.  I don't even bother to explain.  The truth is...I can't stop laughing...very quietly laughing.

I encourage the boys to trace their steps.  They go back to the pool deck, where the underwear are laying on the ground.  "Here they are! Here's my underwear!"  He picks them up and twirls them around for all of the world to see.  Discretion? What's that?

My friend Sharon from Mama'sTurnNow sent me this one:

I love these boys.  We are so blessed by their presence in Blue's life and for the laughter that their pure honesty brings.

Posted by Karen Wesley Writes at 10:33 AM