All Up in My Kool-Aid 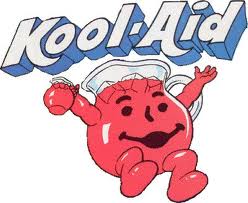 One of my sons is talking to me...my mom chimes in from the next room.  She's not even in the same room and she has something to say.  Blue says, "Mom can I have so and so?"  My mother answers, "He already had such and such."  I say, "Your name is Nana.  He said Mom?  Can I answer my own child?"  They call her the food recorder.  Because she mentally records everything they eat and reports it when they ask for something else.  We also call her, Echo and Kool-aid.  Have you heard the term, "Stay out of my Kool-Aid?"

I am chastising or correcting Red, Blue chimes in.  "Yeah Red...don't you get it? You need to listen to your mother?" Better yet, when Red is being rude and ungrateful....Blue chimes in by being overly gracious just to piss his brother off.

My husband is the only one who doesn't do it.  He says it's been passed down from generation to generation from my mother.  And now that I think about it, my grandmother, may she rest in peace, used to do this also.  I remember getting so irritated with her, because she would offer advice on how to cook certain things that I already knew how do cook.  I distinctly remember her telling me how to make a hamburger patty and me saying, "Does she really think I don't know how do this?" Don't get me wrong...I loved my grandmother beyond belief.  I just hated how she always put her 2 cents in, even when it wasn't asked for.

This all irritates me beyond all belief.  Yet, I do it too.  I consider myself to be the voice of my children.  I think I understand them and their way of thinking better than anyone...including their father.  When I here that there is a misinterpretation going on....I will chime in and interpret for them.  If my husband is being too harsh and aggressive I chime in, "You know Honey, when aggression meets aggression the explosion gets bigger."  Of course he gets really angry when I do this.  He has expressed interest in me waiting until we are behind closed doors to voice my disagreement.  I know he is right...but I just can't seem to stop myself in the heat of the moment.

We all hate when the other person does it.  Red gets more and more irritated when different voices are coming at him when he is already agitated.  Especially, when all of the voices are telling him that he is wrong.  He snaps usually at the incoming voice..."Shut up!" Then we get mad because he's being even more rude.

I just can't tell you how fun it is to live in this crazy house?  This is an endless cycle...a merry-go-round that keeps spinning faster and faster and I want  off.

Please click the ToPMommy lady before you leave!  She's over there>>>
Posted by Karen Wesley Writes at 9:17 AM