Light it Up Blue 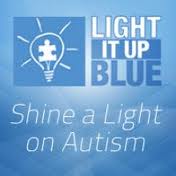 Today I watched Holly Robinson Peete share the very personal story about her son who was diagnosed with autism at the age of 3 on her new talk show "The Talk".   It was emotional,  especially when she talked about the changes in RJ after his 2nd Birthday.  As a mother,  instinctively she knew that something wasn't right.  She was dismissed by others including her pediatrician when she shared her concerns. This struck a cord with me.

During my son Red's 2nd year, I  provided daycare for my neighbor's son.  The boys were only 4 days apart in age.  I thought it would be fun for Red to have a playmate.  I watched as my friend's son who came to me with little to no language and communication, start to speak in sentences.  While Red's language was present, we didn't understand much of it at all.  It was garbled.  In my heart I knew something was wrong.  I  too was dismissed by our Pediatrician.  "Oh he's just a boy.  Everyone develops at a different pace.  Yada, Yada, Yada."

It wasn't until his 3rd birthday that the doctor tired of hearing me, finally suggested that we at least have his hearing checked.   His hearing was fine.  But it was the Audiologist that suggested that we have his speech evaluated by the local school district.   He was evaluated and shortly thereafter, he started in the Preschool Program for Children with Disabilities.

A year lost.  A year of preventions and therapy that could have been in place -when I knew that he needed help.

As a mother -always follow your instinct.  You're usually right.


Our Family was nominated as one of the 25 Most Inspiring Families on Circle of Mom's. Check it out and feel free to vote:

If you really got nothing better to do...you can click here too:

Posted by Karen Wesley Writes at 7:41 AM