Life in the Circus 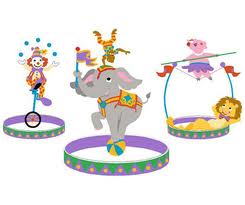 7:25 a.m. -five minutes before it's time to get up for school, Blue hears singing coming through the walls of his bedroom.  He comes running, "Mom!  He's singing! He woke me up!  Why do I have to wake up to this?  He's ruining my morning!  Why does he have to live here!!???"

I try to explain that it's time to get up anyway.  I ask him to lay down and let Daddy rub his back for a minute so that he can calm down.

He's had it with his brother.  He went to bed, not exactly happy because in his opinion --his brother ruined my birthday the night before with his antics.  Now he wakes up to this irritation.

A couple of nights before that Red had a meltdown at bedtime that ruined Blue's nightly routine. When Red melts down it's hard to tell what is acting and what is real.  He screams like Chester from Linkin Park in a rock song.  He can make himself cry.  His words are full of drama.  He blames everyone else for his problems and turns the table on the issue at hand.

"Why are you guys being mean to me? Why do you only care about yourself?  Why are you making me suffer?  Why are you abusing me?  Why do you have to force me to do things? You're not being fair!  You're being selfish!  This is your fault!  This is Blue's fault!"

He balls his fist and hits doors, tables, pounds his bed, harasses the dog, he invades my personal space, follows me around closely.   I assure him that any physical damage will be paid for with his money.  If he doesn't have enough, we will sell something that belongs to him to pay for it.

He doesn't scare me in the least, because I mostly see it as drama  -a way of acting out his pain or frustration with himself.  I have what may very well be a delusional attitude that I will knock the shit out of him if he goes too far.  Mind you -I am 5 ft. nothing and he is 5ft 10" and weighs twice as much as I do.

Blue however, sees Red's behavior as a threat to our safety and security.  It isn't fair that he has to live with this.  Blue suffers from anxiety and these antics make him nervous.  He told his dad the other night, "I'm just afraid that one of these days, he's going to break something or hurt someone."

My husband says to me, "Blue is really nervous and anxious about his brother's behavior.  He says, Red needs to go.  He doesn't want him to live here anymore."

I respond, "He's also nervous and anxious about thunderstorms.  We can't make those go away.  We can't just give up on his brother."  Of course, that's not what my husband was asking but he and Blue are both right, he shouldn't have to grow up with this.

Fortunately for Blue, a very low dosage of medication keeps his tantrums under control.  Where his brother who is on several meds, at maximum dosage, is anything but under control.  He does manage to hold things together very well when he's at school.  Here at home is another story all together.  I swear I hate this whole trial and error psychiatric medication crap!

What is choice,  what is real, and what do we do about it?  I find myself pondering that all too often.  Blue thinks the answer is to send his brother away -give him to another family.  Give him to the circus!  The only problem with that is we live in the Circus.  Just call me the Ringmaster.

I Love Your Comments!
If  you're new to the blog click below to show me some love~

Posted by Karen Wesley Writes at 11:46 AM