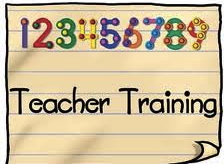 Why should students participate in their ARD meetings? That was the question on the table at a session of the Teachers Improvement Conference in our school district.  Blue was a presenter.

* (Here in Texas I.E.P. are called ARD meetings. Everything is different in Texas!)

For the first time last year in 5th Grade, Blue not only participated in his ARD (admissions, dismissal, review) meeting...he ran the meeting.  He did the introductions.  He ran through the agenda.  Via Power Point presentation, he told us all about his strengths and the things he needs help with.  He told us about his concerns about going to middle school.  He participated in setting his goals and listened when we talked about his accommodations.  It was all about him!  Six adults were sitting in a room to talk about the plan for his education for the next year. 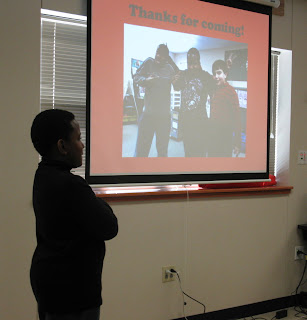 At the conference Blue had the opportunity to inform a room full of teachers about what the experience meant to him.  The point was to encourage these teachers to get their students involved in their own 'Powerful ARD'  meetings.  He said he loved the fact that the meeting was all about him.  It made him feel important and it helped him feel better about going to middle school.  The Special Education Lead from the middle school attended his ARD meeting.  At the end of the meeting she addressed all of his concerns about middle school.

Blue presented at this year's conference alongside the Special Education Lead Teacher from his elementary school, (whose brilliant idea it was to have him involved in his ARD) and two peers, another 6th grader and a 3rd grader.  All of the boys have high-functioning autism.  Blue and his 6th grade friend were particularly articulate and appeared to love being charming and speaking in front of the crowd.  The boy who was in the 3rd grade had participated in his ARD mostly by making a movie so that he didn't have to worry about being nervous in front of a room full of adults.  He showed us parts of his movie during the presentation.  Apparently he is a major fan of Star Wars, as he used the theme music and graphics from the movie in his movie.  It was awesome. 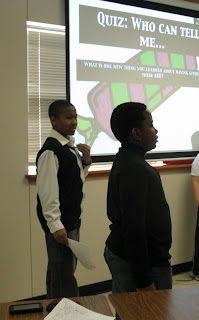 The parents were also asked to speak briefly.  I told the group how having him participate and be involved in his ARD gave him a sense of empowerment and ownership in his education process.  He knows his diagnosis and how it effects him.  Last year, he started feeling really bad about himself asking,  "Why am I different? What's wrong with me? Why do I get so angry?" We had the talk and went through a workbook together.   We were able to turn what was a negative concept in his mind into a positive by giving him the knowledge and helping him focus on his gifted abilities, instead of his areas of difficulty.

This helped him prepare for the process of  being involved in his ARD  process.  He now knows exactly what he needs and he has no problem letting teachers know that.  It helped him have the confidence to go right into middle school and let the teachers know exactly who is is,  what he needs and what his accommodations are.  The very first day he was like, "Hi I'm Blue...did you know I have autism?" He also has no problem letting other students know.  He wants them to understand his differences.

It seemed like the elective teachers were the slowest to get it.  He also had a few little issues with his math teacher at first.  I think that teachers look at his grades,  his test scores and the way he speaks and presents himself and they think, 'This kid is bright.  Why he can't do things just like everybody else?'

His disability is invisible.  They don't always take into account his extreme anxiety, or the way he can misinterpret social situations and even instructions.  Sometimes he just gets overwhelmed and can be unorganized.  He may become distracted by another child making some annoying noise, or by the weather for heaven's sake, and completely loose focus.  He may need extra time to complete an assignment.  He just may not make it through homework if he's had a particularly stressful day, especially if there are multiple assignments.  Just forget about it if you yell at him, or make him feel embarrassed in front of the whole class.  You will loose him completely.

Because he knows what he needs and what teachers should be doing to help him, he will readily let them know when they are not following his individual education plan.  If he is afraid or too intimidated to talk to them directly, he will go to his SPED tracking teacher and talk to her, or he comes to me and I send an email.  Sometimes we sit down and have a chat with the teacher he is having an issue with.

In attendance at the session of the conference was the Transition Coordinator for Special Education in our district.  She was touched so deeply by the boys presentation that she had a John Boehnor moment...tears flowing, though she tried to hold them back.  She told us how important it was for her to change the system in our district.  She feels it's imperative to make the children's needs a priority.  She believes that having the children and their parents involved in their educational process is imperative. She told us about a parent she met at another conference who had always insisted on having her child involved in his ARDS from the time he was 3 years-old.  That student now attends Yale.

As we were leaving,  we walked through the campus full of teachers and administrators, suddenly I could see my boy becoming not just a teacher, but a counselor or an administrator who knows inside and out what students need to be successful in the classroom.  Perhaps someday he will become a leader who will make sure that Special Education students definitely get what they need.  He will know from his own educational experience.

I mean why not? At the age of 11, he is his own advocate and he loves to help others.  He makes me a proud and hopeful mama! 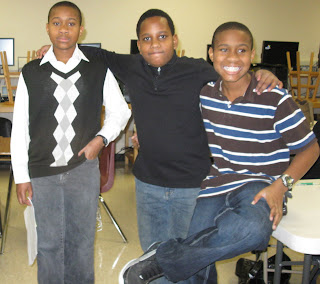 Blue And His friends...yes they are twins

Show Some Love...Click Above! ^
Posted by Karen Wesley Writes at 7:37 AM