Monday morning I got sucked into the abyss of pleading and ultimately arguing with Red to get him up, out the door and to school on time.  On the drive home I found myself angry and frustrated.  My heart was pounding and racing.  I was pissed at myself for allowing him to change my consciousness.

Then I thought, what can I do differently?  He seems to thrive on upsetting me.  How can I get him to do what I want, without getting sucked into his darkness?  It seems like the more I talk to him, the more frustrated he gets, and therefore he moves slower.  I don't think he even knows the definition of hurry or fast.  He has one speed...S-L-O-W.  He turns the simplest request into a power struggle.

I have to figure out ways to get him moving, using as few words as possible.  I decided to set alarms and put them all over his room so that he will have to get up to turn them off.  That night I set his cellphone to go off at 7 a.m. with a ringtone that involves a dog barking. 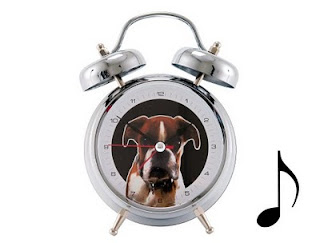 Shortly after it goes off, I enter the room, say nothing, open the blinds which allows the sun to come streaming in. It smacks him right between the eyes.  Then, I open the window to let in some good old, fresh, fall, morning air.  "Stop!...What are you doing?!" he yells.  "Good morning, " I say casually.

Subtly, I grab the cell phone and program it to go off again in 10 minutes. He was down the stairs, dressed shortly thereafter.

On the way to school...I said little to nothing.  Thus he has no audience or response for an argument.  He was on time.  I congratulated myself.  Though, somehow, I knew it wouldn't always be this simple.  It was however, a good start.
Posted by Karen Wesley Writes at 9:22 AM