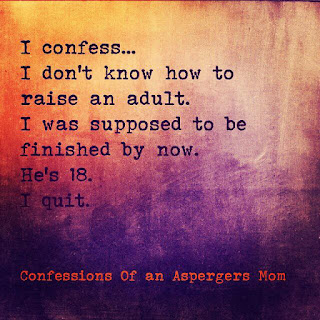 Excuse me while I think out loud.
“This job is stupid.” Driving grown-ass people around all day. For free.
It feels like a waste of brain power.
It's a huge time suck and takes a lot of energy.
I want to use my brain for more than this.

I’ve had plenty of jobs throughout my 52 years of life and I’ve always had the privilege of walking away when I was ready to move on.  Turns out you can’t quit motherhood when you’re burnt out.  I’ve been a mom 24 years and I’m over it already.  I love my kids more than life, but I’m ready to love them from more of a distance.

It’s hard to have a front-row seat to this movie that is transitioning to adulthood.  Autism makes it seem like it’s moving in extra, painfully, slow motion.

The boys are technically adults now (18 and 22).  Because of their autism and anxiety, neither of them drive yet.
It seems like all I do is drive them, give them money, and supervise the spending of money. I’m just so over it.  Especially, since they don’t really want to listen to anything I say.

When kids turn into teenagers, it's like your voice is on mute. You're constantly talking, but nobody hears a word you're saying.  Yet, they still need your help.

Kendal is 22 and would very much like for us to stay out of his financial business.
“Don’t be monitoring my account and looking at my spending!”
That is until he runs out of money and needs help. Then it’s...
“You’re going to let me suffer?”

Um …dude, I don’t have anything to do with your suffering. You make choices, YOU live with the consequences. You can’t keep screwing off your money and then ask us to fix it.

The 18-year-old, Blue, is really just getting a taste of money management and budgeting. He's kind of a big spender for a dude without a job. He loves to eat out. He doesn't want to cook, although he knows how, because he doesn't want to clean up after himself. Right now it feels like all of those independent living skills I spent years teaching him are blowing in the wind.

His executive planning is crap.  I must admit, mine isn’t much better. I am definitely not the most organized, methodical person in the world. But it's my job as his mother, to help him. Whose bright idea was it for me to help other adults manage their lives? I'm clearly unqualified.

Blue seems to have no concept of cause and effect. I try to help him keep his life in order because his lack of planning ends up affecting my life —costing ME time and money.

For example, he doesn't get up on time.
Which means he doesn't have time for a proper breakfast.
He ends up eating on the run (this costs money).
He doesn't take meds because he didn't eat and rushed out the door.
He ends up not taking morning meds at all that day.
He ends up having trouble sleeping that night and subsequently getting up the following morning.
He has an early appointment the next morning and needs a ride, which includes a stop for breakfast (more money) so that he can make it to the train station on time.
This means I get up extra early to take him to the station (5 miles away) because I don't want him to miss the appointment with the Academic Coach.

Of course, he doesn't want to listen to me when I try to get him to plan because I’m nagging him.
Believe me, dude, the last thing I want to do is nag you. Please run your own life, so I don't have to help! Only you don’t seem to have any idea of how to do that.

Sometimes I want to say f*#%-it-all!
I want to run and hide…
One --so I don’t have to watch this bad movie anymore…
and two --so they will stop asking me to do stuff.

I think that Blue would function better if he didn't have me around as his safety net.

I don’t remember anybody teaching me budgeting, and planning or even driving for that matter. I learned out of necessity for survival. I learned by doing. I wanted to spend. I got a job. I wanted to go to college, I applied and figured out how to pay for it. Of course, I didn't have autism, but I'm pretty sure I had undiagnosed A.D.D.

Maybe I coddled them more than I should have. I’ve always been here for them. The stay at home mom —their advocate, their beck and call girl.  Now I’m pissed because I’m ready to quit and they seem to be in no hurry to grow up and be independent.

Wait a minute. That's not exactly true. Blue has been taught to advocate for himself. He has always set goals and gone after them, most of the time without prompt. He has actually always been VERY independent.  Maybe that's why this is hitting me so hard.

The past two years there has been a kind of regression with those independent skills. Part of that reason has been social dynamics, heavy on the male/female relationship learning curve. The other part I think, is that growing up just plain scares him.

Kendal has come a very long way in the past few years. Having him move out, to the group home, which I still hate, did kick him into grown-ass-man gear.  He's working two jobs and now looking at apartments.

They both have their driver's permits, but neither is in any hurry to drive. Anxiety is the main culprit.  For Kendal, most of his anxiety is related to the actual cost of driving. He doesn’t want to pay for insurance, gas and, “What if I get a ticket?”

They both use Uber until they run out of money or the ride is too far and too expensive to pay for. Then I become their personal driver for appointments and errands. Knowing how much Uber charges, I realize I could be rich from all the rides I give alone!

There is essentially no public transportation in our small city (a suburb of Austin) besides Uber and Lyft, which is better than before when there was nothing. Some of these damn roads don’t even have sidewalks.

There is a train and bus station about 5 miles from here that will get you down into the city of Austin. But you have to be able to get to the station on your own, via bike, a ride or whatever.

If you’re on a limited budget, or you have a disability and you don’t drive in this little city, you're screwed. I don't even know why they call it a city. What kind of city has NO PUBLIC TRANSPORTATION?

I know. I'm whining. I'm venting. That's what I do here sometimes...well, a lot of the time. But, hey these are my confessions.

Driving is but a metaphor for my life.

I could easily change it to cooking, grocery shopping, laundry, the care and feeding of adults who don't appreciate it. All of the ordinary things that I do on any given day, none of which, stir my soul or leave me with a sense of fulfillment.

I am an age where I am longing for something more.
My authentic-self is screaming to come out from behind these layers of other people's crap.
I have some ideas about what I want.
But I can’t help but wonder, is there enough time in between drop-offs and pick-ups to fulfill my dreams?
It seems like there is always an interruption, a need to be met, that does not belong to me.
Is fear holding me back?
Am I holding my self back?

I am learning to say no more.
I am learning that self-care is like water, essential to life.
I am determined to feed my soul with more education, whether it be reading or going to listen to a group of women speaking about empowerment. I did this last week. I felt like such a grown-up woman.

In my head I know, just do it. Take one step and then another —one at a time. I don't have to have a map. I just need to get moving.

It's just kind of hard to figure out my life when I'm so busy helping my young adults figure out theirs.
Aren't their people you can hire for this?
There should be.
I have this feeling that it will never be my turn if I don't take it.
No one is going to hand it over willingly.

Posted by Karen Wesley Writes at 10:31 AM